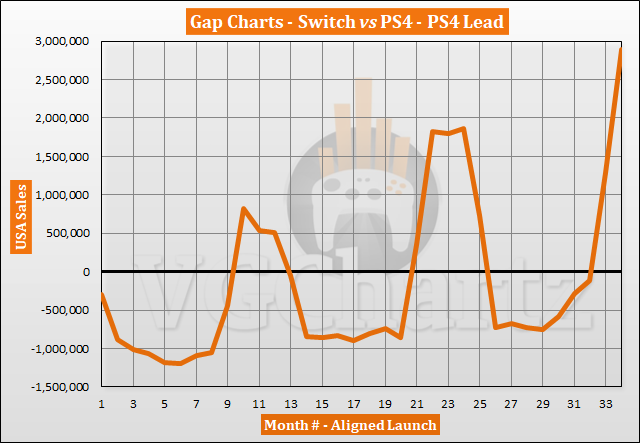 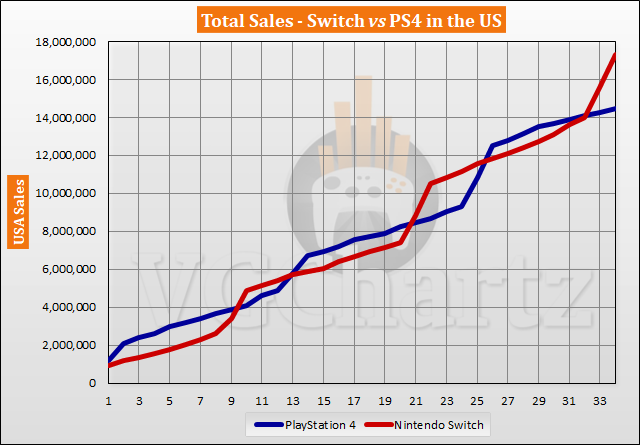 I believe the chart is mislabeled.

yes it is still not fixed, rather obviously after that last christmas, the Switch is far in the lead (and the ps4 never sold that well in the U.S. anyways)

They always word the titles of these charts kind of weirdly. There's a positive and a negative, but the negative isn't negative for what the title is. Even if we were still in October and PS4 were in the lead, the title would still be wrong, because it would show the "PS4 lead" as a negative number. The chart should ALWAYS say "Switch Lead" because positive numbers correspond to a Switch lead and negative numbers correspond to Switch being behind by that amount.

By the end of january, switch will already match ps4's numbers from 2 and a half months later.

Switch's March will match the PS4's November. So PS4's December is April, 3 months ahead of January. By that time PS4 will have 17.8 million at most. End of January is 3 more sales for Switch, and adding the equivalent weeks of last year would put Switch at 17.75 million, but obviously this year's sales will put it above that. I think Switch will actually sell more by the end of January than PS4 will through its entire holiday season to the new year, a full 3 months ahead, and PS4's best 3 months at that.

That means whatever Switch sells in the US in February, March, and April, will be where the Switch's new lead will settle at, and the gap will probably never close again. PS4 already peaked in the USA a year ago, though its second, lower peak (its PS4 Pro peak if you will) is this year, a mere 180k above this past year. If Switch peaks in the US this year, it'll probably sell at least 8+ million, so the gap will start to get huge. Like, as huge as it is now, even after a PS4 holiday. Even if the new consoles start a DS or Wii style decline for the Switch, with PS4's decline having already begun it won't halt Switch's climbing lead until 2023 at the earliest.

Switch released 3 years, 3 months and 2 weeks after ps4. Every end of december for ps4 equals the middle of april for the switch when aligned. Just to be precise.

Yeah, Switch gonna win this easily. PS4 will win worldwide thanks Europe and many other small markets, but Nintendo is very strong in USA.

I agree. It a little early to say that switch will 100% do more lifetime sales than PS4 in US, but it has preety good chance of happening yes. Japan is also switch teritory.

I actually think the switch has a good chance of selling more than PS4. At the very least, it'll be close. I think this year, switch will gain a lot of support and ground from Europe until ps5 releases and that will help a lot in it overcoming the sales of PS4