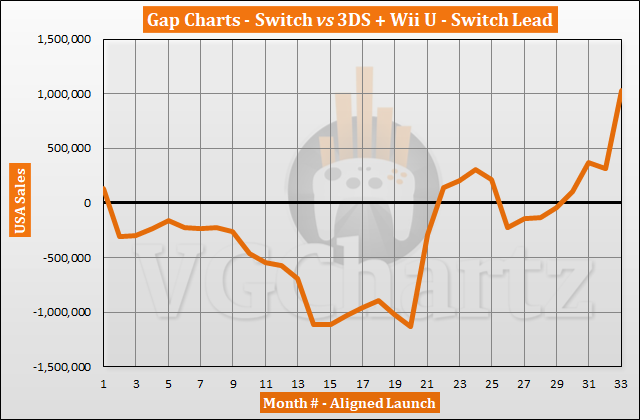 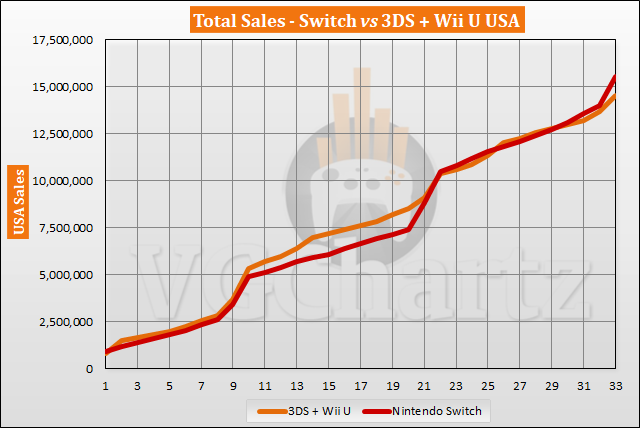 November 2019 is the 33rd month that the Nintendo Switch has been available for in the US. During the latest month the gap grew in favor of the Switch when compared to the combined sales of the 3DS and Wii U during the same timeframe by 717,793 units. In the last 12 months the gap has grown in favor of the Switch by 1.32 million units. The Switch is currently ahead of the 3DS and Wii U by 1.03 million units.

Wii U + 3DS kept up so far, but now it's time to say goodbye and let it go, Switch is sailing away

Switch has a very broad appeal. It is appealing to more than just those who bought 3DS or Wii U.

The Wii U & 3DS won't recover from this defecit, most of the 3DS's sales came within the first 2 years and the Wii U obviously died very quickly entering year 3, I expect the switch to have a far and stronger sales years. Especially once it gets its first real price cut

make 3ds and wii u vs switch in japan, launch aligned

While you are at it, make PS4 vs. Switch in Japan launch-aligned as well.

Why PS4 vs switch in Japan? That makes no sense other than to embarrass and make fun of the PS4.

To beat that combo, Switch would need to sell about DS levels in Japan. Switch is doing very well, but reaching ~30M to beat 3DS+Wii U would be exceptional and a resounding success.

Still, that chart would get very interesting in the next years if Switch sales don't falter along the way.

I know, that's why I've said it and because if the other switch vs 3ds+wii u charts too.

I wish we could put images in the posts. Wii U is like Ralph Wiggum "I'm helping!"