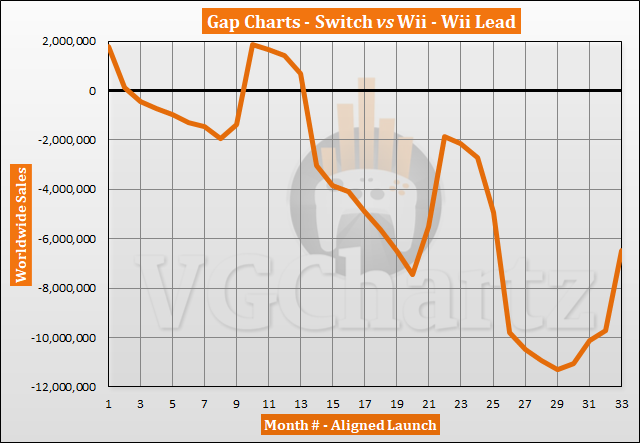 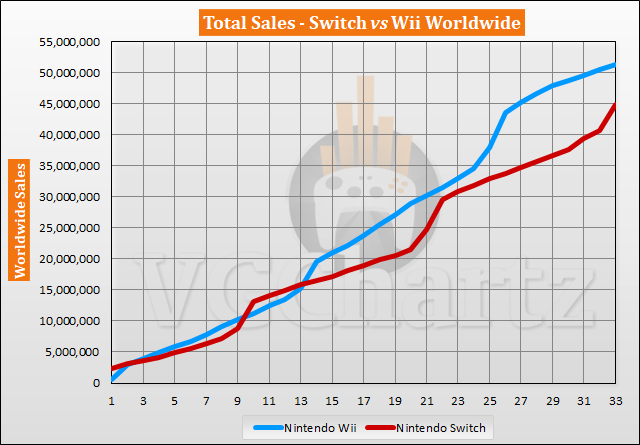 Wii was prematurely abandoned after 4 years, so Switch should outlast it in the long run.

Nah. Kirby, Xenoblade, Zelda Skyward Sword, The Last Story, Mario Party 9, Pikmin ports... they were trying. But in the end, market trends and renewed competition proved to be too much for the aging console.

Xenoblade and The Last Story were late and limited releases, the rest is a pretty poor showing spread over two years.

@haxxiy That's about as many games as Nintendo put on 3DS post Switch launch. So I guess you're right. They didn't completely abandon it. But they didn't give half as much effort as they could have.

The 3DS had games of higher pedigree and more games overall after Switch had already launched, compared to what the Wii got in 2011 and 2012. And of course the Wii didn't see a single first party release after the Wii U had launched. What Nintendo did with the Wii in 2011 and 2012 wasn't trying, rather they turned their backs on the console as quickly as possible, and the non-existence of first party releases post-Wii U launch says it all. The Wii is the only successful Nintendo console that didn't get new Nintendo games after its successor had launched.

Since haxxiy tried to plug the old narrative that the Wii was a fad that was impossible to sustain, I'll plug a thread to cast doubt on haxxiy's ability to analyze Nintendo consoles in an objective manner.

I still can not imagine a different scenario for the Switch. Eventually the collapse will happen one year later for the Switch, but here with just SquareEnix and Capcom, we can see that these 2 big doesn't give a shit about the Switch, they have NO produced at all any serious AAA game for the Switch in 3 years. So once the PS5 and XSX are out, the Switch will only receive heavy AAA games from Nintendo and their studios.

@Amnesia: That only Nintendo produced AAA was no hindrance for Switchsales so far. And well, a collapse - I say PS4 sales will collapse in 2021. :-) Every console will see a collapse in sales eventually, the question is if it happens after 20M sales or after 100M sales. I grew quite confident over the last year, that it will happen for Switch after 100M.

Agreed! Plus, even post-Wii U the Wii managed to sell significantly more software. Nintendo would have been better off focusing heavily on Wii instead of Wii U. Perhaps the whole Wii HD would have been a good idea after all. Something half the price of the Wii U with scalable graphics similar to how PC titles work with different hardware (although, I am unsure if Wii hardware would have this capability). Although, Wii U was just not a good idea. I know it has its defenders, but people need to take off their blinders and stop ignoring the clear problems with the marketability of Wii U (same thing happened with GameCube, and there are still militant fans to this day still fighting for its glory, like old Japanese soldiers on an island in the 1980s not realizing Japan had been defeated decades ago).

Switch is great but the Wii was a phenomenon.
We'll see if it has more longevity.

Well, so far we haven't even had December. This makes me quite hopeful that after Wii's holidays hit the gap will still be smaller than 10M.

Switch will close the gap completely over time, so the only question is the month in which it will happen. By now it's already evident that Switch and Wii follow different sales trajectories and the same holds true for how third party support has developed for both systems. And given how weak Wii's first party support was after year 4, Switch has another significant advantage in the long term.

Yeah, long term. But the question is, if next year the gap will be lower than 10. Or maybe even less, 9M or 8M.

Wii had a very strong holiday in 2009, putting LTD through 38 months at 65m. Switch is going to be at 55m at best at that time, so the gap should be expected to exceed 10m in Wii's favor one more time.

What you see right now in the gap charts is the Wii's rather weak first half of 2009, but Nintendo's game releases in the second half of 2009 coupled with a $50 price cut resulted in a tremendous resurgence.

Ah thanks. So next year we will see the gap grow above 10M once more. Too bad.

I mean it's impressive considering how front loaded the Wii was. That said, Wii still has its legendary 2009 holidays/December to come. After that though the Switch should be playing catch up

As people have said, I really hope Nintendo sticks with this console longer, and perhaps rather than jumping into something like a Switch-U, go for a Switch 2... Updated Switch OS rather than a brand new OS, updated hardware rather than completely different hardware.

Speaking of OSs, the Wii was a thing of beauty. I am sad that it’s all done now. It felt like a party constantly going on, while the Wii U was a little clunky and felt a less like a party and more like a dead mall.

I like Switch for its simplicity, but I’d welcome more Wii-ish channels. Give me something with the news and the weather with a globe to spin around! I do like the Switch’s news channel, but something about it feels a bit off from the Wii. Maybe it’s the style of videos, feel too commercial. I want VC Thursday’s (or whatever day it was) to make a comeback, maybe not “VC” but something like that. Anyway, I am totally rambling. I loved the Wii, and I love the Switch. Perhaps my two favourite consoles ever, although NES and SNES also hold similarly special places in my heart.

@Mnementh I just hope you will remember this discussion. I bet for a collapse when the Switch will be around 70-73 millions just after the fiscal Q3 of next year.