Here we see data representing the global sales through to consumers and change in sales performance of the four home consoles and four handhelds over comparable periods for 2016, 2017, 2018, and 2019.  Also shown is the market share for each of the consoles over the same periods. 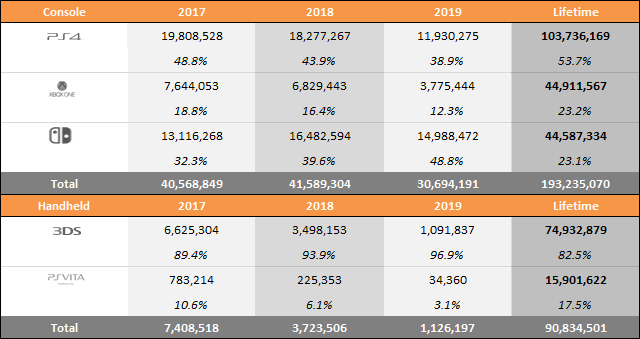 Only 0.1% to go until Switch hits Xbox One's lifetime market share! Then it'll be chasing the PS4 for years to come...

Question is, will it pass PS4's peak with 4 weeks left?

I'm inclined to say yes. It'll be close, but Nintendo tends to have a larger portion of its sales in the holiday season.

Will Switch reach 50 % market share in 2019? Obviously it will be the case next year.

if it weren't the official PS5 confirmation by SONY this year, PS4 would be at least 1M more than now for the year .. but either way it's getting to 15M total for the year with december. As for the switch, december has always been the stronger month for nintendo consoles, so I think switch can reach 20M total for this year. XB1 I expect around 5M with december.

Are we going to have sales of the Nintendo Switch at the launch of the console in China?

It seems likely as Nintendo give their figures every quarter. I don't expect then to change now.

I guess analysts were right that Switch can't compensate the falling numbers of PS4 and XBO and we will see a lower total in sales in 2019 compared to last year.