When you think about political corruption do you also think “that would make a great subject to base a game on?”. How about corporate influence on the media? Xenophobia? Police states? Drug abuse? Public health? Headliner: NoviNews takes these kinds of topics and not only makes them accessible to a layman, but creates compelling plot points to engage with. 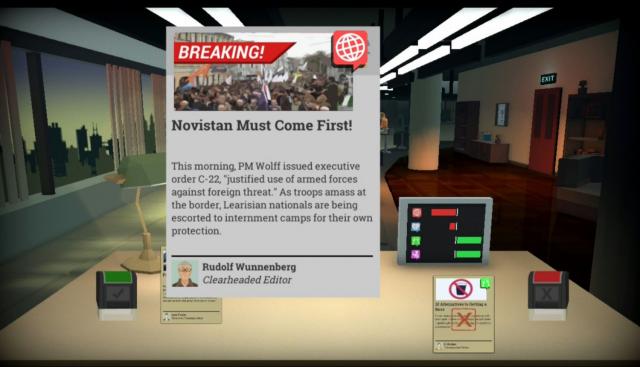 As newly appointed lead editor of NoviNews, a news outlet in the fictional country of Novistan, you’re responsible for choosing which stories get published and which get buried from the public. The game is specifically designed to be short and impactful, as well as encourage you to play multiple times in order to see the different ways your choices impact your country, the people closest to you, and the general public. There are two distinct cycles you’ll be introduced to. The daily gameplay loop of selecting which articles to report, followed by a walk home in which you’re bombarded with the impact of your decisions. The second loop is repeating the 14 day game over again to see what other kinds of outcomes can be created.

Headliner: NoviNews builds on the lore of the first Headliner game in which you play a similar role in the neighbouring country of Galixia. Even though the entirety of the game takes place in Novistan, bordering countries of Galixia and Learis play important roles in the world and your reporting. Many of the game’s political themes focus on Novistan’s Prime Minister stoking fears about Learis and its human modification program’s influence on the local population. This blend of somewhat real world yet not too distant future sci-fi is a fascinating setting to explore very relatable subjects. If you’re not familiar with the original Headliner then the sequel does a tremendous job building the world of these three countries and the tensions between them. 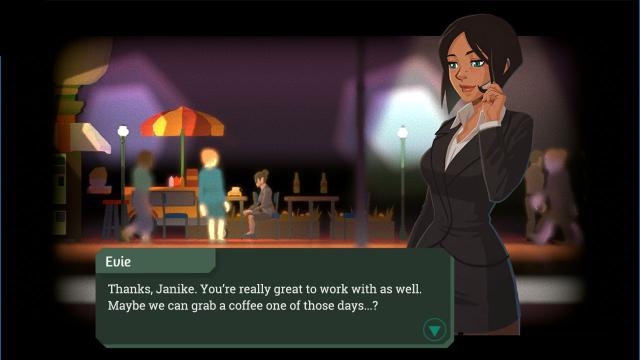 The real substance of Headliner is the walk home after work. That newly proposed national health care bill you promoted/concealed can simultaneously: stress out your colleague who is fretting over waiting times and costs, have your brother rejoice/fret about the treatment he feels he needs, and impact the local hospital with long lines of picketers or graffiti. Very few of the options available to you have simple positive or negative outcomes; each choice will usually have positive consequences for some and negative ones for others. Segregationist articles you promote can make life harder for local immigrants, but also keep out foreign business investors that threaten to stamp out local businesses. No matter how altruistic you attempt to be, there is always some crossfire in the aftermath. Hearing the denizens talk on your way home, meeting with friends, or seeing the picket signs and fresh graffiti are really formative ways to understand the repercussions of your job.

Another highlight of Headliner: NoviNews is the small but memorable cast. You’ll spend time with your brother, a co-worker, your boss, a local shopkeeper, and on consecutive playthroughs a police officer. Each of these characters is dealing with real world issues that your position at NoviNews will directly affect (issues like mental health, financial concerns, feeling like an outsider, and job stress). The writing for each of these characters is admirable and realistic, which is surprising considering the limited amount of time you have with each of them. With all of the heavy topics mentioned above you may think that Headliner is all doom and gloom, but there are playful moments scattered throughout which help greatly in keeping the game from becoming too dark. 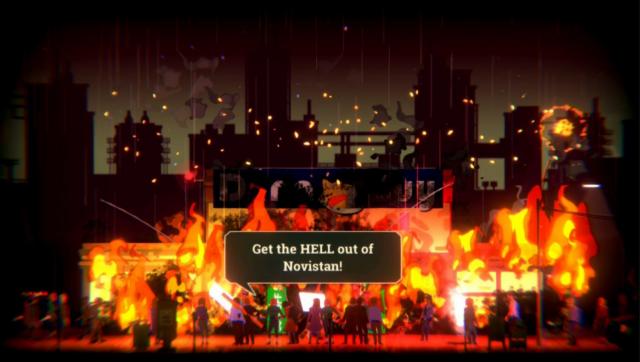 The game offers a variety of customization options, including for things like your gender, appearance, decorating your apartment, or recruiting a pet (either a dog or a drone). While I’m sure some will appreciate these kinds of options I found them to be inconsequential to the game and thus uninteresting. The exception is the pets. Recruiting the dog gives you a companion to relax with after each stressful day and offers some insight into what your character may be thinking. The drone, on the other hand, offers up some of the most jovial dialogue in the entire game, which I welcomed on the days when I could see riots and fires outside my apartment window.

During the final days of your two week stint many of the longer narrative threads begin to culminate, but even at this late point some new ones are still being introduced. I found the personal stories with your brother, co-worker, and police officer to be thoroughly compelling. On the other hand, several of the larger scale narratives don’t quite elicit the same level of payoff, due to lack of time or attention. The abrupt final walk/text scroll back to your apartment can ultimately be unfulfilling as well.

You're bluntly told that the game is meant to be played multiple times, but two runs was ideal in my opinion; on my 3rd and 4th attempts there was just far too much repetition in what was happening for the handful of new story beats to be worthwhile. 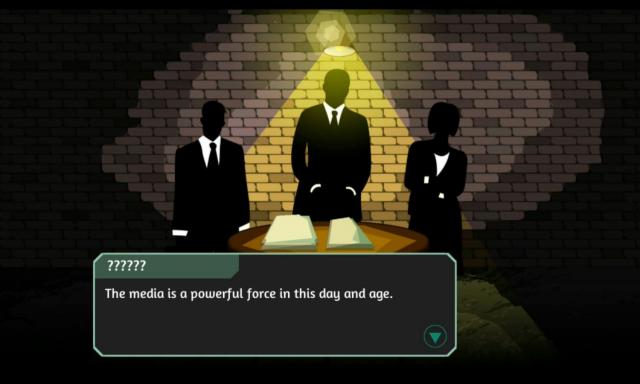 By putting Headliner: NoviNews head-to-head against its predecessor, it's an obvious improvement in every way. It looks far more professional, the music and sound is greatly improved, but most importantly for a title like this the writing is believable. It's evident that the team at Unbound Creations is refining the idea of taking tough political issues and making them interesting, digestible, and thought provoking, creating something special and potentially significant. NoviNews feels like another step towards prominence and I’m excited to see what’s next for the Headliner series.

This review is based on a digital copy of Headliner: NoviNews for the NS, provided by the publisher.