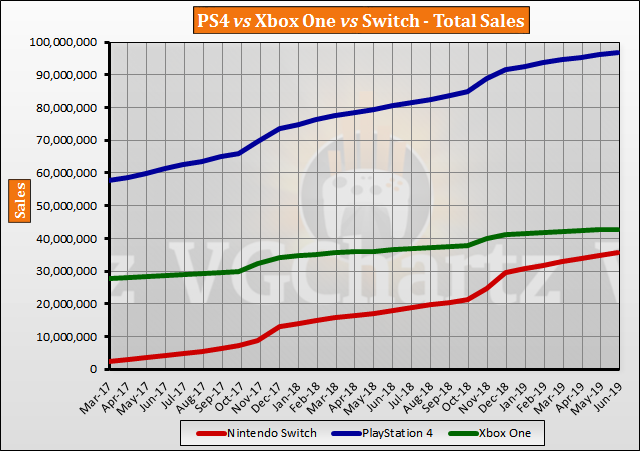 Looking at the total sales of the PlayStation 4, Xbox One, and Switch through June 2019 shows the Nintendo Switch continually to close the gap with the Xbox One. The Nintendo Switch is currently on track to surpass the Xbox One by the end of the year and is now less than eight million units behind. The PlayStation 4 is also on track to easily surpass 100 million units sold by the end of 2019. 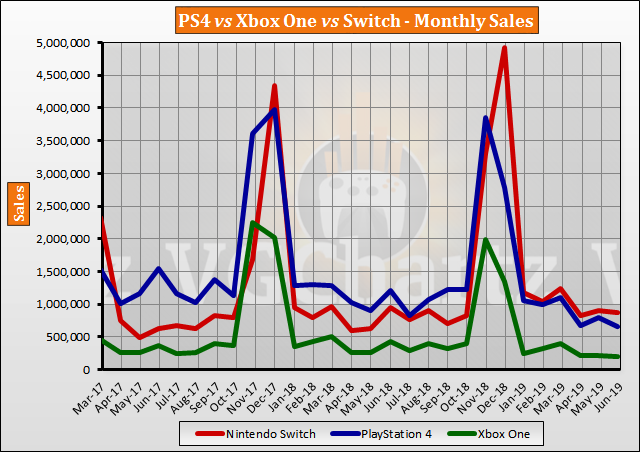 Taking a look at the marketshare, the Switch managed to achieve 51 percent. The PlayStation 4 accounted for 38 percent of the consoles sold, and the Xbox One just 11 percent.

That 55% Market share is holding steady but I expect it to fall to just over 50% when all is said and done. If the Xbox had been able to make it to 60 million then it would be a completely different story. Now its looking like its all up to Nintendo to balance against the PS4. I'm expecting Nintendo to come up just shy.

For the PS4 to have a chance to stay above 50% would necessitate the Switch to stay below 80M, which doesn't look very realistic anymore considering how well it's selling and what is coming for the console.Switch will probably end this year just shy of 50M, it only selling less than 30M after that doesn't sound very realistic.

Since the separation of handheld consoles and home consoles is a bit arbitrary based on how you play them, you could additionally put the Vita and 3DS in there for a total of 280.5M sales, or 34.5% for PS4 as far as dedicated gaming consoles go for those launching since the 3DS.

Counting just the Switch and XBO, with the XBO you'll have pretty close to 50 million, probably just shy, and Switch will almost certainly outdo the 3DS by a good bit, so at least 80 million minimum, So unless the PS4 is going to get above 130 million, it stands no chance. Even if it does get that high, that's a best case scenario. Switch will probably do 90 million, and with good enough legs, might even outsell the Wii or the PS1.

If you count the Wii U as part of Gen 8's sales alongside the Switch and XBO, PS4 definitely has no chance unless it somehow outsells the PS2.

Jumpin's analysis is the only one that makes sense. Somehow PS4 and XB1 totals go back to 2013, but the Wii U isn't included. The "market share" analysis from this article isn't consistent at all.

Well, the question was if the PS4 could keep 50% market share. I could have added the Wii U, but considering how well the Switch is selling, Switch + XBO alone should do it handily already to gain over 50% market share when taken together. So mentioning the Wii U simply wasn't necessary for the argument for me.