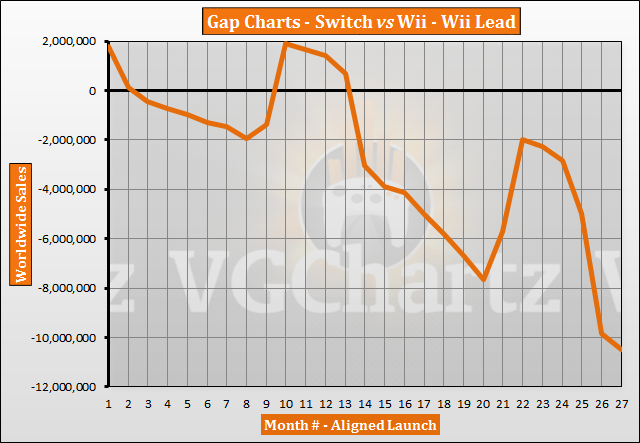 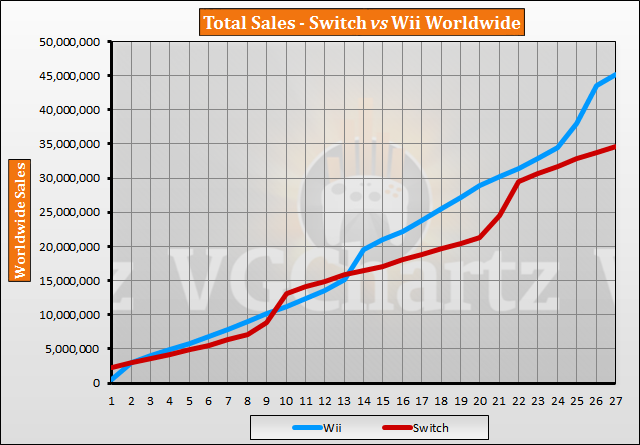 The Wii burned bright, but I wonder if it'll burn long against the Switch.

Even though 10m is a significant lead at this point I still think the Switch can sell more if it endures. Also bear in mind the Wii has had 3 xmas windows here compared to the 2 the switch has had so far.

No console can beat the Wii at the 27 month mark, but there are several that can beat it if they go the distance. Switch is one of those consoles.

That is the really interesting question though. I am not sure at this point, how well the Switch will stand, if next gen really is coming (meaning new games using the new hardware, not the first year). But we are close to the point where we can start to see how long the Switch can endure.

I don't see how Sony and Microsoft consoles can affect the Switch at this point. The early buyers of these consoles are going to be people willing to shell out $500 (or equivalent depending on territory) for a high end console. These are the people who will either not get a Switch or see it as a secondary console at best.

That and it's almost guaranteed that the Switch will get a cheaper model and/or price drop before they launch.

Mnementh, why do you have to hate? Remember, Switch launched into PS4's peak year and ended up with the record for the best sales over the first 12 months of a console's life. If you want to be concerned, you should fear what Nintendo could do, because they are a much more serious threat to Switch than any other company.

I don't hate, I am curious about what will happen. The reason I have doubts is, that a big selling point for Switch currently is 'console experience on the go'. If PS5 and Nextbox release they will transform (slowly) the image of 'full console experience'. In result the perceived value of the Switch might drop and therefore it's sales. But there are multiple ways how this can play out. One possibility is that Nintendo switches to marketing the Switch more as a mobile device - which were also always good sellers for Nintendo.

Oh, I see. The concern is that Switch will fall victim to what the PSP and PSV fell victim to in America and Europe. Both Sony handhelds launched about two years before the corresponding PS home console, so "console experience on the go" only worked for a limited time, or in Vita's case, not at all.

The catch, however, is that Switch isn't selling for the same reason. For one, Switch is a hybrid console and sees plenty of use on TVs. About a quarter of the owners in America and Europe use it (almost) exclusively as a home console. Two, "console experience on the go" means something entirely different anyway. Switch is not about offering the PS or Xbox experience in portable form and the software sales should tell you as much. Switch is about the Nintendo experience, so new PS and Xbox consoles won't have an impact on Switch sales. And three, Switch's real selling point is that you can continue to play the game you started at home anywhere you like with no strings attached.

Sony and Microsoft (and Google) are moving in a direction where playing anywhere, anytime is a topic. Their solution is to use the internet for streaming. Nintendo's solution is much more convenient, so if multiple other companies push into that direction, the perceived value of Switch will actually rise.

You might be right, I am not completely sure though. But as I said, the effects either way should be visible not too far in the future.

Just look at the Wii go! From a difference of a couple of million it reach a 10m gap in just around three weeks!

Honestly, I feel like with PS5 and NextBox on the horizon, the Switch will fall off sooner than the Wii did.