Bushido and the Art of Dandyism: The Awakening of Nagoriyuki in Guilty Gear -Strive-

Sometimes taking a look at the history of a specific game developer can unearth some fascinating projects that one might not have heard of or expected to see in the company's back-catalogue. Case in point, Silicon Studio, today best known for creating the 3DS JRPG Bravely Default and its sequel Bravely Second: End Layer, has a very interesting library of games under its belt that most people likely never even knew about.

Throughout its lifetime Silicon Studio has almost exclusively developed games for handheld systems and mobile, but back in 2009 the company developed its first and so far only home console title – 3D Dot Game Heroes for the PlayStation 3. 3D Dot Game Heroes is an action RPG heavily inspired by classic games of the genre from the third and fourth generations of consoles, most notably Nintendo's The Legend of Zelda series. 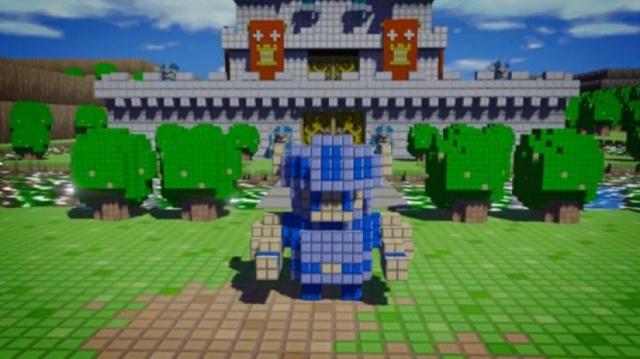 These days it's not all that uncommon to come across fairly high profile indie titles that were obviously inspired by games like The Legend of Zelda: A Link To the Past. Whether it's game like Minit, which create their own unique twist on the formula, or ones like Blossom Tales, which follow the Zelda style much more closely, fans of those types of games are very well catered for. However, there was a fairly long period of time starting in mid-90s when games like that really didn't get much attention at all, although to be fair not all that many were even made in the first place.

Much of this came down to the rise of 3D when consoles like the original PlayStation and the Nintendo 64 were released. 2D simply fell out of fashion at the time, as everyone wanted to see what this new dimension could bring to the table. Unfortunately, with this we also lost a lot of variety for a long time from the world of games, and among those lost were old-school action adventure games in the vein of The Legend of Zelda. Outside of Nintendo's own output, which itself was mostly on handhelds, that particular style of game was largely abandoned. 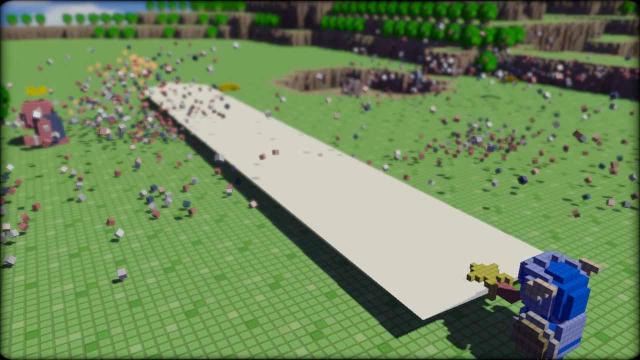 Eventually, though, many of these genres began to slowly revive, generally coinciding with the rise of indie games around a decade ago. Although not strictly speaking an indie game because it had some decent-sized publishers behind it, 3D Dot Game Heroes fits into that mold. Created by a small studio and worked on by people who grew up playing those old NES and SNES action-adventure games, it was as much a love letter to those classics as it was a genuinely well made game in its own right.

Since it's a fairly tongue-in-cheek homage to both old action-adventure games as well as retro games in general, it makes sense that the story and lore of 3D Dot Game Heroes is filled with humorous references to various classic games, as well as to the time when 3D was becoming the new big thing in the video game industry.

3D Dot Game Heroes is set in the Kingdom of Dotnia, a land that was once a pixelated 2D world but which made the swap to 3D when the king deemed sprites to be outdated. As a result the world is now entirely 3D, while still retaining the pixelated look of the old kingdom, hence the name of the game. It's a cute reference to the period in video game history when 2D was seen as outdated and seemingly every game series was trying to reinvent itself in 3D. 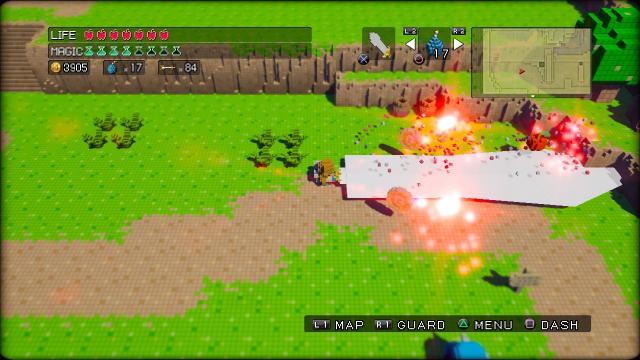 The gameplay is basically old-school Zelda. If you've played A Link to the Past then you know exactly what to expect. You can explore the overworld, go into dungeons filled with puzzles and enemies (and a boss waiting at the end), find various special items, and so on. It's the Zelda formula pretty much exactly as you know it. 3D Dot Game Heroes even includes a powerful ability whenever the player is at full health, although here it takes the form of a massive, room-sized sword, rather than a beam the weapon fires.

Another interesting aspect of the title is the fact that you can actually create your own characters block by block, using the character editor, which effectively lets you build pretty much any character they want. Naturally there are a number of pre-existing character models to choose from as well, but it's a nice additional feature regardless. Another curious feature is the game's monster encyclopedia, which you can fill by beating the relevant monsters over the head with a book until their information appears in it.

Any fan of 16-bit video game music will feel right at home as well, as the game carries its retro aesthetics to its score. I don't think it's necessarily an all-time classic video game soundtrack, as none of the themes really remained with me after finishing the game, but while I was playing it I very much enjoyed the score, not least because all of the tracks fit the game's style perfectly.

3D Dot Game Heroes was released on November 5, 2009, on the PS3 in Japan, and then in May the following year in the west. Despite its obvious niche appeal its sales, especially in North America, were far above expectations. According to Atlus, which published the title in North America, it sold 160,000 copies by October 2010, which was over six times the number it had forecast. Overall, 3D Dot Game Heroes sold over 500,000 copies worldwide, with the majority being in the west. 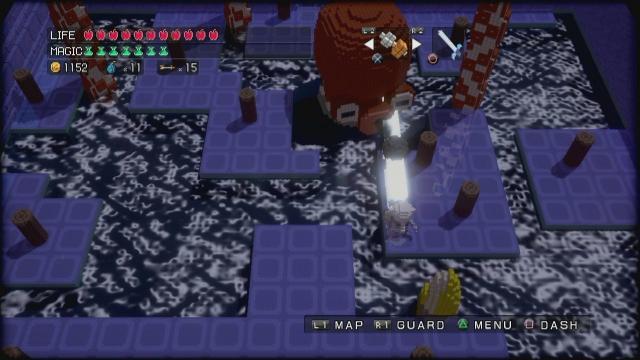 This time it's fairly easy to point out the reasons why the game quickly faded out of memory. The most obvious is probably the fact that 3D Dot Game Heroes never had any kind of serious marketing push when it was released, and why would it? It's not the sort of game that sells millions of copies, being a niche title within an already niche genre, especially at the time of its release. Atlus itself didn't expect the game to sell more than 30,000 to 40,000 units in North America.

Despite the much better than expected sales, 3D Dot Game Heroes was still a fairly small game in terms of reach. Most gamers probably never even knew of its existence, even if they were fans of the genre or old-school Zelda games. It wasn't promoted or really even mentioned much before or after release, and what success it had generally seemed to come from word of mouth. 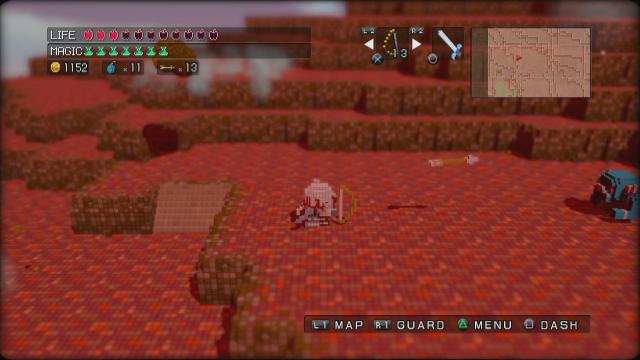 There's also the fact that at the time Silicon Studio had no real pedigree as a developer, with 3D Dot Game Heroes being just the second title the company had ever created by itself. In addition, the studio quickly moved on to other projects, and a few years later it would find even greater success with the release of Bravely Default on the 3DS, leaving whatever games the firm had developed before that (including 3D Dot Game Heroes), as little more than footnotes in the developer's history.

Another contributing factor, although perhaps to a lesser extent, was the release of The Legend of Zelda: Spirit Tracks just a month after 3D Dot Game Heroes came out in Japan. What attention it may have been able to garner upon release was at least somewhat lessened by the release of an actual Zelda game around the same time, especially in Japan.

Why Should 3D Dot Game Heroes Be Remembered? 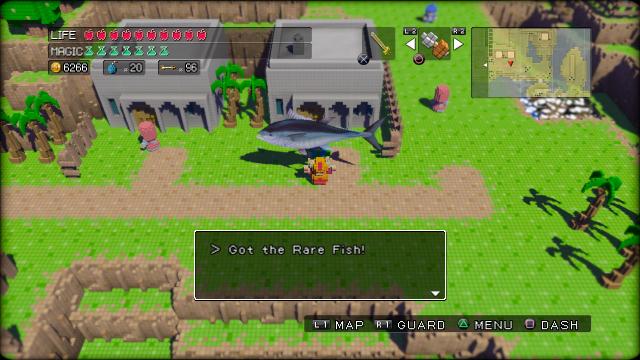 Although 3D Dot Game Heroes is absolutely shameless in ripping off The Legend of Zelda, that's partially what makes it so fascinating. It's at once a homage to and a loving parody of those classic titles, and it's very clear from various small details in the game that the people behind it were fans of old-school Zelda especially. It doesn't try to hide its source inspiration at all, and in many ways that actually makes it a better game. After all, if you're going to borrow heavily from a game or series, it's a good idea to choose one that's great to begin with.

However, that doesn't mean that 3D Dot Game Heroes has no identity of its own. For example, the excellent visual design and unique art style immediately gave the game something entirely its own, especially back in 2009. In addition, certain aspects of its classic design are given a new spin, such as the way the empowered sword works, becoming massively oversized. Little touches like that one, which actually impacts the gameplay, push the game beyond lazy copycat status. 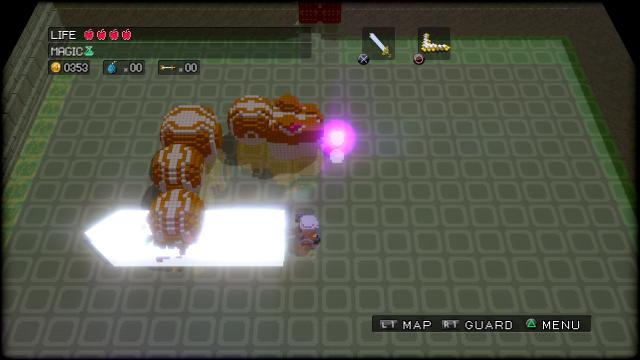 Quite frankly, if you're a fan of classic Zelda and can manage to track down 3D Dot Game Heroes then you owe it to yourself to play this game. Everything it does feels at once familiar and new. The overworld, the dungeons, the gameplay, visuals, and music are all reminiscent of games like the original The Legend of Zelda and A Link to the Past, but thanks to clever design choices and tweaks to the familiar formula, 3D Dot Game Heroes still feels fresh at the same time.

Perhaps the only issue that might arise is actually finding a copy, as it was only ever available on the PS3, and because of its relative rarity copies today might cost a fair bit. Still, if you can find one for a decent price then it's well worth the time and investment. It's not a masterpiece by any means, but I feel like it doesn't really try to be one either; it's just a fun, lighthearted adventure in a style that many people are very familiar and happy with.

Would it be possible to note at the end of these hidden gem articles where one can buy those games nowadays?

I'll try to remember to do that from now on. Unfortunately with 3D Dot Game Heroes the game was only released in physical form, so I can't point you to a specific store to buy it from. However, I've seen it still available on a few online retailers, so those would be your best bet with this one. Used copies are probably still around as well, just a matter of finding them.

Literally one of the best games I played last gen. Just as fun as any of the old school Zelda games if anyone is a fan. So glad I own a copy of this gem.

Wonderful game - for me, even more enjoyable than some of 2D Zeldas it copies.