Tweet
by Thomas Froehlicher , posted on 25 February 2019 / 2,443 Views
Despite seemingly being more anticipated than New Super Mario Bros U Deluxe, both Kingdom Hearts III and Resident Evil 2 were beaten by Nintendo's Switch port in Germany in January, as reported by the German gaming association. We'll have to wait until next month to see if this was mainly down to the Switch title's earlier release date, but the Switch's audience continued to heavily support the platform in Germany across the board, not just by purchasing the platform's major new release of January but also major evergreens like Mario Kart 8 and Super Mario Odyssey. 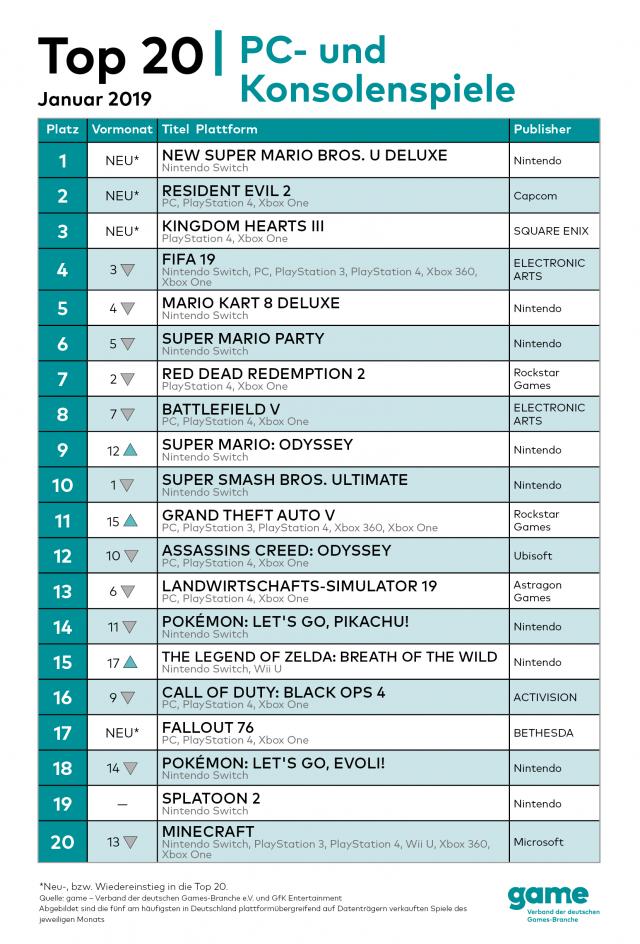 Battlefield V is managing to hold out in the top 10. EA's game remains ahead of its direct competitor, Call of Duty: Black Ops IIII; something that hasn't happened in other European markets.
New milestones were also announced for Germany. New Super Mario Bros. U Deluxe, Kingdom Hearts III, Resident Evil 2 all sold more than 100,000 units, while FIFA 19 sailed past the 1.5 million copies sold mark in January.

Holy crap, are you kidding me!? Totally unexpected xD

Switch is a beast in Germany. That is almost half Switch exclusive in top 20. Im happy that all 3 games did well.

Didn't see that coming. Nintendo seems to be pretty big in France and Germany.