I’ve always found the roguelike to be something of an enigma; it’s a bit of a love-hate relationship when I play these types of games. Their grindy, challenging nature - emphasizing randomization, persistence, and often luck - are elements that can both benefit and harm the game in question. This depends, of course, on how they’re implemented. In Exordium Game’s Last Encounter, the uglier elements of the roguelike unfortunately tend to rear their heads more often than I’d like over the genre’s more endearing qualities. The end result is a hectic retro style space shooter, whose weird quirks, gruelling difficulty, and sparsely given upgrades often bog down an otherwise fun and exciting experience.

In a sense, the gameplay of Last Encounter feels very familiar; it’s an oldschool twin stick shooter that has you firing away at an onslaught of alien spacecraft while dodging projectiles and notching power-ups. But the game dials back the progression elements and skimps out on handholding, making for an experience that is equal parts intense and frustrating as you fight to survive in the hostile depths of space. It essentially takes the mechanics of a SHMUP and injects some free-roaming elements. In typical roguelike fashion, you’re also thrown a lot of random elements, including the behaviors and types of baddies, the powerups given, and even the layout of each stage. 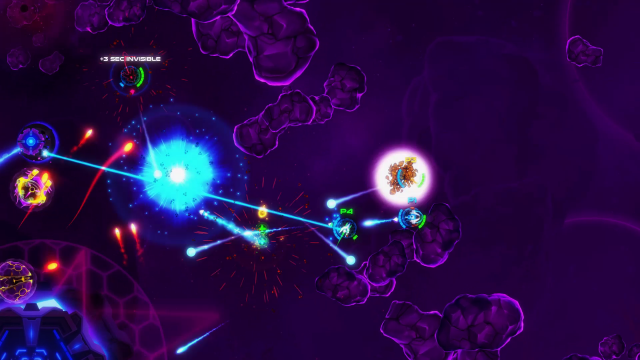 The only constant is that - once you’ve decked out your ship at your home base - you must bounce around a set of 5 or 6 areas, searching for 3 portal keys to proceed to the next set of stages. It may seem straightforward, but the layout of the map, locations of each key, and individual areas get reshuffled every playthrough. This random chaos allows for a somewhat unique experience during each run. However, it also can lead to premature deaths, as you’ll sometimes be thrown into a particularly sticky situation by sheer chance with little preparation or sufficient artillery.

You’ll soon find that you’ll be perishing a great deal in your outer space voyage, especially in the early-goings. The difficulty curve is very steep, and while you’ll eventually grow strong enough to plow through the first biome or two, it takes a lot of grinding to accumulate enough wealth to unlock significant permanent upgrades. While you thankfully have a rechargable shield, your actual health bar does not recharge, and the game doesn’t offer a ton of health packs. Thus, when clashing with a particularly tricky group of enemy spacecraft, you’ll often find you have to retreat from an onslaught of gunfire while your shield regenerates, making you quite vulnerable.

Last Encounter contains a variety of ships, players, and weapon customizations, all of which come with their own stats to more-or-less accommodate your playstyle. If you fancy speed and stealth, you can pick a ship that is quicker and comes with a cloaking special move. If brawn and stamina are more your style, you can also opt for a ship that can take more of a beating while dealing out more damage and shield itself temporarily. The major selling point of the game, though, outside the procedurally generated worlds and variety of unlockable players and ships, is the wide range of weapon combos. 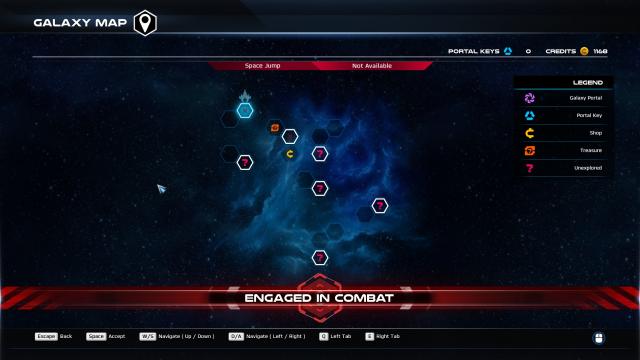 You’re granted three weapon slots, each of which serves a different function; you’ve got the type of weaponry, spread, and behavior for each. So you might, for instance, settle for a poison submachine gun, or a heat seeking, triple shot, laser beam. These prove to be a mixed bag, and usually come with strengths and weaknesses, depending on your situation in battle. I personally found the laser to be more effective for drilling through environmental hazards and walls, but ineffective on most larger foes. On the other hand, the submachine gun packed more of a punch on the beefier baddies and bosses, but proved erratic and inaccurate, making it tough to take out smaller foes.

The mixing and matching of various weapon types definitely managed to inject some enjoyment and ingenuity into a genre that can manage to feel stale. Yet, the game tends to provide these to you at a trickle, and you’ll often find duplicates. Most of them are only available upon discovering them in game - either picked up randomly or purchased at a store. Considering how tough this game is to penetrate, real progress courtesy of these powerups will likely come at a snail’s pace. You do also earn temporary buffs during your run, but in punishing roguelike fashion, these are also reset once you perish. Speaking of which, the game could also do a better job communicating what many of the buffs and powerups do, as there's no clear descriptor aside from a brief blurb upon picking one up. 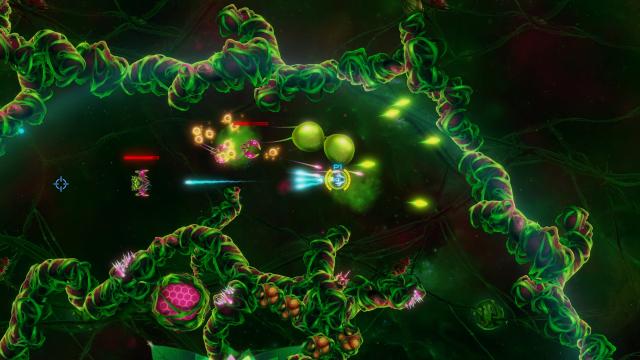 Still, if you’re willing to take your lumps, Last Encounter is a pretty well-crafted and enjoyable game beneath its tough and intimidating surface. It really can be fun to find that magical weapon combo and unleash hell with it on a swarm of enemy ships. The mechanics are solid, the action is plentiful, and the controls are tight and easy to get the hang of. A game controller is certainly recommended, but the game isn’t unplayable with the keyboard and mouse set-up either.

The level design doesn’t have a ton of depth, and each of the handful of worlds look similarly dark and dull graphically, with most of the distinctions coming in the form of color overlays. Regardless, the environments at least come with their own unique types of foes and hazards which affect the dynamics of the gameplay. One biome is riddled with black holes that affect your movement and yank you around the screen, while another comes with enemies and obstacles that explode into poisonous clouds which eat away at your health. These hazards are so prevalent that they can arguably be a burden and get in the way of the shooting gameplay at times. Yet, those looking for an extra challenge and unique element will certainly find it here. 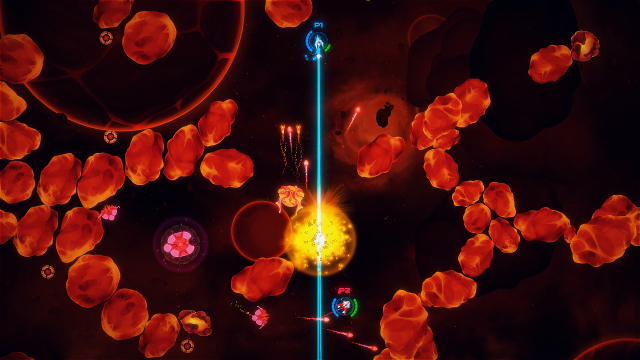 Another neat inclusion is the ability to play 4 player local co-op. Having four ships flying around manically shooting at waves of enemies does have a tendency to clutter up the screen, and makes it tricky to keep track of yourself at times. Still, it adds an additional element of excitement, not to mention provides some needed additional firepower. It’s definitely a selling point for those with friends ready and willing to engage in some airborne alien hunting.

At its core, Last Encounter provides a fun experience that borrows elements from the shoot-em-up, while embracing roguelike qualities of randomization, and implementing plenty of customization. With that said, there are some quirks that get in the way from time to time, between the excessive environmental hazards, to the erratic difficulty curve, and the slow pace of granted upgrades and progression. If you’re a glutton for punishment and space shooters are your bread and butter, I suppose this warrants a mild recommendation, especially if you plan on delving into the co-op mode.

This review is based on a digital copy of Last Encounter for the PC, provided by the publisher.