Wildlands or Mildlands? My Time With the Ghost Recon: Wildlands Beta - Preview

Tweet
by Brandon J. Wysocki , posted on 07 February 2017 / 11,528 Views
The closed beta for Tom Clancy’s Ghost Recon: Wildlands ran from February 3rd through the 5th.  I put it in a fair amount of time with the beta over the weekend, completing all of the main story missions available, a number of the optional side missions, and also spent a fair amount of time exploring the area that was accessible in the beta.  These are my thoughts on the game so far.
The World
Set in Bolivia, the Tom Clancy’s Ghost Recon: Wildlands opens with a US Army special operations unit called “the Ghosts” aboard a helicopter.  They are given a briefing detailing how a DEA agent was kidnapped, tortured, and killed by the Santa Blanca Cartel, prompting their trip to Bolivia.  You’re dropped off from the helicopter and your experience begins. 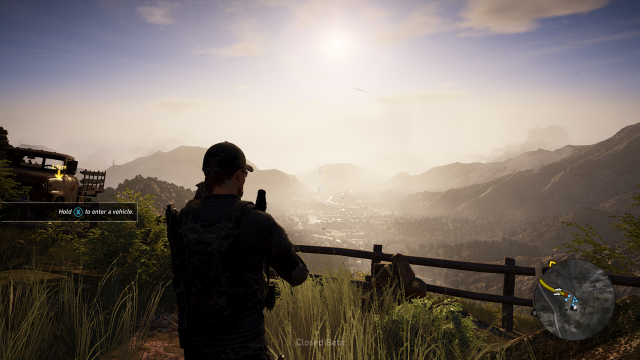 Right away, I was struck by the size of the world.  From the height you begin at, the expanse is staggering.  As I took in the impressive view, doubt that I could actually explore all that I was seeing immediately sprang up.  I was delighted to learn that in fact I could explore it all.  Now, eventually I came to boundaries of course, but those restrictions were seemingly because it was just a beta; it's actually stated in an intro video that the beta is confined to Itacua and that this represents just one of the game's 21 total regions. 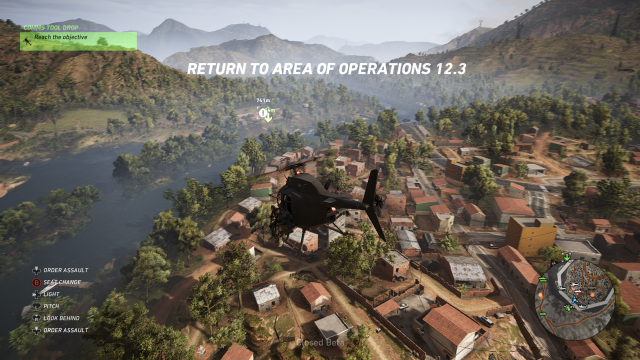 At one point I plotted a path from near the northern border of the region available down to the southern edge at a slight angle.  This measured an impressive 6.4 km (that’s nearly 21,000 feet for those who, like me, still rock out with imperial measurements).  I believe the entire game world was shown on the map, and using some very crude methods, I estimated one diagonal measurement of the entire map to be at least four times longer than the 6.4 km path I had plotted.  Ultimately, I’m expecting the map to weigh in at 80-100 square miles, which, if accurate, would make it about twice as large as Fallout 4 or, perhaps more relevantly, Grand Theft Auto V's map size. 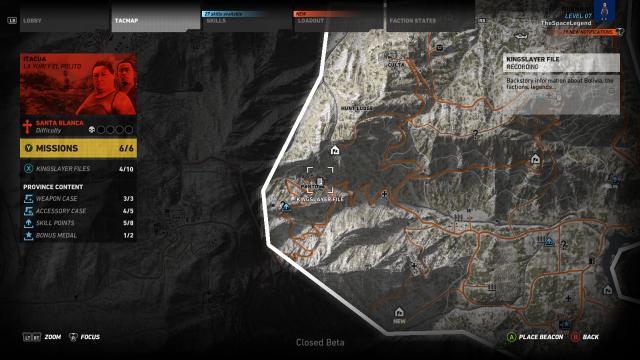 Regardless of the accuracy of my estimate, even just the one region of Itacua felt very big.  But size isn’t everything (right, guys?).  Going back to Grand Theft Auto V as a reference point, the area felt a lot like the northern, rural, portion of that game world.  Amidst the mountains and trees, there were small villages, farms, and enemy encampments. 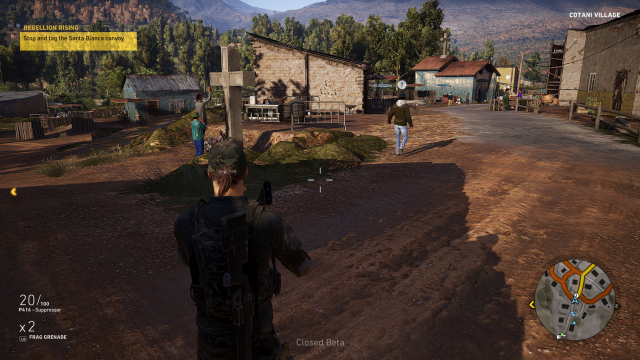 The environment felt genuine in terms of people and places.  There was no shortage of areas to explore, and a pleasant amount of vehicles available to traverse the land from fairly run-of-the mill-cars, trucks, and dirt bikes to boats, helicopters, and even a plane.  There’s a day/night cycle as well as dynamic weather and events.  Using a second account and running through parts of the beta again provided a significant difference in enemy encounters and weather.
Graphics and Sound
My take on the graphics is similar to a lot of other games this generation.  They get the job done, but aren’t necessarily exceptional in any way.  I’m sure the impressive scope of the game limits what they can do with the graphics, and I’m fine with that.  The graphics don’t detract from the game for me, and, especially when combined with some nice lighting effects and the sense of scale, offer up some really nice moments. 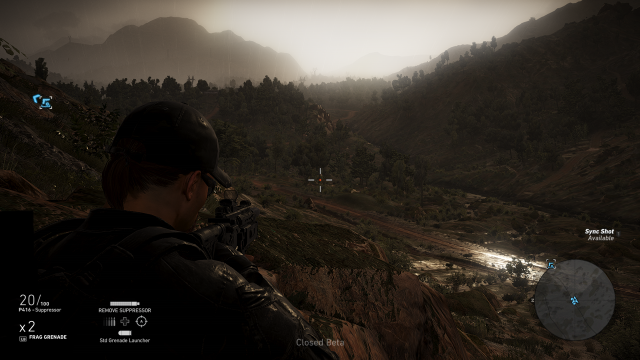 I certainly wouldn’t mind if the graphics got a bit of a boost by launch, but as it is, they’re fine, just not much more than that.  Assuming some of the reduced detail, or details popping in, sometimes from as close as 20 feet or so, is a necessary sacrifice in order to make the game world as large as it is, then I think the development team has hit a very good balance.  The sound design is very similar, in that it has some nice touches (in particular I recall bird calls in the wilderness really popping out), but, even though the sounds of weapons and vehicles are believable, it's not exceptional.
The Gameplay
I’ve been a Ghost Recon fan since the original title released on the original Xbox.  But it’s been years since I’ve played a game in the series, at least in part because it’s been years (about five) since the last entry in the series.  I’ve heard some say that Wildlands plays a lot like Future Soldier, but given this time gap I don’t feel confident in saying something like that.  The third person view is probably at least sort of similar to Future Soldier, but it definitely doesn’t feel or play like the first few games in the series.  That isn’t necessarily a bad thing, however. 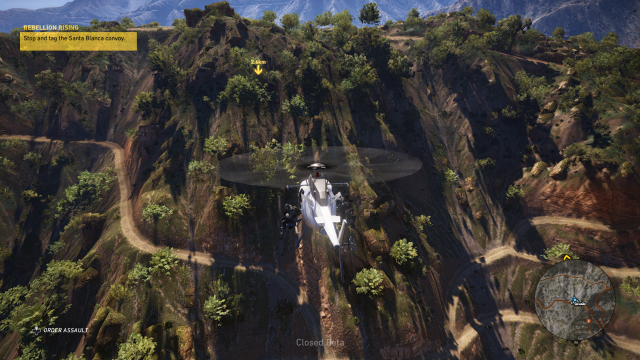 The selling point of this game is the large open-world and the co-op for up to four players.  To that end, it feels very much like the gameplay of The Division set in the world of a Far Cry game (not much of a coincidence, I’m sure).  It feels like a pleasant improvement over The Division, mainly because the gunplay feels much more satisfying.  A single, well-placed shot can take an enemy out (no bullet sponges here).  By default, when you hit the left trigger to aim, the game zooms in from third person to first person so that you're aiming down the sights.  A click of the right stick (or changing of that default in the options) zooms in, but remains in third person view.
In addition, it handles stealth pretty well, despite the fact that it lacks a dedicated cover system/button (your character will automatically take cover if you nestle up to a wall, and for the most part this works well).  All the same, you can sneak around enemies, or up behind them to knock them out or grab them in order to interrogate them. 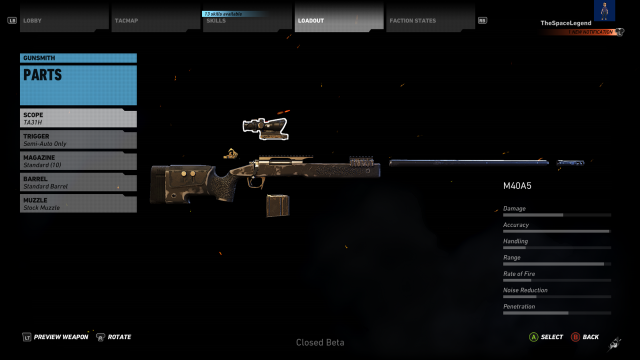 There’s a lot of customization options in clothing and weapons, which feels pretty different for a Ghost Recon game, but I welcome it.  I unlocked a number of weapons and weapon accessories in the beta, and judging by the number or items still showing as locked, there will be plenty to find and utilize, and I have no doubt that many gamers will get some pretty good mileage with that.  Additionally, there are pages and pictures you can find to expand on the story.  So, while you can expect plenty of shooting along with some Grand Theft Auto-like shenanigans, especially when playing with friends, I saw enough to make me believe there will be collectibles and customizations to nicely round out the experience.
I really enjoyed the stealth and strategy of the game.  Droning out areas with enemies, then taking them out quickly and quietly (or at least trying to) was really enjoyable.  I especially enjoyed waiting for the cover of night to carry out missions.  Once, that approach allowed me to make a dent in enemy forces by taking out four sleeping enemies.  Another time, a rain storm in the night provided an awesome vibe as we snuck into an enemy campsite and took them down. 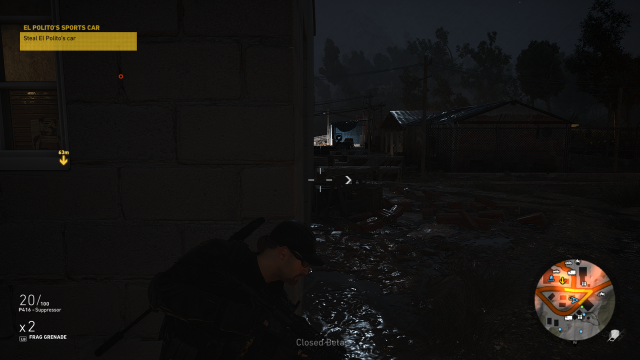 The open-world shooter, with its stealth options, day/night and weather system, and setting, evokes (positive) comparisons to Metal Gear Solid V: The Phantom Pain.  Wildlands doesn’t feel as smooth or polished as The Phantom Pain yet, but it also isn’t encumbered by an over-the-top story.  Which brings me to the next point.
The Story
The story certainly doesn’t contain any of the convolution of a game like Metal Gear Solid V, but it also doesn’t have much depth or charm.  This simplistic narrative, along with the portrayal of different characters that is nothing to write home about, makes it pretty dry.  That said, by the end of the last story mission in the beta, some of the surroundings really had begun to add nicely to the experience.  At the end of the day, I’m not expecting a lot from the story. 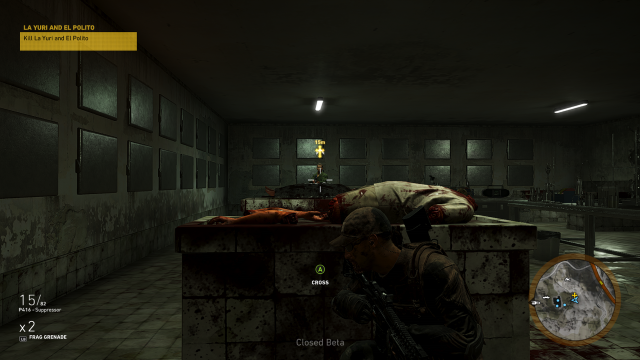 I have a feeling the story will just be an excuse and a loose-guide to keep you moving forward in the massive world that you can easily get off-track in.  I myself am okay with that.  Sure, I love a game with a good narrative, and while this one isn’t bad, it just felt uninspired in the little bit I experienced.  I think the strength of the game will be the gameplay, the world, and the experience.  In those aspects, I saw a lot of promise, and I’m all for games like that (at least occasionally).
Final Thoughts
When I saw the first trailer for Wildlands, I was deeply intrigued, not just because I’m a long-time fan of the series, but because of what I saw.  The beta did nothing but add to my interest and anticipation.  Though I don’t feel super confident in it, it seems offline will be an option (Ubisoft has been leaning towards online-only in some of their recent shooters), and plenty enjoyable based on the performance I saw in the beta of the AI squadmates who stand in for human partners. 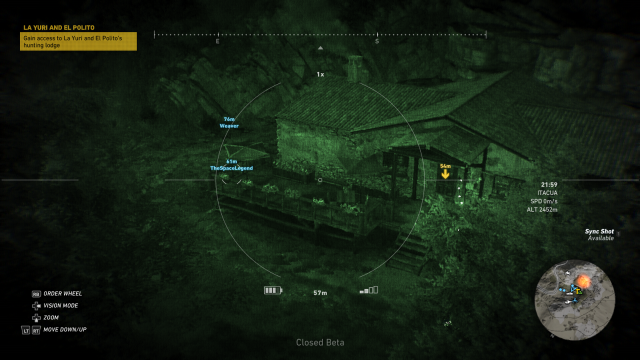 Matches with my own opinion of the beta pretty closely.

Sounds pretty interesting. Kinda want it, but also kinda don't want to pay the ripoff PSN price for it.

Just complaining about PSN UK's prices being significantly higher than the prices of a physical copy, as I often do. It's about a £13 difference, which is totally not cool in my view.