The third-person shooter from Microsoft Studios and The Coalition - Gears of War 4 - sold 617,107 units first week at retail according to our estimates. First week sales can be viewed on the VGChartz Global Weekly Chart for the week ending October 15. 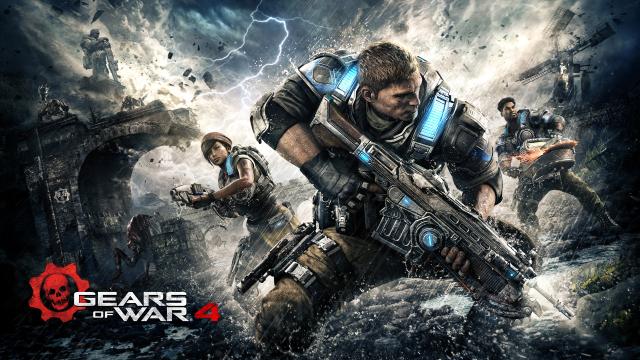 Here is how Gears of War 4' first week sales compare to other games in the franchise:

So I just realized that this game is an almost perfect comparison to Gears 2. They both came out at around the same point in their respective consoles life cycles, and their user bases are less than 1.5 million units apart (in the Xbox Ones favor).

what happened to actual console exclusivity? Microsoft should have stuck to the basic rule while promoting the console brand. This is the price.

Not great, but with digital I'm sure it could be over a million. 4 million lifetime is my guess.

yeah, that's about what I'm thinking aswell. Actually, my gut is saying just under. 3.7 or 3.8 million. But who knows.

I had already figured about 4 million. But you look at gears ultimate and it opened with a few hundred thousand and has had amazing legs.

@danno_omen There was also a really long time where you pretty much couldn't buy an Xbox One without getting Gears Ultimate.

@Normchacho that is very true however do you not think that going forward that will be the case with Gears 4? Once we get through the holiday season and all the holiday bundles are gone I'm sure Microsoft will stick with just a gears 4 bundle.

@danno That's possible, but I also thought they would do that with Halo 5. They may leave Gears out of the bundles in favor of another spring game.

I don't know if they have a big enough game in the spring. I mean if Sea Of Thieves or Halo Wars 2 does come out this spring I'm sure they will bundle it but it wont be a long running bundle sort of like Quantum Break when it was released. I think either way Gears 4 should have some pretty good legs I would think.

The game also sold 20,776 units in Japan (5%)
umm... how? It didnt even release in Japan. The only way you can get it here is to import it from America, which should really count for American sales rather than Japanese and its unlikely that many people have imported it anyway.

We can buy GoW4 at amazon japan, and include japanese sub.

I know, but it`s a US imported version so should count as US rather than Japanese sales.

Didn't even beat Judgment? Was there something bad about the game, or did the new cast just not appeal to players?

It didn't perform critically as well as previous Gears games (excluding judgement) and it's running into the Halo problem. It's a new studio making a game from a now old and maybe a little tired franchise. Commercially, the best days for Gears are likely behind it.

Judgement came out before digital sales was as significant. Especially in a world where your X1 games also work on PC. So in physical and digital, safe to presume it crushed Judgment. Lifetime sales will also be better for Gears 4.

@Mr Puggsly Yeah it will beat Judgement by a lot. I never realized it before but Judgement died after it launched. Nearly half of it's lifetime sales came in the first week it was on sale.

P.S. and not to bring up old wounds, but GOW:A did end up outselling it. So I guess...it wins the battle of least worst selling, disappointing game?

This game sold 20k in Japan?! Really? That's impressive. Is that a typo cause on the GoW4 page it lists Japan as zero.

Japan should be zero. It never actually released here, only imported versions are available.

@Ka-pi96 Really? Because that would be amazing.

Yep, really. Checked a couple of stores online and Yodobashi dont stock it at all while Amazon have an American import version which says you need a US Xbox One to be able to play it (although I thought Xbox One was region free?). Theres also news articles saying it`s not releasing in Japan due to the need for too much censorship (ironic given that Japanese games are often censored for western releases :P) https://techraptor.net/content/its-not-possible-to-release-gears-of-war-4-in-japan-heres-why

Yep, really. Checked a couple places online and the only place I saw that even stocked it was Amazon who only had an American import version (which apparently needs a US Xbox One to be played?).

Supposedly it never released due to needing to much censorship or something, kind of ironic considering Japanese games are often censored for western release :P

That's great! Somebody should probably fix that!

I live in japan.  I can only bought usa version in amazon. My thoughts,horde is too long ! but fun.

I bought it digitally. My sale isn't counted here and that's a shame. Its a great game and future sequels should be off on the right foot thanks to this game. The Gears franchise is in the right hands.

The only Gears of war that beat this game was Gears of war 2 and Gears of war 3. Gears judgement got beat because of digital sales. So not too bad. BF1 and COD took away a lot of the momentum. Microsoft should've released this game at the beginning of the year and away from the competition like Gears of war 3.

Well, since this is a Play Anywhere title and is therefore also available on PC, it's safe to say that digital sales exceed the usual 30% on consoles, but by how much? We simply won't know until MS/The Coaltion give us official numbers. If I had to guess I'd say digital accounted for roughly 50% of the sales, which comes out to over 900k, which is still down compared to Gears 2 and Gears 3, but higher than Gears 1.

No, thats not how it works. Games on Windows sell like shit. I am highly doubtful that digital made a huge impact on this one. Maybe add or take 50k from the total, but even so, this game under performed, no other way to put it.

You think the digital take nearly doubled because of Play Anywhere? That seems way too high. I can't imagine Play Anywhere accounting for more than a 5% bump in digital sales.

So if we assume Gears would have a slightly higher than average digital take rate anyways just because I expect digital sales to increase as time goes on and it is a Play Anywhere title, I imagine it's at like 35-40%. But likely not more.

30% digital means about 1 million first week on Xbox One alone.

Yeah there's no way digital was that high. 40% max. And that's being very generous.

The usual 30%? Since when have digital sales usually been around 30% on console? I thought it was usually around 10%?

@Ka-pi Digital on console has been going up for awhile now, it hasn't been at 10% since last gen afaik. EA recently said that digital console sales for them were 24% this past financial year, and they said they're a few points behind other publishers due to FIFA, which is popular in many countries where buying digitally isn't easy. And they said they're expecting to see 30% by the end of 2016. http://gamingbolt.com/ps4-xbox-one-digital-sales-make-up-29-percent-of-all-ea-games

Wait! After doing some digging Ka-pi has a point. EA said that total PS4 and Xbox One sales should be around 30% digital by the end of 2016. There are tons of games that are digital only or are heavily digital skewed. AAA retail games probably aren't anywhere near 30% digital.

@Norm Nah, EA were talking about their own sales, and they've only released 1 digital only game on XB1 and PS4 this year, Unravel. Unravel alone couldn't have skewed the figure by more than a few percent, and EA specifically said that they believed digital sales on console were higher for other publishers because FIFA is their most popular franchise and FIFA is popular in countries where buying digitally isn't practical or easy.

@Shika EA did bring up their own sales, but they were talking industry wide.
“We think the industry is going to probably [be], by calendar year end, around 30 percent. And our internal estimates are around 29 percent for ourselves,”

In the west 20% is usually considered the minimum.

Well they said their figures for the previous fiscal year were 24%, so it does seem to be a fair bit higher than I thought.

I wonder how those digital sales add up though. It seems to me like digital sales are typically more popular than physical sales (which are usually retailer specific), except in the lead up to xmas of course. So it could be that first week and such digital sales aren`t all that close to 30% of physical but get there over time thanks to regular digital sales.

Brace yourselves! The "I bought it digital so that clearly means everyone else did!" kids are coming!

Congratulations MS. You fucked up big time. Same goes for Coalition. Pathetic new cast, weak story, bland environments, abysmal reveal, marketing and presentation. The MP is great, however long that may last. Without bundles, this now niche series will have zero legs and will struggle to sell past 1.5 million retail.

I respectfully disagree with all of that, especially sales. It may not see the highs of Gears 1-3, but 1.5m, at most, physical? Way too low.

I think legs will be better than you predict. Holidays will help this game as well.