If you're not aware of Ninja Usagimaru: The Mysterious Karakuri Castle that's perfectly understandable. With a mouthful of a name and largely untrumpeted on Nintendo's eShop, who could blame anyone for glossing over this puzzle platformer from Arc System Works and Aksys? Sleeping on Usagimaru would be a mistake, however, especially for fans of the genre. Anyone who has fond memories of classics like Solomon's Key and Catrap, or modern puzzlers like Pushmo, will most likely enjoy this title. 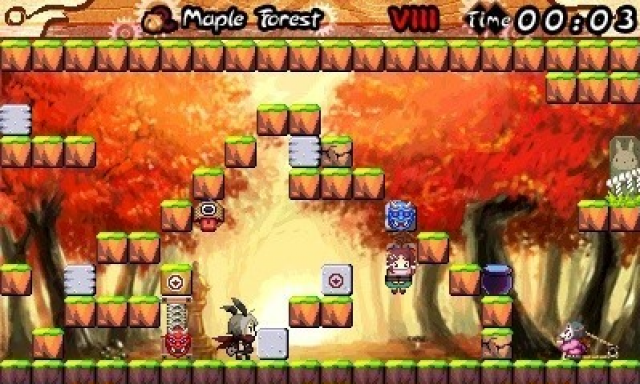 Ninja Usagimaru has a story of sorts that links the game's 60+ puzzles together, but it's a bit underdeveloped. Players control the wandering ninja Usagimaru who, with the help of the goddess Toyoukebime, rescues captured villagers and uncovers a nefarious plot — all set against some beautiful Japanese-inspired backdrops.

The game features six levels, each of which includes 10 stages. For the lucky few who can master all 60 brain-teasers, 10 bonus stages are unlocked. Although different in layout, most stages feature the same basic mission type: rescue a stranded villager or move a special block into the correct position. By pulling, throwing, and breaking blocks, and by operating levers and gear boxes, Usagimaru solves each puzzle. 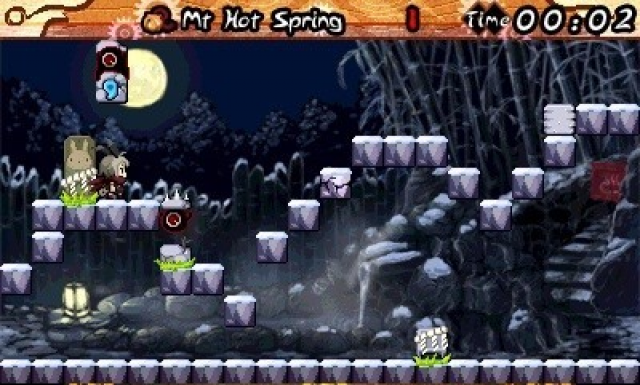 Puzzle platformers can be unforgivingly difficult, especially those that, like Usagimaru, revolve around trial and error. Thankfully the developers at Arc System Works added several features to the game that relieve much of the frustration typically associated with the genre. First is a series of training missions that familiarize players with the mechanics and tools of the game. Second is a series of helpful hints from Usagimaru's divine companion on the bottom screen of the 3DS.

Third, and most refreshing, is the game's checkpoint system. By placing a pinwheel in a given stage, players can warp back to a moment in time before they made a colossal blunder. This system allows players to move through each stage in pieces, instead of replaying it from the very beginning every time trial turns to error.

While these features make Usagimaru more forgiving, they do not make the game easy. Some of the late-game puzzles are terrifically challenging, as players need to move every block in the proper order, often thinking seven moves in advance. So while the game could be beaten in a few hours by a supercomputer, the rest of the gaming population with need double, triple, or even quadruple that amount of time. 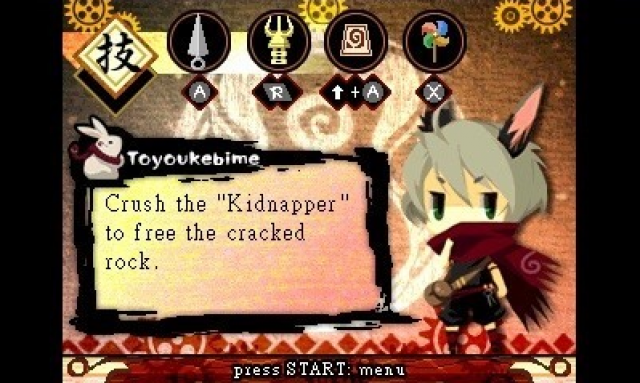 Many of the puzzles are dastardly, but they're also ingenious. Even when a particularly brain-melting puzzle sends you into a cursing fit it will also inspire respect. The development team at Arc System Works did a commendable job dreaming up creative way to test its fans. At the same time, many of the puzzles, having similar themes and goals, tend to blur together.

Ninja Usagimaru is the definition of a sleeper: low price, niche genre, little to no fanfare. Well, consider this your wake up call. Fans of puzzle platformers will find in Usagimaru a hidden gem with a healthy amount of content and some truly devilish puzzles. The graphics are humble and the story undercooked, but in terms of puzzle design and art direction, Usagimaru is a clear winner.

This review is based on a digital copy of Ninja Usagimaru: The Mysterious Karakuri Castle for the 3DS, provided by the publisher.