It's an exciting time to be a Resident Evil fan. Between the surprise announcement of Resident Evil VII a couple of weeks ago, the Revelation series, and all of the HD re-releases, there's plenty of Resident Evil to go around. The mainline series seems to be going back to its horror roots, but Capcom hasn't forgotten about those who like the action-heavy titles and has now released a team-based competitive shooter in the form of Resident Evil: Umbrella Corps. It comes as no surprise that Capcom hopes to jump into the competitive shooter scene given how the Street Fighter community has grown in recent years, it's just too bad the Umbrella Corps needs a lot of work. 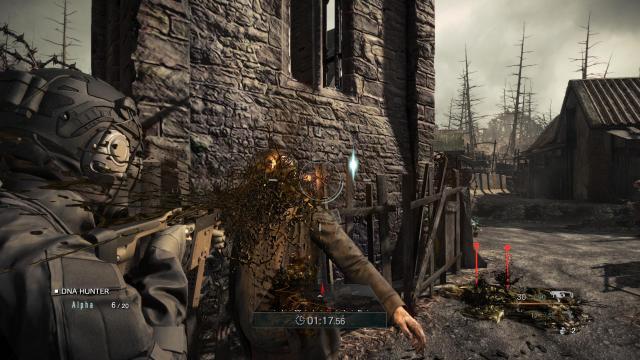 Narrative isn't always a focus for competitive shooters, and Umbrella Corps is really no different, but there is some semblance of a plot given that it fits into the Resident Evil universe. Set two years have Resident Evil 6, corporations similar to Umbrella with biotechnology divisions dedicated to recreating the T-Virus have discovered locations filled with Umbrella secrets and research. As a mercenary in service to one of these corporations, it's your job to explore the zombie infested sites and collect valuable DNA samples and other artifacts while fighting off rival mercenaries.

Though obviously not quite grandiose as other Resident Evil games, the plot works well enough and is fully explored in the game's short single player campaign, called The Experiment, and even hints at a possible return of a long-time series character. The narrative is a nice addition to the Resident Evil lore, albeit a minor one. 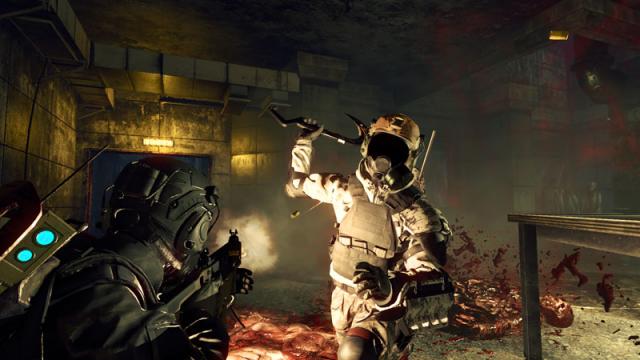 Like previous games in the series, Umbrella Corps is a third person shooter, but utilizes a more tactical approach with its competitive 3v3 setup. One thing that's really noticeable right from the beginning is how close the camera is zoomed in over the shoulder, almost as if you were standing cheek to cheek with your merc. It definitely adds to the game's intensity and feels more first-person like, since you won't be able to see behind you like you can in other third person games. It takes some getting used to and even then still feels slightly odd since the button placement to quickly snap around is not optimal.

Once you've gotten used to the controls, you'll realize that gameplay is pretty standard third person shooter action, though there are a couple of additions. Weaponry ranges the typical modern shooter repertoire, including many different types of guns and explosives which are unlocked as you progress your rank through multiplayer matches. More XP can be gained for more advanced or flashier kills, like lunging with an axe or using zombies to help in the carnage. 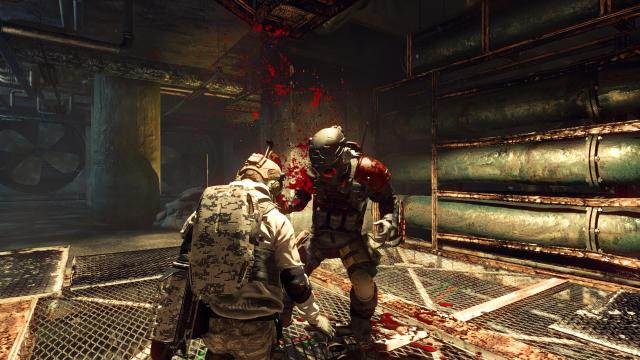 Rather than just a typical knife for a melee weapon, each mercenary is equipped with a climber's axe that's been modified to allow for powerful, one-hit-kill lunge attacks, as well as being able to scale most walls. Running around like a madman hacking zombies and mercenaries alike is a lot of fun, but not so much when the whole team does it and you get dropped like flies. Matters are made worse by the fact its hitbox is very broken and can be taken complete advantage of (characters will stutter and lag if targeted by someone's axe).

Another interesting piece of equipment is the zombie jammer that every merc gets. The jammer keeps zombies from noticing you unless you actively attack them. Once your jammer gets destroyed, however, mayhem sets in and you become the prime target for every infected in the area. This is the only real tactical aspect of the game, as you'll have to make sure to keep your jammer in-tact during a firefight. If it does get destroyed and you're lucky enough, you can loot one off a dead merc.

Besides that, the action is too fast and becomes too chaotic for much in the way of strategy, especially with everyone exploiting the axe lunge. While the axe is devastatingly entertaining and the jammer and attacking zombies give the game an interesting spin, Umbrella Corps’ gameplay quickly becomes stale as it struggles to break the mould. 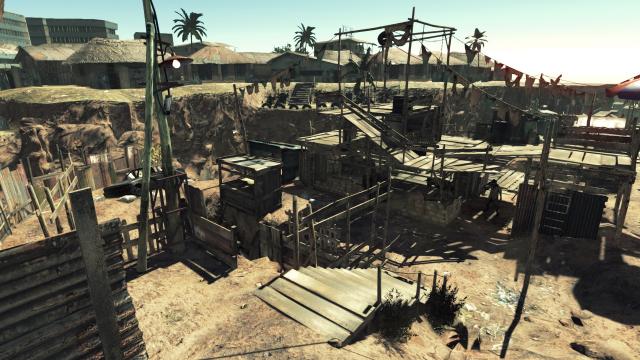 Three modes are available as of right now, one being single player (The Experiment), and the others being the two kinds of multiplayer matches. The Experiment is essentially a way to get the player acquainted with how mission objectives work and generally is practice for multiplayer. The two multiplayer modes are where most of your time will be spent, one being single life death match and the other being objective based with respawns.

Both modes are played on the same maps, which include many famous Resident Evil locales, like Raccoon City and one of the Antarctic bases. They're a bit on the small side, even for a 3v3 shooter, but they are designed well with many different avenues to exploit, so you can climb house walls to reach rooftops or use grates to crawl under the floorboards. Yet, even with a good number of creatively designed levels and maneuverability options, it's hard to look past the wholly mediocre gameplay and miniscule amount of modes. It also doesn't help that the community is already small and dwindling, so it takes a bit longer than you'd like to find a match. 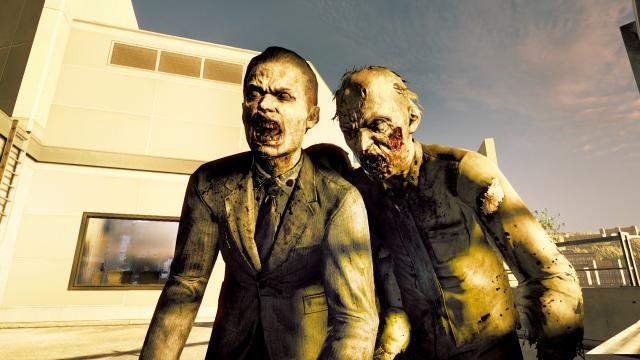 Different from other Resident Evil games, Umbrella Corps is not the prettiest and has plenty of rough edges. Where the levels look great, characters and zombies, especially the dogs, look a bit jagged. Even the special zombies that pop up during objective play aren't quite up to snuff, and some of the masks that let you look like characters from the series have creepy thousand mile death stares. When characters are killed by an axe, it passes through polygons like the N64 days. All told, it's by no means up to par with any of the recent Resident Evils. Even though there is minimal voice acting, it's just as hammy as every other game in the series, and I wouldn't expect (or want) any less. It certainly fits the bill of a budget title.

Capcom is trying to keep all of its Resident Evil fans happy. Those that clamored for years for more survival horror seem to be getting their wish with Resident Evil 7. Others who may actually like the more action oriented style of play the series has adopted in recent years are unfortunately forced to hop into Umbrella Corps. The makings for a fun game are there, it just needs a lot more work before it gets there.

I'll just wait and hope it'll be free on PS+ down the road. As much as I love the RE games, I can't see myself buying this. Operation Raccoon seems way more fun if you play with coop. Just give us RE Outbreak 3 or an Outbreak remake instead.

Seems like a fair review, I didn't expect much from this game and the reviews have been pretty bad, at least here we do get a bit of a view on what does work, but it seems like I will pass on this, Resident evil 7 will be the big one for me, if I can get my hands on a VR headset

I have a bundle pre-ordered. But i'm not sure if i'm gonna keep the pre-order or not. I want it, but $500 is alot to dish out all at once.

Not even going to waste my time or money on it. This is not a Resident Evil game, imo.

With the way things changed from RE4-6, the RE7 demo, and now this. I don't even think Capcom knows what a Resident Evil game is anymore xD