Nintendo has announced a price cut for the Nintendo 2DS, starting 20th May. The Nintendo 2DS will now retail at a suggested price of $79.99, which represents a $20 reduction. The handheld will also come pre-installed with Mario Kart 7. 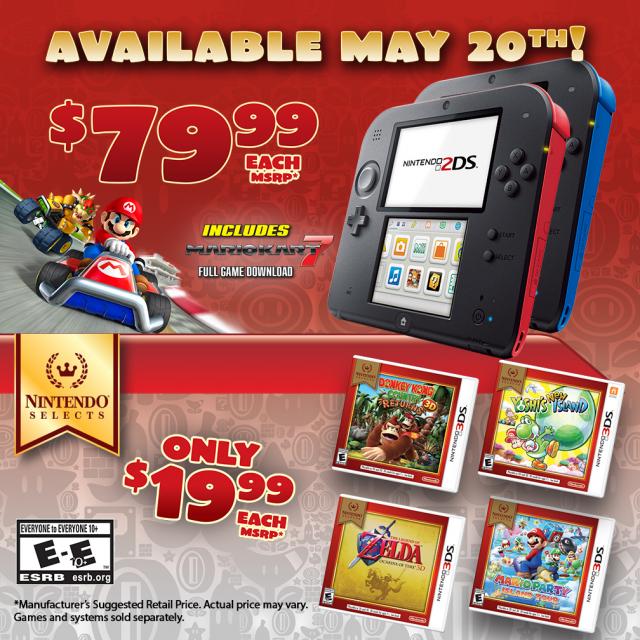 Hope that means we will get a discount on the 3DS too.

if you dont own one and dont need the 3d or a generally just faster console in the "new" lineup, this is nice to play pokemon and stuff with, some really good games on the 2ds/3ds

My daughter is learning how to read. By Christmas 2016, she be ready for a brand new Nintendo 2DS.

Wow, that is an amazing price for a console with Mario Kart 7 on it, how big is the SD card preinstalled in these I wonder? for that price it can't be too big surely? I'm not a huge fan of the design of the 2ds but still, that price makes the system in the region of $50 when you factor in the free game.

I think the target audience for the 2DS won't need a huge SD Card storage.

So glad I kicked my Nintendo habit. The WiiU soured me off N hopefully forever.

You know, it is almost impossible to believe that the same company that has done so much right with the 3DS - marketing, price management, etc - has done so much wrong with the Wii U - no cohesive marketing message, no consistent push, failing to market or bundle at key periods, and the thing is still 300 freaking dollars. It's astounding. And what's more astounding is how Nintendo seems to marvel at their failings with the Wii U when the answers for what they are doing wrong are to be found WITHIN THEIR OWN COMPANY.

was able to get $80 price during black friday like 2 years ago, but it's nice they are lowering the price for everyone and this includes MK7

The 2DS would sell even better if it adopted a clam shell design but this is a good start. The technology must be getting really cheap.

Had the 2DS before I upgraded to New 3DS XL. Though I prefer N3DS vastly and play 3DS games more often since having it, 2DS is a great value.

Wait. People were buying the 2DS? I kind of thought it was a joke.

Nah its real. You probably missed the Pokemon coloured 2DS! Which had Blue, Red and Green and Yellow!

I've seen it out in the wild.