The Rise and Fall of Halo, Part I: Combat Evolved - Article

For 15 years Halo has captured the imagination of gamers. The series' first game, Halo: Combat Evolved, made Xbox a household name and inspired a generation of console first-person shooters. Its sequel, Halo 2, introduced innovative matchmaking technology that encouraged subscriptions to Xbox LIVE and popularized online multiplayer on home consoles. The third game in the original trilogy, Halo 3, built off the popularity of the Halo brand, shifting 14.5 million units in total.

From 2001 to 2010, Xbox owners enjoyed six Halo games: five first-person shooters developed by series creator Bungie and one real-time strategy game developed by Ensemble Studios. In 2010, Bungie, who for almost a decade had shepherded Xbox's "killer app" announced it had entered into a publishing partnership with Activision. Based on a previous agreement, Microsoft retained the rights to the Halo franchise. 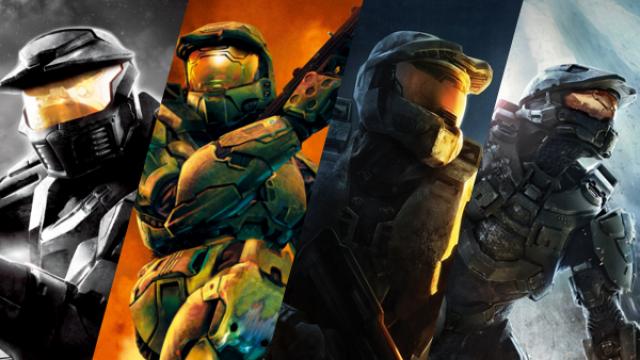 In 2012, Microsoft released Halo 4, the first game in a new Halo trilogy, developed by 343 industries, which Microsoft had established in 2009 to manage the Halo universe. Two years later, in 2014, 343 released The Master Chief Collection, a compilation that includes Halo, Halo 2, Halo 3, and Halo 4. And, just last year, 343 launched Halo 5: Guardians.

Setting aside the RTS game Halo Wars, the Halo series can be neatly divided into two main eras: the Bungie era from 2001-2010, and the 343 era from 2012-present. Put plainly, the Bungie era was great and the 343 era, as it stands now, is pedestrian. How and why Halo rose to become the industry's premier console first-person shooter only to fall precipitously starting in 2012 is the subject of this article. It will explore what Halo did right and what it did wrong in the years between 2001 and 2010, and how 343 accelerated a slow decline under Bungie. 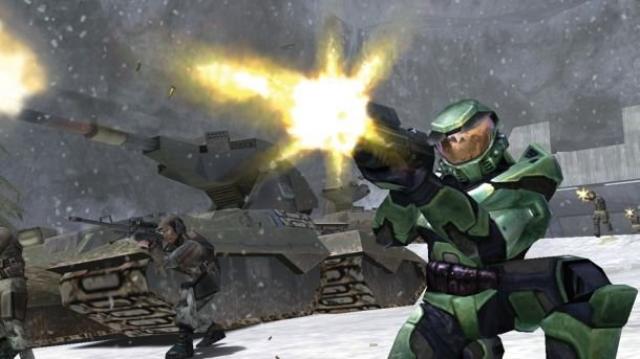 Everything started in 2001 with Halo: Combat Evolved, a masterpiece of game design and quite unlike any other first-person shooter that had come before. While TimeSplitters was riffing off the GoldenEye/Perfect Dark formula and Red Faction was experimenting with destructible environments, Halo was rewriting the rules of first-person action.

Bungie may have hated the subtitle Microsoft foisted on the studio, but "combat evolved" is surprisingly accurate. The mechanics, themes, and multiplayer options introduced in Halo: Combat Evolved, and later codified in Halo 2, set the playbook for 21st century shooters. 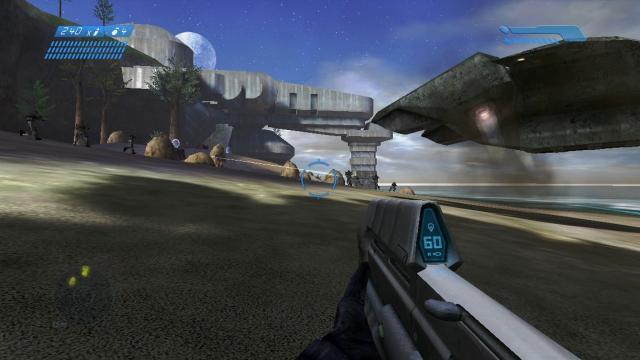 By departing from traditional FPS conventions, Halo: Combat Evolved blazed a new trail for console shooters. The game introduced a regenerating shield mechanic that was further refined in Halo 2, mitigating the need for health pick-ups. Halo also limited players to only two weapons at once, a far cry from the huge, unlimited arsenals in traditional shooters. In addition, Bungie created a combat system where players could perform a melee attack or toss a grenade without holstering their firearm. The studio also inserted vehicular combat into the mix. 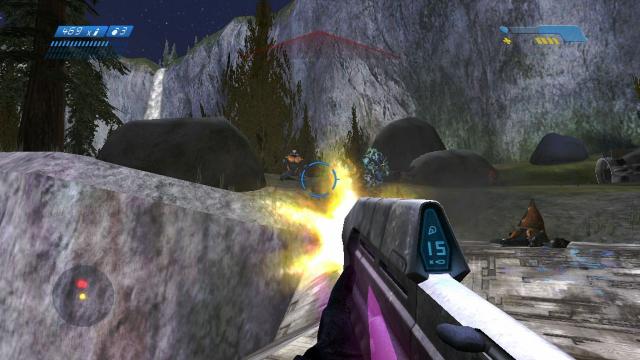 Now, Halo didn't invent any of these mechanics. Shooters like Rainbox Six, Rise of the Triad, Faceball 2000, Starsiege: Tribes, Team Fortress, and Perfect Dark had already tested the waters before Halo arrived on the scene. However, no shooter before Halo synthesized all these elements into a complete package, flavored it with a sweeping musical score, buttressed it with 16-player multiplayer options (via LAN), and wrapped it all in an epic science fiction storyline.

The results were immediate. Halo made Microsoft, a newcomer to the console arena, a legitimate contender. It quickly became Microsoft's flagship franchise, and Master Chief — the game's hero — became the face of the fledgling Xbox. By April 2002, five months after Halo's North American launch, a million copies of the game had been sold. 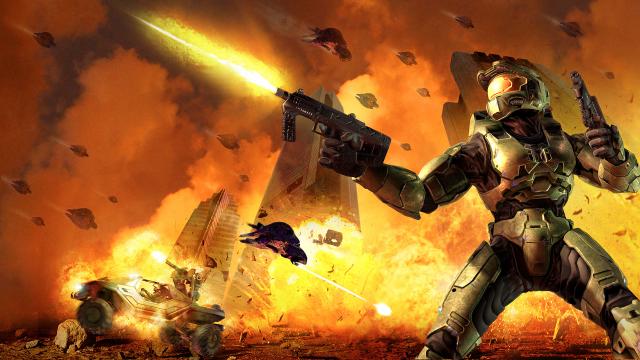 Although Bungie hadn't conceived Halo as a multi-part saga, the critical and commercial success of the game demanded a sequel. So Bungie regrouped and focused on some story and gameplay ideas that it couldn't fit into the first game. "Your initial goals with a sequel are always the same," said Jaime Griesemer, design lead on Halo 2, "to finish all the stuff you had to cut from the first game. And we had to cut a lot from Halo 1, so we had a lot of ideas we were ready to move on."

Despite its best intentions, Bungie mismanaged the development cycle of Halo 2, leading to a product many at the company found disappointing. At E3 2003 Microsoft presented a flashy demo of Halo 2, showing Master Chief flying into a futuristic Earth city, New Mombasa. Featuring dual weapon wielding and vehicle hijacking, two novelties in Halo 2, the demo wowed the audience assembled in Los Angeles. But it was all smoke and mirrors. The graphics engine used at E3 was scrapped entirely. Huge sections of New Mombasa were cut. 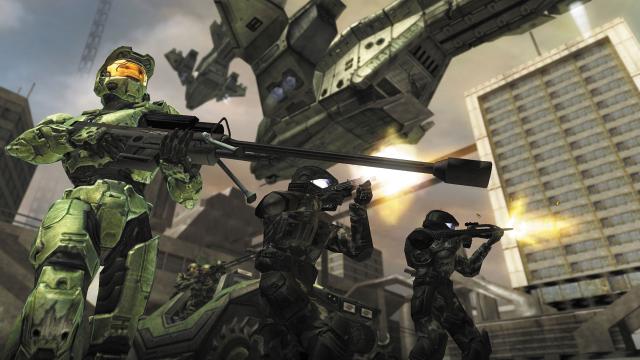 Bungie decided to rewrite the tech behind Halo 2, leaving design and art teams without the ability to test assets for over a year. The result was a mad dash to the finish line during the final year of production, which prompted Bungie to discard a planned multiplayer mode and settle for a cliffhanger ending.

"If you look at our original plan for Halo 2's single-player campaign and the story we were going to tell," said Griesemer, "this basically adds up to Halo 2 and Halo 3 combined. We didn't trim that back nearly enough and ended up having to force it, and that's why you got the ending you did." 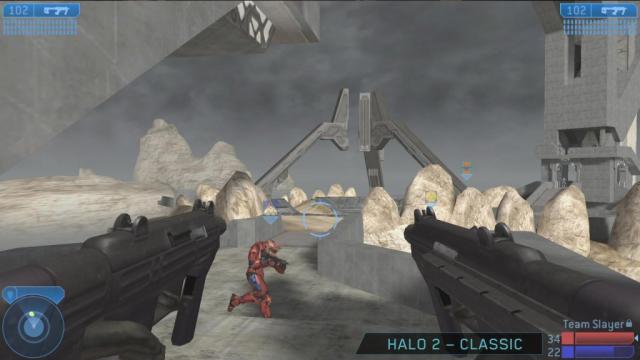 It's a miracle then that, despite the development hell that almost overwhelmed Bungie between 2002 and 2004, Halo 2 emerged as such a brilliant game. The campaign, which delves deeper into the Halo mythology and allows players to control both Master Chief and a disgraced member of the enemy Covenant is outstanding, cliffhanger ending notwithstanding.

Halo 2 multiplayer proved to be, arguably, even more impressive. Its innovative matchmaking system ensured Microsoft's experiment with online gaming was a success and, as a result, it changed forever the landscape of online multiplayer on home consoles. 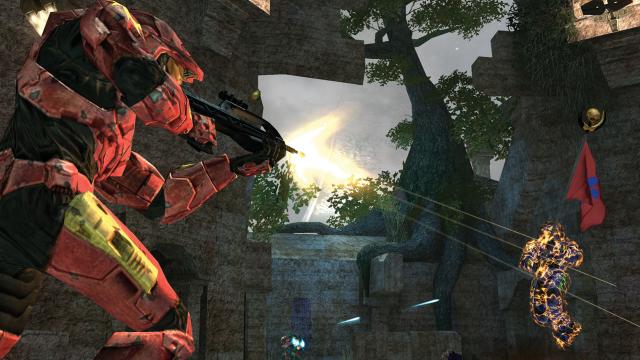 However, Bungie's commitment to multiplayer came at a price: a slightly inferior single-player campaign. Unfortunately, this would become a trend as Halo moved from the original Xbox to its successor, the Xbox 360. As multiplayer options evolved and expanded over the years, the series' single player campaigns for the most part declined.

hmm, I dont really agree that Halo 2 had an inferior campaign (or that it became a trend from then). Id say both 2 and 3 were far superior to the original in terms of campaign.

I agree with you. I've never understood why some people like Halo 1's campaign more than 2, 3, or even 4 (liking 1 more than 5 I can understand xD). Maybe it's because I played Halo 2 first, but I was never able to get into Halo: CE, the gameplay mechanics always felt so inferior compared to 2 that I never even finished it until MCC released, and even after finishing it I still think it has the 2nd worst campaign after Halo 5.

Halo Combat Evolved, still to this moment, has the best gameplay and levels for single player co-op.

Still my pick for best FPS ever. The open levels, the improvisational gunplay, the cutthroat AI -- it all combined for a one-of-a-kind experience.

One thing though, while Halo was an amazing single player experience if it wasn't for the launch of Halo 2 alongside the Xbox live starter packs with the original Xbox then console online networks would all be around the levels of the Wii/Wii-U today still without that massive surge into online and an online marketplace.