I’m really not sure what I expected when I came across Manual Samuel, but when I first sat down to put it through its paces I certainly didn't expect to be presented with a game that would consistently make me laugh and smile throughout. But that is, of course, exactly what happened.

The game begins with a lovely narrator who introduces us to the first scene, which takes place in seemingly ordinary house. We happen across Samuel, who’s weirdly laid out on the floor and turning blue. A hipster version of Death soon arrives to claim his soul but first he makes our protagonist an offer: Samuel will no longer be able to automatically function (i.e. everything is done manually, from breathing, to blinking, to moving), but if he’s able to survive 24 hours in this state then Death will not take his soul. 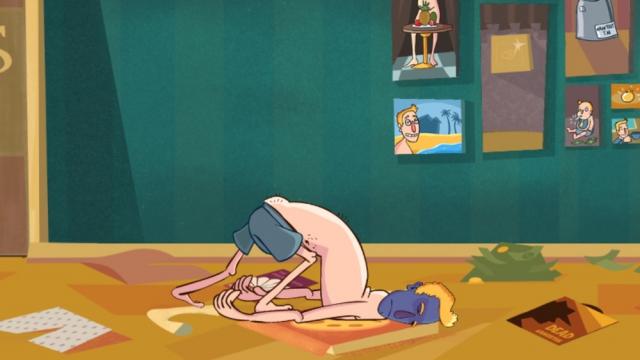 It's whilst Death is explaining this deal that Manual Samuel’s core gameplay challenge becomes apparent, because Samuel is running out of breath on the floor and it's up to you, the player, to make sure Samuel stays alive by performing his ordinarily routine and automatic bodily functions. Holding X makes Samuel inhale and B makes him exhale. Eventually, you’ll start to notice the screen going white and Samuels eyes going red; that’s because you need to press A to blink occasionally.

The basics understood you then need to go about your day, and it's here that Manual Samuel truly starts to show off both its sense of humour and its level of challenge. Getting up, walking, breathing, and blinking, all whilst looking at everything in the scene and generally going about your daily life is really tough when you have to think about and perform every little action. Samuel's first venture is to the bathroom and as expected you need to manually control Samuel as he does this. 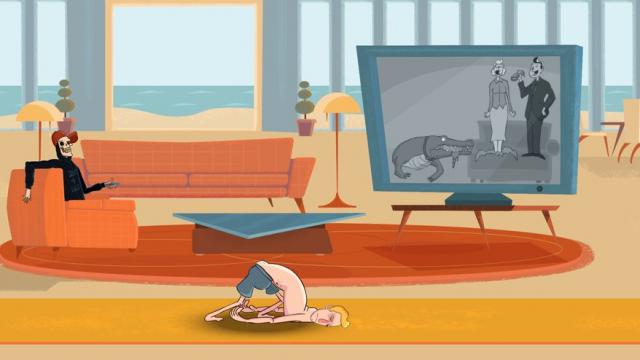 Once done peeing, you make your way to the shower, where (whilst still manually blinking, breathing, and walking) you must also control both of Samuel's arms in order to wash. It’s brilliantly difficult, and also pretty amusing when you mess up; seeing Samuel fall over or fail to do something properly not only results in funny animations playing out but the narrator will also humorously castigate you.

From here you get dressed and eat breakfast. I was advised by the developers that actions you perform throughout the house will have consequences further down the line. In one example the developer told me that you could ignore the coffee at breakfast, which may cause Samuel to become tired and therefore harder to control later on in the game. 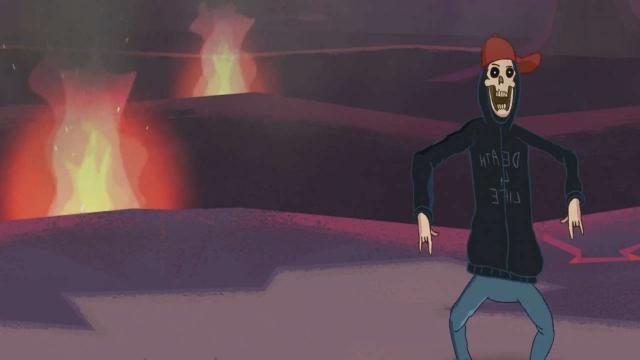 The art on show is fantastically fitting. The game itself is not particularly impressive graphically but the comic/cartoon style really suits the game's sense of humour. The characters are also great, with Death being particularly stand-out. Suffice to say, once the demo was over I wanted to see and play more.

I was told by the developers that Samuel finds himself in all manner of crazy situations over the course of the game's campaign, from driving a car to eventually controlling a robot suit with Death parroting on your shoulder. It sounds great and I can only begin to imagine how difficult it’s going to be to manually control Samuel throughout all of this. 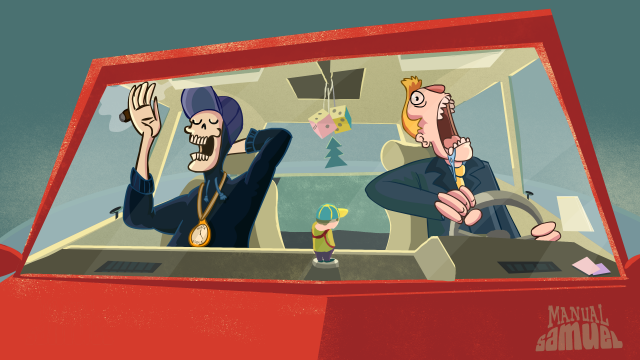 I’ve seen many refer to Manual Samuel as QWOP crossed with Monkey Island, and I couldn’t agree more. It’s both funny and challenging, which makes for an oddly brilliant combination.

Manual Samuel is set to release this summer for Xbox One, PC, and PS4.