Rise of the Tomb Raider (Xbox One) - Review

Coming two years after the Tomb Raider reboot that made the series more relevant and more palatable for modern audiences, Rise of the Tomb Raider could have easily fallen into a sophomore slump. Instead, the developers at Crystal Dynamics have learned from the ambitious but uneven last outing's mistakes and produced a game that's more balanced and focused. Despite some improvements, however, Rise of the Tomb Raider, like its predecessor, suffers from an identity crisis.

This latest in the adventures of the globe-trotting, tomb-raiding Lara Croft has our heroine searching for the "Divine Source", a mystical object rumored to grant immortality. Her father, also an archaeologist, searched his whole life - and ruined his career - for the Source. Now Lara, determined to clear her late father's name, heads to Syria to unravel a mystery one thousand years in the making. 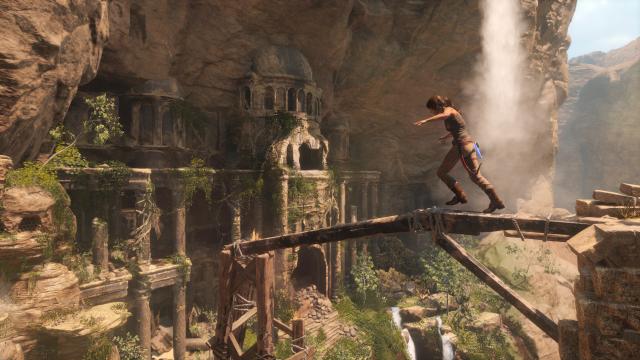 Gone is the deep narrative focus in the last title on Lara's transformation from a vulnerable and naive academic into a strong and resourceful survivor. While some may lament the replacement of that narrative device with what amounts to obsessive daddy issues, it was a step in the right direction for Crystal Dynamics. Lara's personal struggle in the reboot was incongruent with the violence of the gameplay.

Speaking of gameplay, in Rise of the Tomb Raider it's a mix of action and adventure elements derivative of the 2013 game, and Uncharted before it. However, in this sequel the gameplay - a potpourri of third-person shooting, scripted platforming, and light puzzle-solving - is much more carefully balanced and blended. There's a greater emphasis on exploration and stealth action, and a movement away from quick-time events. There's also a new on-the-fly crafting system inspired by The Last of Us. 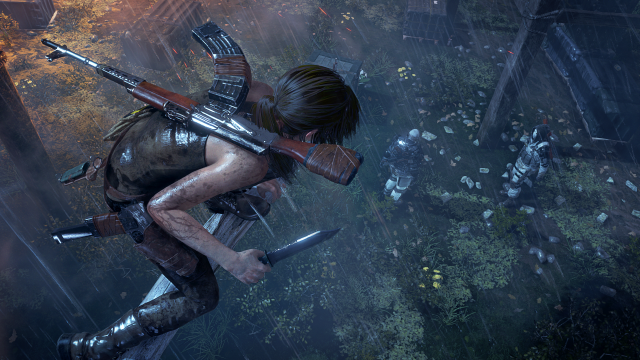 It's when Lara observes her title as tomb raider that the game is at its best, however. Rise of the Tomb Raider features nine optional challenge tombs, all of them carefully constructed and mentally stimulating. This is another area where Crystal Dynamics learned an important lesson. Tombs and puzzles are more plentiful, more elaborate, and more deliberately woven into the game world. Moreover, they yield more desirable rewards. In the previous game, tombs awarded experience points and maps; in Rise of the Tomb Raider, they award skills.

When Lara isn't stalking prey, performing death-defying stunts, and exploring ancient tombs, she's free to wander around several hub areas in the game, replete with all the hallmarks of an open-world game: side missions, hidden treasure, audio logs, and challenges (for example, 'cut down six Soviet flags'). Everything earns Lara experience points and crafting items, which can be used to upgrade her skill trees, weapons, and ammo pouches. Collecting items is more satisfying and less bewildering than in the 2013 reboot, but it's not without a certain amount of tedium. 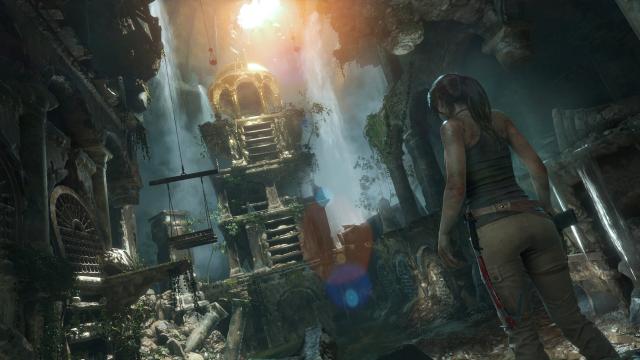 Crystal Dynamics manages to weave these open-ended exploration and harvesting segments with linear action sequences in a surprisingly seamless way, but they point to a larger problem with Rise of the Tomb Raider, and the rebooted series in general.

Rise of the Tomb Raider has a crisis of identity. It wants to be all things to all audiences: linear, scripted action platformer for Uncharted fans; a backtracking, action-adventure game for Zelda and Metroid fans; and an open-world role-playing game for fans of The Elder Scrolls and The Witcher. There's even a tacked-on, underdeveloped challenge mode called "Expeditions" that seems designed more for micro-transaction revenue than anything else. It all feels like a title designed by committee. 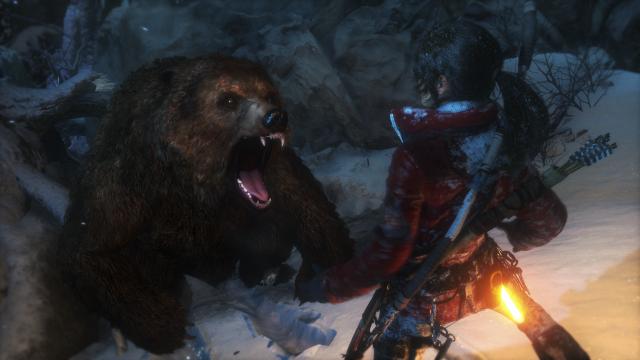 It's a testament to the skill and ingenuity of Crystal Dynamics that it manages to tie all these disparate elements into such a handsome and entertaining package. Rise of the Tomb Raider, in the end, is worth playing. But its lack of a singular identity keeps it from greatness.

Overall, Rise of the Tomb Raider is a step forward for the rebooted franchise. Gameplay is more carefully tuned and balanced; there are fewer quick-time events; and collecting items seems more organic and less overwhelming. While the final act bogs down in firefights, the game, for the most part, juggles physical and mental challenges successfully.

Awesome game, actually for me it's the game of the year, if you have an xbox one you should buy this.

I suggest anyone who has a Xbox One to pick up this game.

I'll definitely get it sometime for PS4.

Resource gathering is a problematic element of gaming, as it can get very tedious very quickly if implemented badly. I can't say anything about RoTR directly, but if it has a particular point of criticism in a review it's a bit of a worry. I hope Uncharted evolves by taking inspiration from what the Tomb raider reboot has done well and also what Naughty Dog did with TLOU. But I prefer Uncharted to have minimum to no RPG elements. XP is one thing I don't want turning up in Uncharted. But TR being its own thing can hopefully use resource and XP grinding well rather than being detracting from the experience. I actually thought TR 2013 was pretty balanced in this regard.
I wish tomb raiding was at the core of the game rather than being an optional challenge.

Amazing game! this, halo 5 and dying light are my pick of the year.

Fewer QTEs? I'm moderately interested after hearing that. I tried to play the first game twice but rage uninstalled both times because it was one QTE after another.

"Overall, Rise of the Tomb Raider is a step forward for the rebooted franchise."
Ouch, the majority of gamer who played the game agree with that but with the deal from microsoft and square fans really have to be scared for this franchise future :/

Hmm, you must mean, of whom you got 11 down votes from. Lol

TR doesn't belong to Sony though.