Heavy Rain was one of the previous generation's most impressive and unique titles.  It managed to inject real tension into a 'choose your own adventure' style game by allowing your characters to actually die without it bringing the story to a halt.  Picking the wrong path didn't result in a traditional fail state and a game over screen; instead the consequences of your decisions were played out.  Quantic Dream's subsequent title, Beyond: Two Souls, deviated from that design and, in my view, suffered because of it. 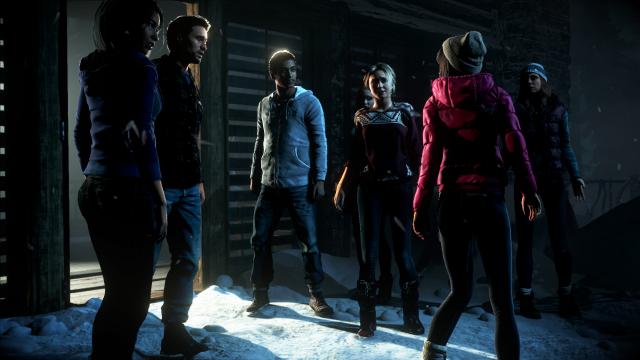 While Until Dawn is not made by Quantic Dream it's hard not to draw parallels with Heavy Rain regardless. It's a 'choose your own horror' title that features multiple playable characters attempting to survive through the night, with the player calling the shots and making the decisions (for better or worse).  Until Dawn isn't quite as impressive as Heavy Rain, but it's a fun ride and is easy to recommend to fans of this resurgent sub-genre.

Until Dawn’s narrative focusses on a group of friends who are relaxing in a mountain cabin/mansion when a tragic accident kills the two twins of the group.  A year on from these events the brother of the dead twins invites the group back up to the mountain to party and to try and forget their woes.  Anyone with half a brain can see that this is going to end poorly (who parties in order to remember the friends they lost when a prank went wrong at a previous party?), but if you're able to suspend your own disbelief the story becomes enjoyable to follow. 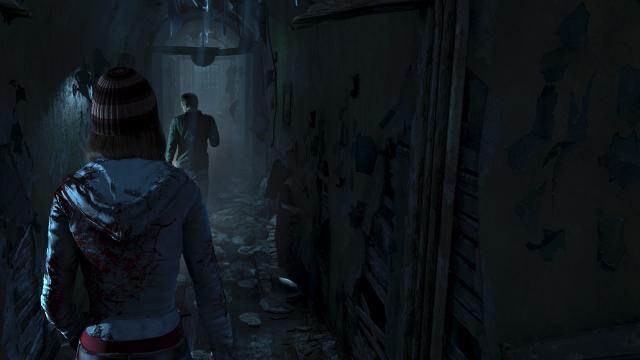 One of the strengths of Until Dawn is that you can actually avoid a lot of the standard horror tropes that so annoy viewers by making different calls.  Does one of your characters hear something in the distance and want to investigate by themselves?  Well you can dissuade them of that bright notion and steer them towards the safety of the group.  That said, a number of stupid decisions are central to the story and cannot be avoided regardless of the decisions you make, which is an unfortunate but necessary part of the game's design.

Mandatory dumb choices aside, Until Dawn offers up a fairly interesting story that twists and turns through about six and a half hours of playtime.  Things do start to get a little convoluted and silly after a while, but that's likely a by-product of needing to keep the story going for longer than, say, a traditional horror movie.

While you might imagine that a game with so many different player choices like this would be highly replayable, I felt that wasn't really the case here.  Certain revelations in the story give new meaning to the events you encounter, and so repeat playthroughs offer less tension and mystery.  It also opens up the story to greater scrutiny and plot holes become much more visible the second or third time around. 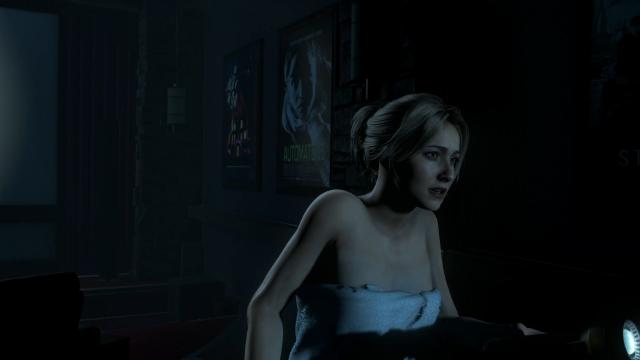 The most glaring problem with Until Dawn - and it's a fault shared with every title in the genre really -  is that developers only have so much time and so many resources to pour into branching narrative paths, and so there a lot of cases of 'funnelling', whereby seemingly meaningful choices actually have no real effect on the story.

To be clear, I understand that developers can only create so much content and that the convergence of paths is an unavoidable aspect of the genre, but once you start to spot this the illusion of choice is shattered somewhat.  For example you can quickly begin to spot which characters were expected to die at a certain point because after that they contribute little and resources have not been put into building up their presence.  One of Heavy Rain's greatest strengths, by contrast, was how well the illusion of meaningful choice was maintained on the fist playthrough, but I admit that I wasn't as tuned to these development tricks at the time.

Another weakness of Until Dawn vis-a-vis Heavy Rain is the lack of puzzle gameplay, which was an enjoyable part of the latter title.  On the other hand you're required to put some real thought into some of your decisions in Until Dawn, which is a definite plus.  This is the first time I've played through a game in this genre and felt like not making a choice was actually the best way to go some of the time. 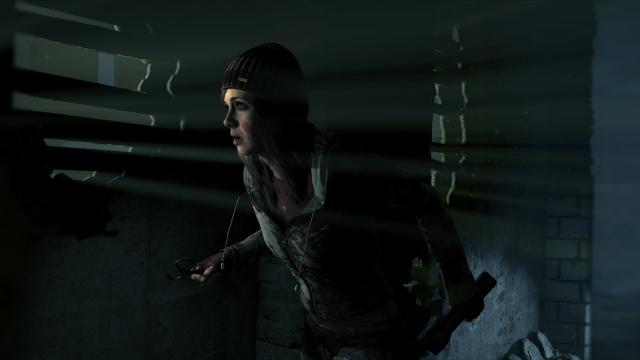 But where Until Dawn really shines is when you play it with a group of people all shouting out and debating what they think characters should do.  Even when playing it with just one other person I had more fun than I would’ve had by myself, so I definitely suggest making this a 'multiplayer' experience if you're able to.

Until Dawn also makes some of the best use of motion controls I’ve encountered in a game that largely uses a traditional control scheme.  At certain points you’ll be tasked with staying perfectly still and will be shown a light bar that indicates your movements.  These events are genuinely tense and I found myself holding my breath in order to keep my character safely hidden.  Other survival horror titles on consoles should take notice.

The presentation is strong as well.  Until Dawn boasts some breath-taking mountain vistas and great visuals, and while the characters can often be annoying, the voice acting is strong (I especially loved Peter Stormare's performance as Dr. Hill). 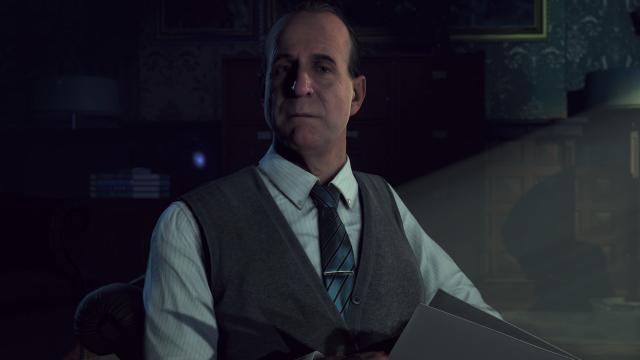 Until Dawn may sound expensive given that it only takes 6-7 hours to play through, but there are still so few titles in this genre with such high production values that it's actually an easy recommendation for fans of the genre.  The multi-character adventure style of gaming that was spearheaded by Heavy Rain is a perfect fit for the slasher/horror genre, and few games, or media experiences in general, are as intense.  It’s just unfortunate that multiple playthroughs can’t maintain that same level of intensity.

One thing I never understand about horror movies/games is why the hell you wouldn't just get the hell out of there the moment weird stuff starts happening. Find the front door, walk through it and never look back. Instead everyone has to go all master detective, to their inevitable demise.

That's actually the point of this game - to make the characters as silly and cliche as possible.

Exit is sabotaged in this game.

Dude, nothing bad would ever happen then XD

Not sure why lacking puzzles is a specific criticism. It doesn't strike me as a game that requires puzzles. Arguably making people stop and spend several minutes on figuring out a puzzle could ruin the pacing of this game. Not sure the guy trying to kill everyone is the sadistic genius type that would throw puzzles at his intended victims to screw with their heads even more.

I think mostly I would've liked to have something that felt like a challenge. QTEs were usually pretty basic (unlike Heavy Rain with their "hold these 3 buttons and press this one type QTEs) and I would have enjoyed a puzzle or two to break up the Choice, walk, Choice, walk, QTE gameplay. The motion control sectoins were a good start to something challenging, but I think it could use more.

Shit. You had me until "motion controls".

They're really not all bad. Mostly just have to hold the control still while you're hiding and stuff. Doesn't happen too much though.

How would puzzles fit in this game?

I've reedited the review for clarity, my apologies for the confusion.

Seems to have been an editing error. I did not mean that some characters are doomed, but that there are some scenes where characters have very little to do or say after a certain point where they were likely to die.

I'v e only gotten 3 endings thus far so I can't say there won't be plot holes, but the author's belief that some characters are doomed makes me question that statement. Exceptions being during the prologue and a spoiler.

That was an editing error, my apologies for the confusion but the section should be more accurate now. It's not that some characters are doomed, but that after certain events they have very little to do or say, probably because they had a high probability to be killed at that point and making the scenes after not include them much makes development easier.

Does the author imply that you can't save the whole cast? That's not the idea I got from most of the reviews.

You can definitely save the whole cast, it's one of the trophies.

Don't think I did implied that, you can definitely kill or save the entire cast.

Just completed it and its a great game. Really enjoyed it. Hope it does well enough for them to do another game in the same style.

Realy happy until dawn is a solid title