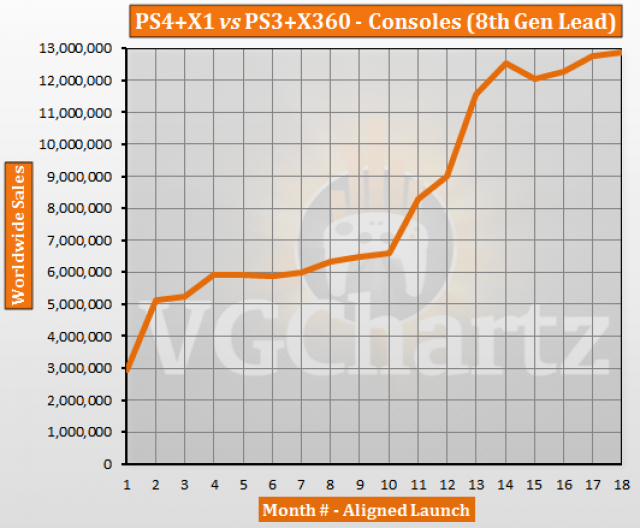 This is proof that the only reason 7th gen is dominating 8th gen is the lack of casuals. Xbox and PlayStation are doing better, but Nintendo is doing awful .

Not sure how you say dominating when it clearly says this Gen has sold 12million more. This just goes to show that people love gaming more. I do agree that the WiiU has horrible sales and is sure affecting the score.

This chart is for the XB1 and PS4. Both have sold more than their previous consoles. The Wii U is selling so bad however, it destroys this lead and drags it down an additional 6-7 million.

Consoles arent dying, they will continie to survive and set the standards for graphics

Who said they were dying?, and who said they will set the standard, PC seems to be doing that with SC anyway.

PS3 and 360 started picking up steam because they were getting some of the best games ever made at that point. Same thing is going to happen to PS4 and XBone.

i think between xb1 and PS4 sales will be flat or slightly down with PS4 selling more than PS3 and xb1 selling less than 360. Wii U will be down by more than 80 million from wii so that's terrible.

Perhaps it's better to compare the previous gen? I don't think this gen will match the 6th gen which isn't good because that means no growth over 2 gens.


When you consider this, there is considerable growth in the core demographic (as well as casual). We're just more segregated.

that's just speculation. Casuals don't buy a console early on usually anyway. We don't know what they are doing this gen, them buying the wii early on is clearly the exception.

And yet people want to say this gen is doomed! Dooooooomed!

This is why I thought the 50% marketshare, or well 65 or so between these consoles was impressive.

Looks relatively stagnant outside of the holiday seasons. this might get interesting in later years when PS3 and Xbox 360 really started to pick up steam