Civilization II has been all over the internet recently with the news of the man who played for ten years and created an Orwellian dystopian world. Many have complained about how no such thing would be possible in a game as oversimplified as Civilization V. This is a long-standing complaint, that the game is far too easy and does not provide enough control to be considered a Civilization game. Unfortunately, if you hold that opinion, you may as well stop reading now; this expansion is not going to change your mind. For everyone else, however, this is a breath of fresh air. In an industry where the majority of downloadable content consists of map packs and novelty skins, it is great to see that one developer, at least, is willing to make some serious improvements to its game. It’s not so great to see the price tag, a whopping $30, or more than half the price of a full PC game. 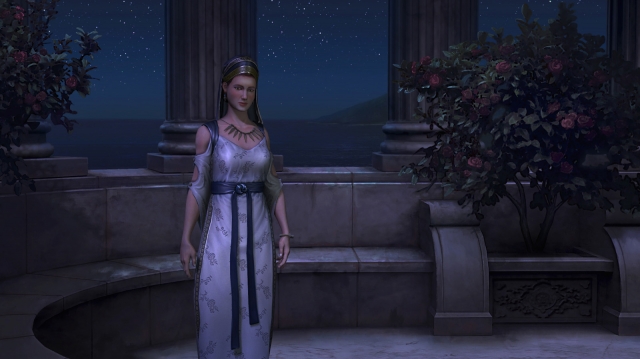 I will spend most of this review discussing the changes made to what we already see as a highly enjoyable strategy game, so if you want to know more about the base game, have a look at our review of it by Matt Ashbaugh.

The first change strikes you when you first open the game and discover that the cutscene can be skipped. This is a small touch, but it shows that Firaxis have actually been listening, which is never a bad thing. From the main menu, you can see a new background, but not much else that has changed.

You begin to observe the differences when you start to set up a game. Nine new civilizations have been added to the game, bringing the total up to 27 without any other DLC. A handful of the other civilizations’ perks have been modified to involve faith, but the Byzantines, a new civilization, are centred around it, gaining a bonus belief when their religion is founded. Other bonuses range from the Mayan bonus, which grants you a Great Person at the end of every Long Count calendar (contrary to popular belief, this Great Person will not cause an enormous planet to collide with your civilization, because that’s not what the Long Count means), to the Netherlands bonus which takes advantage of improvements in diplomacy by allowing you to keep half of the happiness granted by luxury resources that you have traded away. A 50% increase in the number of playable civs is nothing to shake a stick at, especially when the range of bonuses (boni?) is so wide.

Religion is the most important addition to the game, and it functions so well that you would think it had been there from launch day. When you first build a Shrine, you choose a Pantheon for your Civilization, which grants you some form of bonus, which can be chosen from a list. It also starts to grant you one Faith per turn (Faith is a new resource, akin to Culture or Science), and your FPT can be increased by later buildings. Once you have crossed a certain threshold, you acquire a Great Prophet, one of the two new Great People available. He can turn your Pantheon into a full-blown religion. You choose a name and corresponding symbol (only aesthetic; they are all identical) and choose a Founder belief, which benefits you, and a Follower belief, which benefits all cities that follow your religion. A later Prophet can enhance your religion to add two more beliefs. 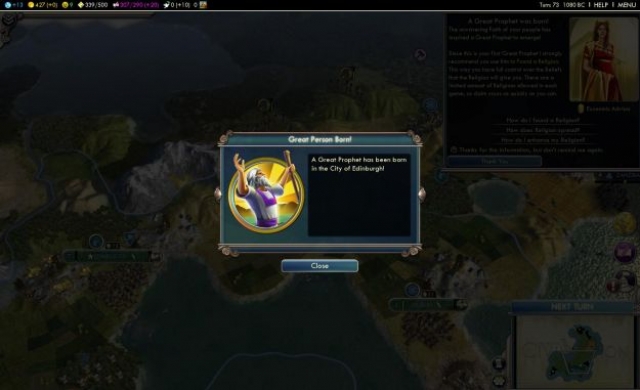 When your religion is founded, it starts to spread around the world, to cities up to ten tiles away. Any civilization who adopts your religion organically like this will have an improved opinion of you. Missionaries and Great Prophets can spread religion to city states to improve your influence, but other leaders become furious if they begin to spread your heathen religion into their lands.

As you can see, the religion mechanic is fully fleshed out and affects the gameplay in a multitude of ways. It’s one more thing to focus on, which can provide benefits to nearly every area of the game – from the purchasing of Great People, to improved diplomacy, to increased happiness.

Espionage only arrives later in the game, but can be nearly as important. Everybody receives one spy when the first player reaches the Renaissance Era (the British Empire now gain an extra spy at this point) and one more when each new era is reached. This makes eras worth something other than a change of clothes for your advisors and workers. The National Intelligence Agency wonder, one of nine new wonders, grants you another. By the end, then, you have 5-6 spies. These can be sent to other civilizations’ cities where they spend a few dozen turns stealing technologies, to City-States where they secretly rig elections in your favour, or to your own cities, where they have a chance of killing any enemy agents who are stealing from you. In a nice touch, the civilization in question will usually apologise profusely when this happens, at which point you can forgive or condemn them. You can also ask them to stop spying on you, but they won’t for very long, no matter how strongly they agree to do so. Other, more subtle gains are gleaned from espionage. My spies can inform me that Alexander is building up a huge army in preparation for war, for example. 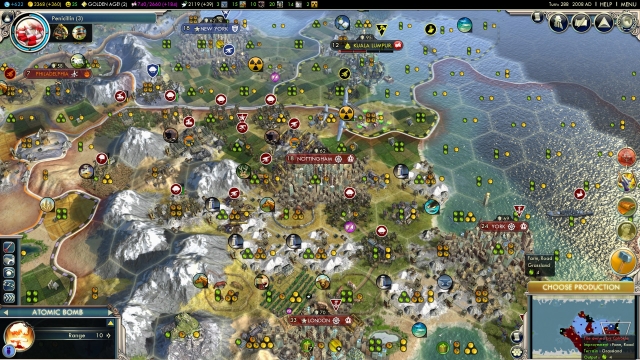 This ties in well with diplomacy, which is no longer questionable at the best of times and painful at the worst. Civilizations do not suddenly go from being your best friends to despising you. Your relationship can improve when you declare friendship, set up embassies in their capital, help them in wars or have them follow your religion without force. Naturally, it will worsen if you are getting friendly with their enemies, make arrogant demands or denounce them. War is quite often forgiven in favour of positive relations, especially if they were the aggressors. Espionage can be used to improve your relations with other leaders. For example, I may learn that Caesar is plotting against Napoleon, and inform Napoleon.

Embassies make the game that little bit more lifelike. You gain line of sight of that civilization’s capital, and you cannot sign Open Borders agreements and Defensive Pacts without them. Research Agreements are similarly limited: you must have made a Declaration of Friendship before the option is available. Once you are friendly with other civilizations, they will offer to renew expiring deals without your even asking.

All of the reforms to diplomacy, together with some changes to how City States act, make Diplomacy Victory viable for the first time. City States now give out multiple quests at a time, and these quests aren’t always just “Kill this city state” (I have never seen this come up in Gods and Kings, actually) or “Destroy a barbarian encampment”. You can be asked to bully other city states, build wonders and recruit great people (present in the original game, but not common) or gather the most of a certain resource within a set number of turns. Gifting units and pledging to protect provide clear bonuses to influence, and spies can work internal politics in your favour. In addition, you cannot vote for yourself in the UN Vote, so relations with other leaders are important too.

Combat has not gone unchanged in Gods and Kings. All units are hardier than before, and the “heal instantly” option on promotion does not fully heal your unit; near-suicide attacks are now less appealing, so a higher level of strategy is required. Naval combat becomes more useful due to the fact that certain ships can melee attack and capture cities. A handful of new units have been added to fill in gaps, but not many. The Great Admiral is the second of the new Great People, and fully heals all friendly units within a two tile radius. On the topic of Great People, only a Great Artist can be used to begin a Golden Age now (he loses the Culture Bomb ability, which is replaced by the Great General’s Citadel), so the others must be used as intended – the Scientist to learn technologies, the Engineer to hurry production, and so on – or used to create specialist buildings. 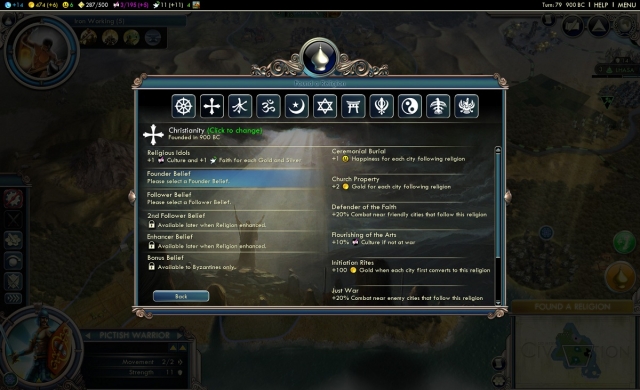 These changes all combine to make something far more than a simple DLC pack, something which actually comes close to changing the core of the game. I can’t honestly say that it makes anything worse; all of the changes have improved the gameplay, whether it is by a small amount, like the new combat units filling in gaps in progression, or a considerable one, like the overhauled diplomacy or excellently implemented religion.

The trouble, as I mentioned earlier, is the price tag. Many entire games can be bought for the price of $30. That said, few games will get you anywhere near as much playability as Civilization V, and now that the game is close to two years old, you may already be bored of it. You’ll certainly get several enjoyable matches out of this expansion. If you enjoyed Civilization V, and you can stomach the price tag of Gods and Kings, then I wholeheartedly recommend the expansion. It hasn’t gone back to the days of Civilization III, though religion and espionage are throwbacks to earlier games, but other games in the genre exist to replicate that experience. The Civilization series has changed, and Gods and Kings is a great step in the same direction – the direction of playability and enjoyment.

This review is based on a review code of the game, provided by the publisher.