I'm kind of pissed off really.

See, I have this crazy thing I do where I hope for the best.  Yeah, yeah.  I know.  I think it's just a phase I'm working through.  I'll be working through it quite a bit faster if more things like the development of Fuse happen.  Insomniac Games, you know those guys right?  They made Spyro before he sucked and Ratchet & Clank in both pre-and-post suckage phases.  Back in 2011 they revealed that they had a new game in the works called Overstrike.

What could... um, should have been

It was going to be a colorful, over-the-top, rather cartoony shooter that looked to have some of that old school Insomniac charm.  A sort of tongue-in-cheek alien invasion shooter thing with the same flair for imaginative weapons that helped to make Ratchet & Clank so delightful.  It was also to be their first non-Sony exclusive title.  Meaning they had ownership of it, which normally means they would be even more motivated to give it their all.

And then they showed the game to a focus group.  Suddenly the game was "too cartoony" to be taken seriously.  The concept of playing a team of four "support" characters who were meant to work together in "stealth" situations was seen as "lacking the fun factor".  Which meant Overstrike became Fuse.

We're here to kick ass and be original... and we're all out of original.

With Fuse, what you see is completely what you get.  A team of (Hollywood's concepts of) genderly and racially balanced attractive people who shoot sci-fi guns at sci-fi bad guys.  That's kind of it.

Maybe it isn't fair to hold up the reality of the game to the impossible perfection of the "what could have been".  The problem is that even without knowing the history, the game we got is as generic as they come.  I could describe the plot of the game but you've heard it all before:

"In the not-so-distant-future, a new kind of arms race is about to begin.  When rogue paramilitary company Raven discovers an alien energy source called Fuse deep within a classified government facility".

Alright, story isn't everything in gaming.  So how's the gameplay?

Well, Fuse is a four person co-op online shooter where the unique attributes of each operative is... yeah, you've heard that before too. 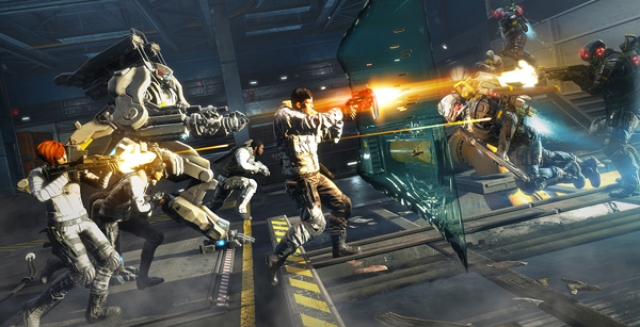 To be completely fair, the concept is a good one.  There are four playable characters who each have different personalities and unique weapons.  Unlike other games of the type, you are free to leap into any non-human controlled character and take control of them.  This allows you the freedom to try them all out without separate playthroughs or simply taking control of the right tool for the right job.  These weapons run off of the titular alien material "Fuse" which gives them some of that old Insomniac imagination and charm.

Dalton gets a magshield that is really a mobile cover system for his team.  It blocks shots coming in while allowing you and your team's shots to go through it.  While operating, it will also absorb the energy from the enemy attacks and you are able to release it in a burst that can liquify those caught too close to the blast.  Naya can fire miniature blackholes.  Jacob has a crossbow-like weapon that has a sniper scope and is capable of pinning enemies to walls with its flame bolts.  Finally, Isabelle gets a gun that can freeze enemies into crystals that will explode like shrapnel when hit.

Aside from these character specific weapons/abilities, each character can hold a secondary weapon and a sidearm.  However, other than the fact that they have cool-sounding names they are pretty basic.  You can't help but be disappointed with how un-Insomniac the selection of weapons ends up being.

You will gain experience for every enemy killed, with bonuses added for any creative teamwork you used.  Through leveling up, the characters gain skill points they can put towards upgrading the Fuse weapon abilities.  These are hardly game-altering in many cases, though.  Unless you consider getting a two percent higher chance of performing a critical hit game-altering.

Disappointment aside, Fuse does function well.  You wouldn't think the mere act of functioning without bugs or glitchy mechanics could be anything more than just what is expected.  However, the current track record for high-budget titles is not exactly spotless.  So when the shooting and cover mechanics actually function as they should, you are going to get a "good boy" and a scratch behind the ears. 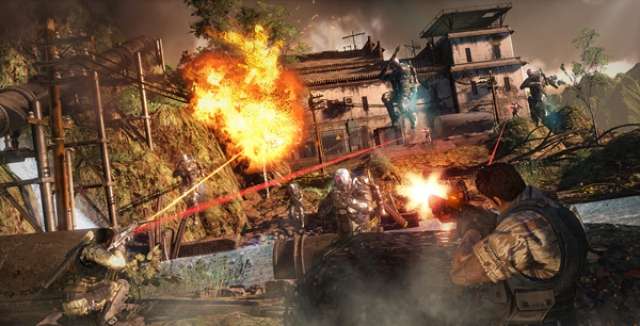 Fuse is aesthetically inoffensive; right in that butterzone of the average of what is expected from a current gen console game.  However, the enemy design is highly unimaginative.  Not only that, but they are quite the bullet sponges.  When your basic low level grunt enemy can survive multiple headshots (unless playing as your sniper) gunfights just become slogfests.

Simply put, each new enemy variant seems to have features that drag out the action instead of enhance it.  Which is a problem when the action is not overly encumbered with fun.  You get invisible enemies that sneak up on you and drag you around the map.  You get those lovely one-shotting snipers.  You even get shielded enemies that let loose a healing pulse for other enemies in a wide radius.  None of which make the game more challenging beyond the testing of how far your mental stamina can stretch.

While it can be said to be a lot more fun with a group of people, I guess that could be said of almost any game.  Sharing an experience with people you enjoy being around should logically be more fun.  However, it doesn't truly feel like a co-op experience.  I know it isn't easy to make a game that can be completed on your own feel like the co-op is important.  Randomly placing doors that have multiple switches that must be simultaneously flipped doesn't feel like anything more than a stop gap that forces the team to regroup before moving to the next area.  The team never feels like a hindrance, the game just never makes you feel much like a team either.

So really the five chapters in the roughly eight hour campaign can be summed up like so:  First, start at point A and make your way to point B.  Attempt to be stealthy.  For no truly explained reason, your stealth will fail and you must shoot all the bad people.  Then a second wave with a bigger bad person will show up which you must flank because it takes more damage in the back.  Upon the bigger bad person being defeated you are now free to use the heavy weapon that was left behind to mop up the third wave who seem tailor made to test your new weapon on.

Beyond the main campaign there is a horde-like Echelon mode that makes a few humorous nods to Smash TV.  In a weird way this mode is more enjoyable, because it isn't pretending to be extra serious.  It treats the game like an arcade mode shooter and comes out ahead for it.

Sadly, Fuse just brings the cynic out of me.  It feels less like the fun loving action shooter game I know Insomniac can make and more like a game made by committee.  It feels like the game was made to follow an EA checklist full of concepts approved by focus testing; it's an attempt at another Borderlands-style game but without the "goofiness".

Look, this game... this game is like when you go to a restaurant and order a fancy grilled cheese sandwich.  You are promised artisan bread and gourmet cheeses.  However, what you get is some grilled Wonder Bread with some butter in the middle.  It's grilled just right and there isn't anything really wrong with the ingredients, they just aren't what you were expecting.

It is a perfectly competent game.  I guess some out there could enjoy it.  I just personally don't think you'll be missing much by saving your $60 for something else.

This review is based on a PlayStation 3 review copy of Fuse provided by the publisher.