The Legend of Zelda: The Wind Waker HD (WiiU) - Review

The Wind Waker didn't get a fair shake when it was first revealed in 2002. Many fans decried the game for its "cartoon" graphics, moving away from the more "realistic" graphical style found in Ocarina of Time and Majora's Mask (and Nintendo's GameCube tech demo shown at Spaceworld). It received the derogatory "Celda" moniker to make fun of its cel-shading and anticipation was rather muted for a Zelda title. Once it came out, however, it received glowing reviews, and fans began to warm up to Link's new voyage. Over time, Wind Waker became a popular, well-remembered title by the Zelda fanbase. So it's appropriate that the Wii U sees an HD remake of Wind Waker for its first Zelda title, capitalizing on the good feelings from the fanbase and showing a new generation of gamers why this game is so well loved. 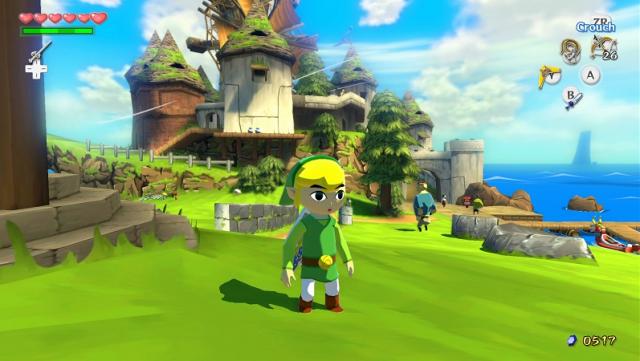 Wind Waker's art style made it distinct from other games on the market back in 2003. Even now, the game is often lauded for its graphics. Wind Waker HD accentuates it by running in full 1080p at 60 frames per second with improved lighting effects and dynamic shadows. The game looks even more vibrant than during its initial release and will awash you in the beauty of its colors; the many expressions of Link, Tetra and the pirates; the villagers, enemies and more. To me, the biggest improvement in the presentation department is the increased draw distance. In the original game, the ocean would feel much more empty and islands would simply pop into existence as you approached them. But in Wind Waker HD, silhouettes of islands can be seen one or two quadrants ahead, so there is always something on the horizon, something to set course for. Wind Waker HD also boasts remastered audio, with some songs and sound bite changes more obvious than others. If you wish, you can play the game on the GamePad only (press the Select/Minus button), but you'll lose the ability to use the second screen as a dynamic inventory (and will have to pause the game to see it). I recommend playing on the TV because of the convenience of the second screen inventory (and to enjoy the beautiful HD, of course).

The storyline remains the same as the original release, with Link meeting Tetra and her pirate crew and his sister, Aryll, getting kidnapped, which sets the stage for another epic adventure in the Legend of Zelda series. What has changed is that the game feels faster; several alterations have been made to streamline the experience. Link's grappling hook now grips on to objects quicker so there's less time spent watching a quick cutscene of the rope latching on. When Link uses the Wind Waker repeatedly, it will skip the "You conducted the ____!" message and the desired effect will occur immediately (really useful for certain dungeons). The much maligned Triforce Quest near the end of the game has been streamlined (I'll cover this in more detail later). Wind Waker HD has sped up an experience that was sometimes sluggish and made it more enjoyable to play. 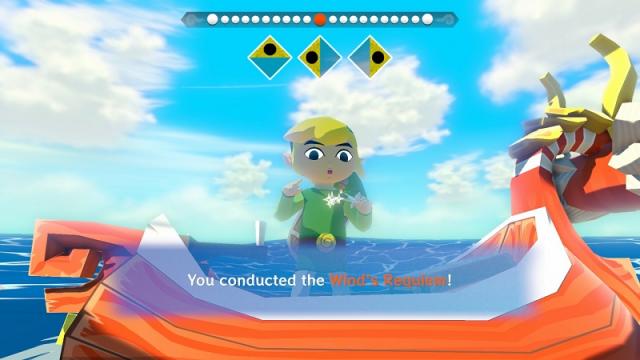 Other changes in Wind Waker HD have been made for the player's convenience. Link starts the game with a 500 rupee bag (as opposed to the original release, in which he started with 200). Previous players who found the sailing took too long or became frustrated by having to change the wind constantly can pick up the Super Sail, which speeds up travel and always puts the wind at their backs. The GamePad's gyroscope and accelerometer allow for much more intuitive aiming with items such as the Bow and Arrow, Boomerang and Hookshot.

Dungeons in Wind Waker HD are the game's strong point. They are never so difficult that they feel unfair, but they offer a challenge for your puzzle-solving skills. This is where the game's clever mechanic of Link looking at points of interest shines brightest. When you get stuck, run around the room and notice where Link's eyes turn to - his eyes will often guide you to the solution. Other dungeons will see Link teamed up with another character, which was not a common thing back in 2003. Since then we've seen the rise of the co-op game and looking back at it, maybe it would have been nice if the second characters had more expansive AI or allowed a second player to take control. Still, these dungeons work very well and show off Wind Waker's shrewd dungeon design. 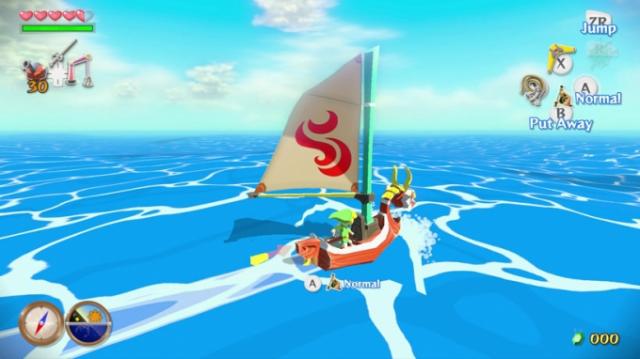 Combat is still relatively simple, as most minor enemies go down with a slices from your sword (or other weapon of choice). Most bosses don't pose much of a threat either, but boss battles are still very fun. The game's lack of difficulty was a major complaint back in 2003, but Nintendo has added a Hero Mode to Wind Waker HD. As in Skyward Sword, Hero Mode ups the difficulty by removing all recovery heart drops and buffing enemies, who can now deal double their normal damage. It sounds like a simple change but it will drastically alter how you play the game. You can't throw caution to the wind and be willing to absorb damage, because in Hero Mode there are no recovery hearts in a nearby jar for you. Those who found the game too easy on GameCube or just want a tough challenge will enjoy Hero Mode.

If you had a Game Boy Advance and a GC-GBA connector cable, you may remember that the original Wind Waker allowed you to take control of Tingle, who could interact with the game in various ways, such as dropping bombs. That feature has been removed, but Wind Waker HD offers a more compelling alternative: Miiverse functionality. Throughout the game you will see bottles in the ocean containing messages. Each bottle you pick up can be viewed on the inventory screen. These bottles contain messages from other Wind Waker HD players, who write about their experience playing the game. Often these messages come with Pictograph pictures attached, which show various areas in the game. Some players have fun with it, having Link make silly poses in front of the camera at various locales. Even if you don't write any messages yourself, picking up the bottles is really cool and makes you feel like you're out at sea. Nintendo has perfectly integrated their new-school Miiverse feature into this old-school Zelda title without breaking immersion and they should be applauded for that. 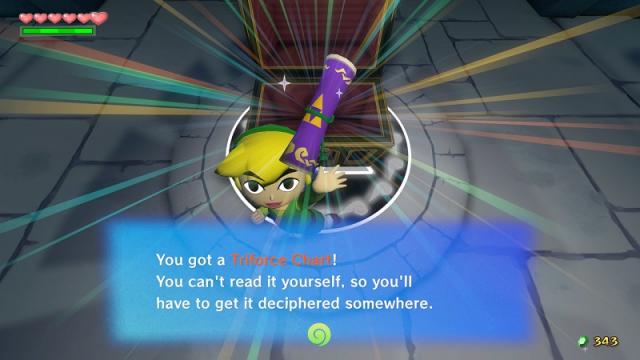 You just had a post-traumatic stress attack, didn't you?

The Triforce Quest, which many saw as a tedious sailing quest to pad game length, is still around, but it is now much less painful. Where the original game required players to find eight Triforce charts, have Tingle translate them and then go find where each shard is buried underwater, now players only have to do this for three shards, with the other five shards being located where the charts originally were. This makes the game's worst part go by quicker, but it's still not enough to prevent some degree of frustration and boredom during this section. Perhaps if the game allowed for players to collect some of the shards earlier, this massive quest could be split up throughout the game and not completely halt the game's momentum at the end. That said, it's much better this time around and doesn't drag down the game's enjoyment too much.

You'll likely get about 25-30 hours out of Wind Waker HD, much the same as its predecessor (perhaps less if you're a previous player who remembers what to do). Scouring the ocean for the many different items and trinkets hidden about can add many more hours to the experience. It is a sizeable game that will take a while to complete, so even though there isn't a multiplayer or co-op element, you won't feel cheated. 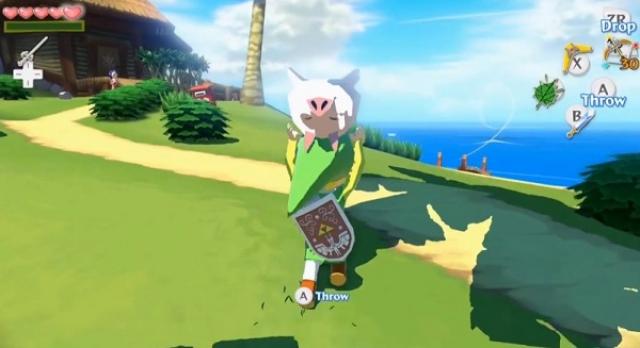 Nintendo surprised many people when they announced that Wind Waker was getting the HD treatment, as opposed to Majora's Mask or Twilight Princess. Having played Wind Waker HD, I can safely say this was the right Zelda title to remake. Not only is the game even more beautiful than it once was, but they have managed to make simple yet amazing improvements that make this game even better than it was a decade ago. Some will even argue that these changes make Wind Waker the best in the series and I wouldn't find anything wrong with that opinion. The Legend of Zelda: The Wind Waker HD takes what was already a classic and makes it an amazing experience that everyone needs to play, even if it means buying a Wii U for the first time.

This review is based on a digital copy of The Legend of Zelda: The Wind Waker HD for the WiiU