A while back, I wrote an article comparing film criticism and game criticism, and at the time my opinion was that game review criticism was more credible due to the fact that it was common practice to take graphics, sound, story, gameplay, controls, value, and dozens of other factors into consideration rather than just denouncing a game's quality for one poor element, such as the story. On the flip side, film criticism seems to hinge more reliably on story and characters, and other factors such as the cinematography or visual effects can be disregarded if the story is bad.

Case in point: the Michael Bay Transformers movies. All three of these have some of the best visual effects the world has seen thus far - the production values are through the roof - and they're pretty fun to watch, even if the story and characters are mind-numbingly stupid. Despite their many qualities, these films are still critically reviled. I bring up these movies because I feel that Call of Duty: Ghosts operates on the same level as a Michael Bay movie: lots of awesome explosions and a bunch of fun in certain circumstances, but hollow, empty, and devoid of any heart or meaning. 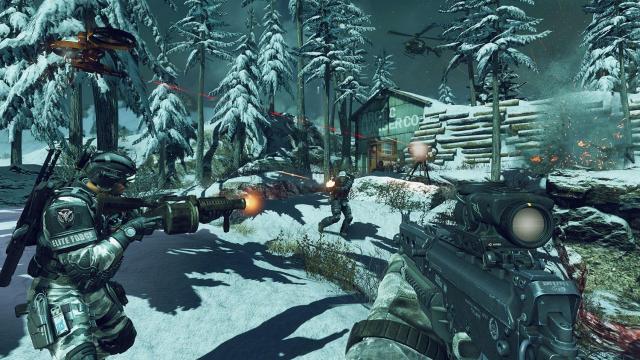 Most of these negatives come directly from the campaign, which sees you playing as one of two brothers as they deal with their family issues at the same time they are caught up in a war between the United States and South America. Not Brazil or Argentina or Chile, but all of South America, who are collectively fed up with Americans launching space weapons, so they decide to take it over. 'South America' would not be an entity I'd expect to take up arms against the US, but one can only rely on Nazis, the Soviets, China, and the Middle East for so long.

Sadly, this is really the only instance of creativity to be wrought from the single player experience. You've seen it all before: preening machismo, explosions, faux sentiment during times of hardship meant to tug more at the rope of the flag than the strings of your heart, explosions, oddly reductive world building wherein every story character is directly linked to one another even outside of the central conflict, explosions, guns, quick-time events, and more explosions. The campaign – which is 18 levels long and lasts about six hours – is nothing but one climax to the next; there is no room for levity or build-up, and the bulk of the exposition is given at the loading screens and during quick time events where the player's involvement is as restricted to “Press Square to win.”

The Ghosts of the title are an elite squad who specialize in guerrilla tactics, according to in-game lore; in practice they're just another squad, and they don't even show up until about halfway through. I was really looking forward to using stealth and guerrilla tactics, but any attempt at encouraging stealth is quickly ditched in favor of explosions. You know what I think would make a great Call of Duty game that nobody would expect but which could be awesome? The Second American Civil War. Given the state of modern America, where the right and left are constantly bickering, claiming the other is ruining the country, it'd be fun to see that escalate into a right vs. left war, mimicking the north vs. south of the past. If done right, there would be two different campaigns so you can play from both sides of the spectrum and see it from the perspective both ideologies, showing that, really, we all want the same thing deep down even if the methods are different. It would touch on a lot of hot button topics and be a genuine cultural phenomenon if done right, I just don't think such a thing could be expected out of Activision. 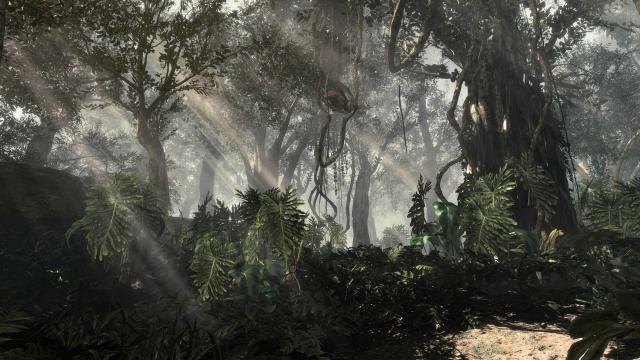 And therein lies my problem with Call of Duty: Ghosts, as well as why I compared it to a Michael Bay movie. There's potential to discover a pretty good story hidden within, but if you were just playing the game and not paying attention to the loading screen narrative and the hidden audio logs, you simply wouldn't know it. At this point in the franchise, it's clear that there's practically no interest in creating a deep or nuanced world. Explosions sell, so there's no room for any sissy moments of quiet introspection. No, this is an interactive action movie, designed clearly to make you feel like a bad-ass, and no other game emulates that euphoric sensation of bombast better than Call of Duty.

The problem is, that's all there is to the game; it's just one long series of shooting ranges and quick-time events connected by a narrow corridor that you must run through as things explode around you. It's clear that developer Infinity Ward tried to emulate their past successes (Read: Call of Duty 4: Modern Warfare) by making missions that are said to be stealth centric or incorporate some sort of alternate gameplay mechanic, but that all goes out the window in lieu of more explosions. Alas, I think Spec Ops: The Line has raised my expectations of the genre's ability to instil meaning into its pointless action.

The combination of strict linearity with simple gameplay leaves little room for deviance; stealth is punished except in incredibly rare and short lived instances, and it's impossible to not follow along with the set list of events that have been programmed. I'm not exaggerating when I say that I feel this game could be a rail shooter and achieve the same effect. To their credit, the developers do try to mix things up a bit by including Riley the German shepherd, or through the alternate control schemes underwater or in space, but all paths lead to the same outcome: all out war. Without exception, each different level's attempt at uniqueness results in the same, tired shooting gallery of gunfights followed by a brash escape.

There is a very important story-writing rule that states that a plot needs a series of peaks and valleys if the silence of serenity or the bombast of a climax is to be felt to its fullest; Call of Duty is and has been nothing but climax since 2009. Paraphrasing Syndrome from the Pixar film The Incredibles, “When everything is super, nothing is.” When you're experiencing nothing but action and adrenaline for six hours straight, you grow numb to it, no matter how masterfully the symphony of explosions has been orchestrated. 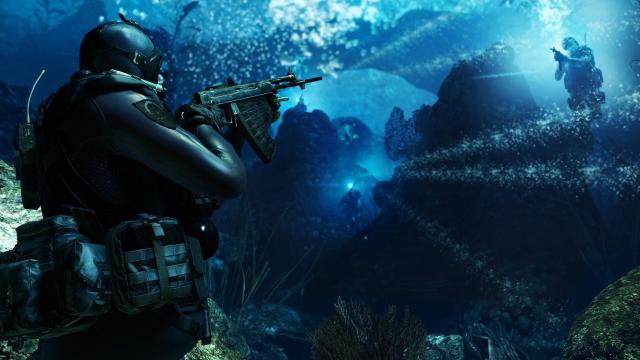 Perhaps these complaints fall on deaf ears; everyone knows that campaigns in Call of Duty are a joke, right? Really, nobody goes to see Bad Boys II for the nuanced characters or subtleties of the plot, they know what they're getting into. Multiplayer is where it's at, and Call of Duty: Ghosts presumes to have you covered. There are three distinct multiplayer modes to choose from: Co-op campaign, Extinction, and traditional multiplayer, which houses the familiar set of game modes you know and love such as deathmatch and domination. Very familiar, indeed.

In fact, the traditional game modes haven't changed much at all since 2009's Modern Warfare 2, and that's when the red flag really shot up. I played Modern Warfare and Modern Warfare 2 a lot back in the day, but took a break when I saw that the campaigns were getting shorter and the multiplayer lacked any real creativity. I was tempted back to the franchise by Ghosts' promise of a new story, in a new world, with new characters, and so I hoped it'd be a fresh start and a chance to really reinvigorate the franchise; I was wrong, so very wrong.

Things haven't changed in four years, despite there being three games in between Modern Warfare 2 and Ghosts. The multiplayer is almost identical, the single player suffers the same major, glaring flaws, and the lone new mode – Extinction – is basically the same as Nazi Zombies. I have already played a decent chunk of the multiplayer and fully intend to play more of it in the future, but every time I turn the game on to do so, I get a strong sense of deja vu, like I've done this before. The maps are different and there are some slight differences to the weapons and the perk system, but this is basically the same game as it was in 2009.

The only thing that's truly new is Extinction mode. Like Nazi Zombies, it's an arcade-style, co-op base defence game, only this time you have to carry a drill to take out alien pods instead of boarding up windows and doors to keep the zombies out. You get money to buy weapons and tools, and can use your ensuing skill points to upgrade your abilities or activate temporary defences. Beyond this one mode, there's nothing new or original in Call of Duty: Ghosts' multiplayer. Every ability, and every other game mode is lifted directly from earlier entries in the series. 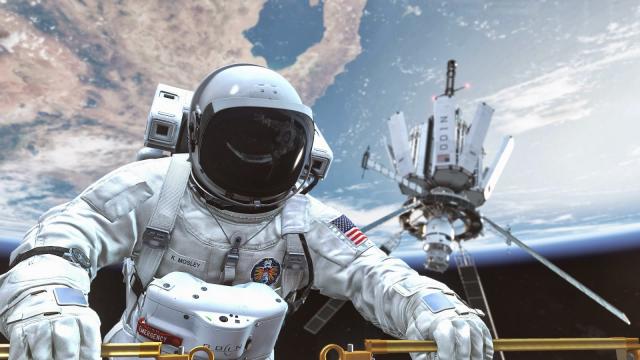 It's hard to stress just how uninspired Call of Duty: Ghosts truly is. And yet despite my disappointment in that respect, my time with the game was speckled with occasional good experiences and awe. While Ghosts may not be original or particularly interesting, it certainly stands as a testament for how good production values can take something that is deeply flawed and occasionally insulting to the player and still manage to make it fun. Yes, the story is poor, and the multiplayer is the very definition of stagnant, but the base gameplay remains fun even if little has changed.

The constant stream of one climax after another can get exhausting and lose meaning, but taking each set piece on its own, you have an impressive testament to the power of interactive media, and the graphics - especially the jungle and underwater levels, as well as the light effects - are easily amongst the best I've ever seen, even if that's just due to the fact that it's on new hardware. The controls are impeccable and, like always, a wide array of guns and military hardware rounds things out.

Despite being well made, Ghosts is a fundamentally flawed game. When the story is this abysmal and the multiplayer is this stagnant, there's really no reason to buy what basically amounts to a $60 multiplayer map pack, even if it does come with fifteen maps. Call of Duty: Ghosts certainly can be fun under a specific set of circumstances, like if you're playing with your buddies online or via split screen with bots, but if you've played a Call of Duty game in the last four years, there's no reason to get Call of Duty: Ghosts. Frankly, it's time to put this one out to pasture and move on.

This review is based on a retail copy of Call of Duty: Ghosts for the PS4