Sonic Boom: Rise of Lyric Sings Out of Tune - Preview

I could do a whole lead-in about the inconsistent quality of Sonic the Hedgehog titles since the Dreamcast era, but that's a subject you've likely heard quite enough of already. Sonic Boom: Rise of Lyric is the next Sonic title coming down the pipeline, this time from a new developer, Big Red Button Entertainment.

The game is a tie-in to the upcoming Sonic Boom cartoon series and features radically altered character models, including a long-legged Sonic the Hedgehog and a majorly buffed up Knuckles the Echidna. Entertainment tie-in video games don't have the best history in gaming, and after experiencing Sonic Boom: Rise of Lyric, I came away feeling this particular title is unfortunately headed for the mediocrity we've come to expect more often than not from such tie-ins. 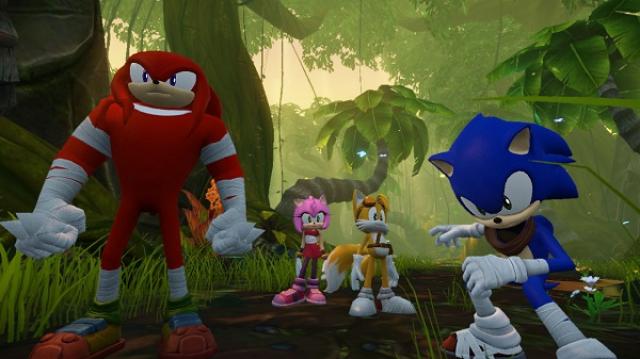 I got to play as Sonic and Knuckles. Sonic has his traditional jump and spin dash, and can also bounce and punch. Knuckles has the ability to climb walls. Both characters use a grapple beam attached to their hands as a key gameplay element. In the demo, the grapple beam was used to drag a mine cart across the tracks, pull switches, and yank enemy shields away from them before finishing them off. Sonic also had a "hedgehog sense" which turned the screen blue and revealed secrets (in this case, foot tracks) that cannot be seen in normal lighting.

The demo tasked me with bringing a mine cart across multiple pits and taking out various robotic enemies. While playing, I couldn't help but feel a sense of malaise; we've seen platformers do this all the time and Sonic Boom: Rise of Lyric did nothing that would make it stand out amongst the many games that have come before it. Things weren't help by a combat system wasn't particularly interesting. Sonic and Knuckles could punch through just about any enemy with enough hits. 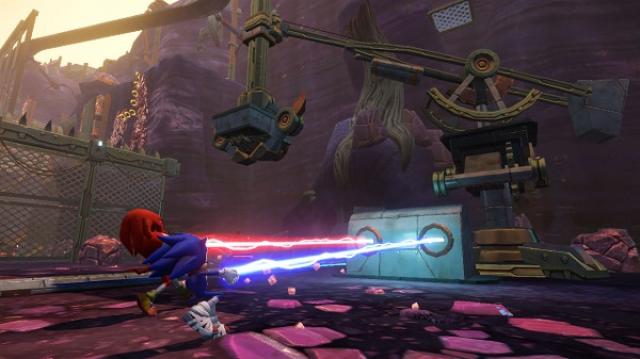 Occasional uses of the grapple beam keep it from being a straight-up button masher, but that's not enough to keep things interesting. Like other Sonic games, rings serve as a health indicator, but you only lose a portion of your rings after each hit, so it never felt like I was remotely in danger.

I should mention that part of my discontent with my experience could come from the fact that this is a game meant to be played by the younger audiences that will be watching the Sonic Boom TV series. That isn't the kind of audience that would respond positively to a blisteringly difficult game. Still, my time with Sonic Boom: Rise of Lyric was underwhelming, and I can only hope the game improves between now and its November 2014 release on Wii U.