After a surprisingly short delay between announcement and release, LittleBigPlanet 3 has made its way to PS3 and PS4. It's the first console iteration without Media Molecule at the helm, and any fan of the series will tell you, Sumo Digital has quite big shoes to fill. While LittleBigPlanet 3 doesn't quite live up to the legacy of its forefathers, it's a promising start for a new developer of the mainline series. 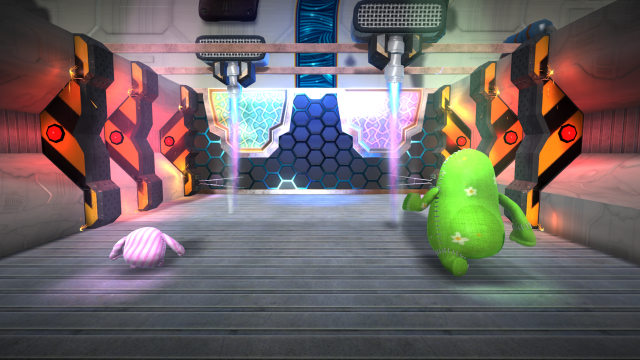 Sackboy is back, and for the first time he's come with some friends. The main addition to LittleBigPlanet 3 are extra characters; Toggle, Swoop, and Oddsock. Each of these new characters comes with special abilities that makes their inclusion useful for level creation. Swoop can fly in the air and has a physics-based dive for speed. Toggle has two forms with different sizes, weights, and density which he can instantaneously switch between with a press of L1. Finally, Oddsock runs much faster than Sackboy and has a wall-jump. All of these abilities were possible to code into LittleBigPlanet 2 with enough time and know-how, but there's something to be said for receiving these additions from professional developers. Now all of them can easily be added to any level you desire. The only real issue with the new characters as a whole is that they aren't used very effectively in the game's included campaign, with only one story level and a boss fight dedicated to each.

Oddsock is by far the best new character, with his quick speed and wall-jumping adding something to the series that was previously only ever partially achieved in user made levels. I've already played a few enjoyable, fast paced platforming levels based around Oddsock and I look forward to more being created. Toggle adds the potential for some interesting puzzle platforming, but the application of his abilities is much more limited than Oddsock's. Finally, Swoop is the weakest of the three, with levels that feel one-note so far, but I'm hopeful that some more unique uses of his abilities will be thought up in the future. 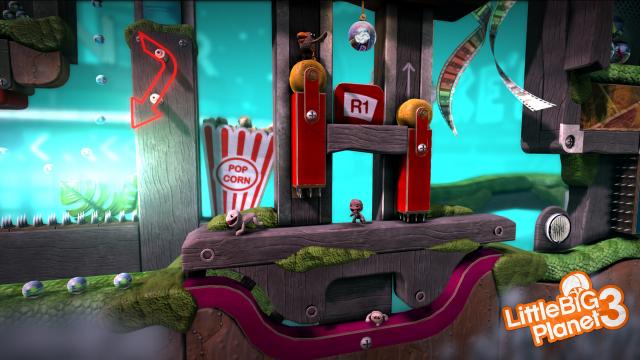 Other additions to the franchise's design are not as obvious at first but are arguably much more meaningful. Sackboy can now hold multiple power-ups and switch between them, giving him a larger variety of abilities in any given level. Going back to previous levels and using power-ups you didn't originally have also largely replaces stickers as the reason for backtracking. The number of layers a level can be made up of has also massively increased to 16 playable layers. This allows for much more dense level designs that can quickly fill the old level thermometers that acted as the hard and fast limit on how complex your levels could be in previous LittleBigPlanet titles. LittleBigPlanet 3 adds a dynamic thermometer which can be used to stream only the relevant sections of your level at any given time. There's still a limit to how complex your level can be overall, but use of the dynamic thermometer effectively increases it enormously if managed correctly. The last notable inclusion is a task list that allows for simple quest management within levels.

These are all useful additions to the creation aspect of LittleBigPlanet but they feel more iterative than the giant leap from the first game to the second. Adding new characters and dynamic thermometers is great, but it doesn't match adding logic circuitry and NPC sackbots. I'm sure that community will eventually be able to show that these are much more meaningful additions than they seem at first, but for the moment it doesn't massively impress.

The bulk of my complaints, though, don't actually stem from the development of the tool set for creating levels, but from the levels that the developers themselves have created with those tools. There are three chapters in the campaign, along with a prologue, and each of the three chapters is given a hubworld. This is a brilliant addition as it gives the player an area to explore and work through at their leisure. Collected gold bells in these hub areas can be spent in a costume store on new outfits for the different characters. You also gain access to more areas of the hubworld as you obtain new characters and abilities for Sackboy, so there are certainly incentives to replaying them. 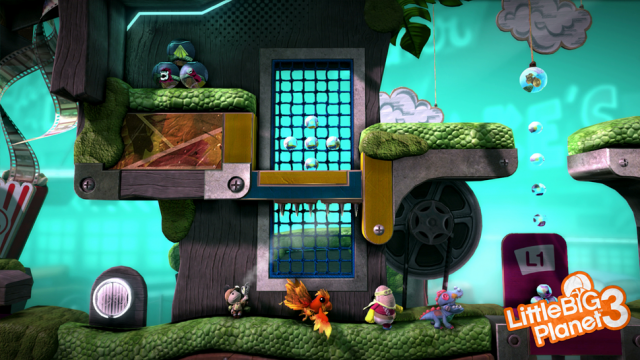 Issues start arising, however, when you leave these hubworlds to go into the campaign itself. It consists of a cute enough story, with Hugh Laurie playing a well-meaning screw up who unleashes three demons that must be stopped with the help of three ancient heroes: Toggle, Oddsock, and Swoop. Sackboy will come across the requisite NPC's in each chapter but none of them make much of an impression beyond Hugh Laurie's Newton. The main problem with the campaign is that it never seems to go beyond the introductory phase of any of the gameplay elements it introduces. Combined with the fact that each new character only features in a level or two, the campaign ends up feeling only partly finished. It took me 5 hours to complete the main story, which is comparable to previous titles in the series, but because of the overall simplicity of all of the levels I was definitely left wanting.

Perhaps one of the key reasons for the campaign feeling so unfinished is that a number of the creation tutorials have actually been turned into playable levels, which is conceptually magnificent. These levels really hammer in the basics of how to work the pop-it cursor and some of the simpler creation tools. Unfortunately there are only two hours' worth of them and, again, they never really explore the more complex elements of the creation tools. I was actually excited for the prospect of a playable tutorial, based on the logic that it would help me to learn more than just the basics of the series' creation mechanics, but the game never gets to that point. The tutorial levels end up feeling like the main campaign; a good idea that is never fully realised and is instead cut short. 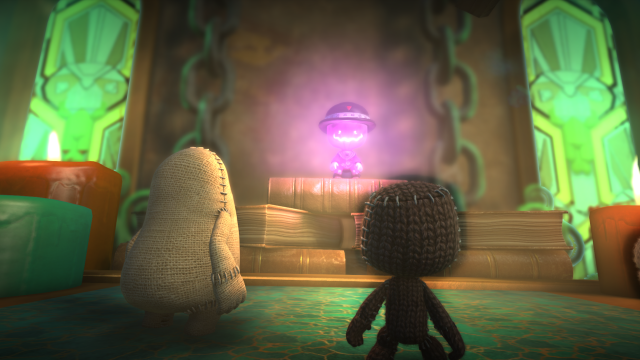 Presentation has always been one of LittleBigPlanet's strong points, and that remains the case for LittleBigPlanet 3. I particularly like how on the PS4 you can tell that the four different characters are actually made of slightly different materials. Unfortunately, the presentation this time is held back in a number of respects, including by incredibly lengthy load times for levels that will have you thinking the game has frozen, and a complete lack of soundtrack gems in this entry. Much more problematic were my attempts at playing LittleBigPlanet 3 online, which was a complete slog. I tried to join another person's game online for 30 minutes and was only successful once. My reward? A laggy, nigh-unplayable mess. My preferred mode of play for LittleBigPlanet has always been offline play and this has only been reinforced by the woeful online functionality for this third iteration.

While LittleBigPlanet 3 doesn't quite live up to the legacy of previous iterations due to a handful of key drawbacks, I still very much enjoyed my time with the game and don't regret my purchase. Given a bit more time in development it could have been a worthy successor in every way. Hopefully if Sumo Digital are given the opportunity to revisit the series in the future they are also given a more lenient deadline so that they can better flesh out the story and tutorial campaigns.