Final pre-order data for Borderlands 2 is in. The game reached 800,000 pre-orders in the USA and around 1.25 million worldwide. Looking at sales by platform at retail the Xbox 360 version takes the largest proportion with 60%, PS3 next with 30% and the PC version accounts for the remaining 10%. 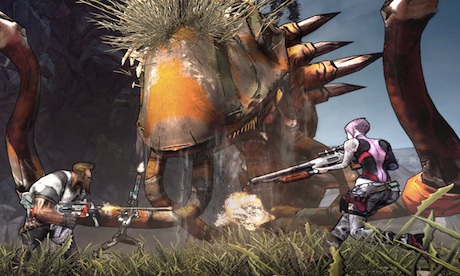 Despite good reviews so far, Borderlands 2 is likely to be a front-loaded game in terms of sales and we estimate that the 1.25m pre-orders will extend to around 1.5 - 1.6m units in week one (5 days of release in North America and 2 days in Europe). This is significantly higher than the original Borderlands which sold around 450,000 units during week one back in 2009. The large increase can be attributed to the long-term success of the original game combined with a strong marketing campaign from 2K which has seen Borderlands 2 set pre-order records for the company.

As a final note, none of these figures include sales on Valve's Steam service which will account for the majority of PC sales and could take the total week one figure above 2m units.

amazing game for sure... 1 was awesome

I can't see why Borderlands 2 would be more frontloaded than other games. RPGs I think tend to have long legs. And if it truly achieves in getting a +90 Meta I think people will feel taken by surprise which usually means many people will buy it down the line rather than during first couple of weeks.

Either way it's looking good and I believe 8 million lifetime between PS3 and X360 is within reach.

I'l get it when its $20. the first one was great but not worth it. it's like giving gameplay a 9 and value a 3.... Fun for a few days to just return it doesn't justify buying it now.
wait till GOTY edition of $20.

Really impressed with how much more hype this game produced and how great the legs on the first were.