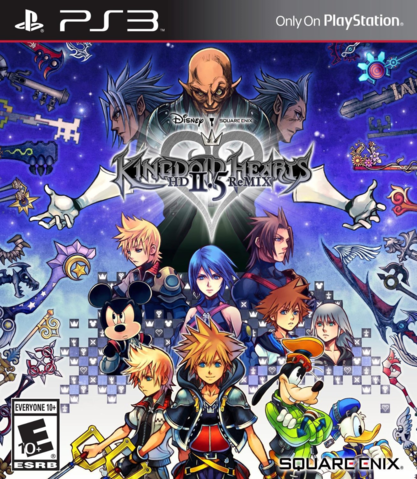 Kingdom Hearts 2.5 HD Remix incorporates two separate games and one theatre mode “game” into a single release: Kingdom Hearts II Final Mix, Kingdom Hearts Birth by Sleep Final Mix and Kingdom Hearts Re:coded. The first two are remasters of the original titles, with upscaled graphics and re-configured controls, while the latter, Re:coded, is a “theatre mode” of the Nintendo DS game of the same name, which means it features all of the story content from the DS title but none of the actual gameplay.

Booting up KHII, the first thing that grabbed my attention was the level of detail in the world and its environment. The HD moniker in the title refers to the fact that the original PS2 game has been upscaled to 1080p resolution, with textures and menus also receiving the upgrade. It isn’t a full remake (like The Legend of Zelda: Ocarina of Time for 3DS, for example, where entire models and dungeons were rebuilt), but rather a repackaging and upscaling of the original product, so one shouldn't expect a revolution in graphical terms, but I really was astonished at how well Square Enix were able to improve things with upscaling, such that characters like Jack Sparrow look amazingly accurate despite the ageing hardware that the models were originally developed on.

Story-wise Kingdom Hearts II largely follows on from its predecessor, with Sora and his pals - Goofy and Donald - having to journey from Disney world to Disney World, restoring them to light after darkness takes them over. There is one major narrative addition (and complication) to KHII, which is of course Organisation XIII. The Organisation blurs the line between good and evil; it makes Sora and his friends question whether what they’re doing is the right thing, and whether they're not actually bringing about their own demise.

Each world you travel to is vivid and evokes memories of the franchise it is based on. The highlight is a world based around The Nightmare Before Christmas, which features personalities like Jack Skellington that are portrayed with incredible accuracy. Unfortunately, most of the worlds you travel to are fairly basic the first time you visit them, with each one merely setting the stage for subsequent events. After about 15 hours of playtime these worlds finally come to life, with truly original stories coming to the fore which superbly compliment the original Disney properties they're based around, giving you a better understanding of how Simba turned out after defeating Scar, for example, or what Aladdin was up to after freeing Genie.

It’s in the combat and core RPG mechanics that Kingdom Hearts II starts to show its age, with story missions lacking guidance (there are no markers on the maps to point you in the right direction) and combat generally becoming far too trivial and repetitive. Whilst these are to some extent simply tropes of the RPG genre, the original Kingdom Hearts managed to freshen things up with open world real-time battles; something that the sequel departs from.

Overall, Kingdom Hearts II offers an enjoyable, albeit far too lengthy and occasionally tedious adventure. As well as the graphics have held up, the gameplay often harks back to a bygone era of gaming packed with too much filler and repetition that will likely only appeal to die-hard series fans.

Finally, there's Kingdom Hearts Re:coded, a title that is included perhaps for the sake of completeness if nothing else. As mentioned earlier on, Re:coded is essentially a compilation of the narrative scenes from the original title, and so consists of roughly three hours' worth of cut scenes but no gameplay. That's quite a lot of narrative to take in, but for those who have become engrossed by the series' storyline but perhaps missed out on this particular entry it will no doubt be welcomed as a value addition to the package.

All in all, Kingdom Hearts 2.5 HD Remix is a worthwhile collection of games (and narrative) that almost demands to be purchased by fans of the series given that it offers such a huge amount of remastered content for a budget price (£24.99 here in the UK). I genuinely enjoyed exploring the upscaled worlds, and found that apart from showing their age in the gameplay department, these particular Kingdom Hearts titles have actually stood up well to the test of time. Given that Kingdom Hearts III has finally been officially announced, 2.5 HD Remix (and 1.5 HD Remix before it) is the perfect opportunity for fans to refresh their memories on the events of the series.

This review is based on a copy of Kingdom Hearts 2.5 HD Remix for the PS3