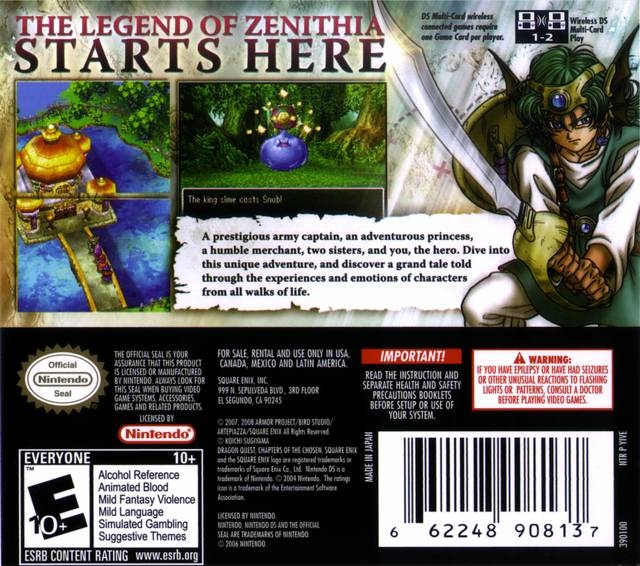 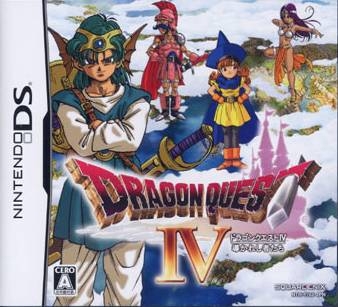 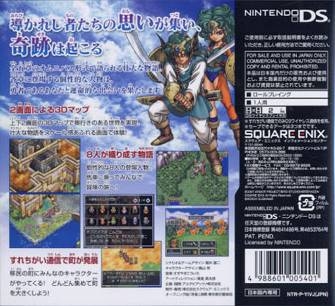 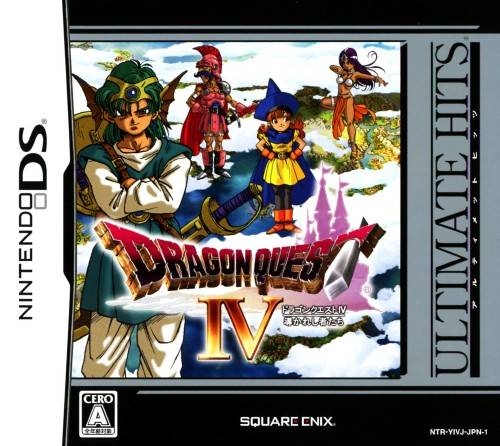 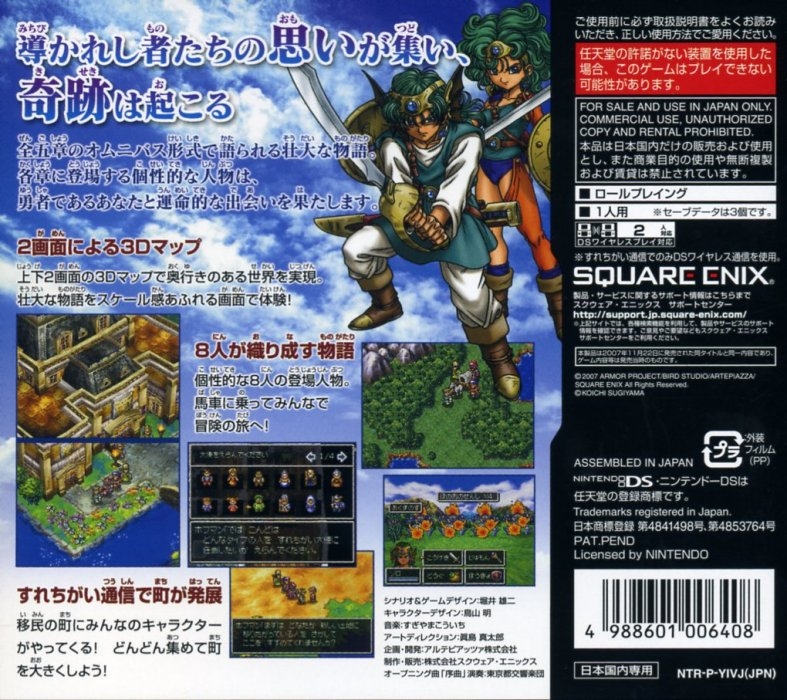 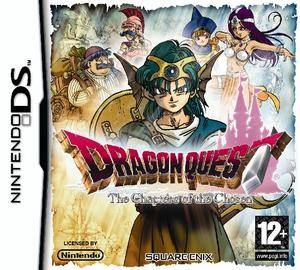 Dragon Quest: The Chapters of the Chosen

Hailed as the biggest gaming series of all time in Japan but not so famous in Europe and the United States, Dragon Quest is making its first appearance on a portable gaming system in the west in form

Before I tell you something about the actual storyline here is one significant point: The game uses a unique way of storytelling – instead of letting you walk through a virtual world with a single person, collecting party members, the game starts with a short prologue (which wasn’t available in the original NES version) and then follows the story of each party member in the form of chapters: There are four chapters in the game just for introducing the members of the party. In chapter one you’ll play as a knight, chapter two focuses on a princess and her retinue looking for adventures, chapter three is about a dealer trying to open his own store and in chapter four you’ll follow the story of two sisters on the way to avenge the death of their father. In chapter five you’ll finally start with the real quest, begin your journey and save the world from evil.

This kind of storytelling helps you to understand the motives of each character much better and gives you a great introduction to the battle system as each group of characters has their own fighting style. Additionally, each chapter really has some kind of its own style. Different parts of the gaming world speak in different “languages”: While some people will talk to you in every-day English, others speak with French or Russian accents, which help to give you a feeling of being in the game. The story in general is rather classic. As you’d expect from a game that originally appeared on the SNES, there’s nothing to drool about by today’s standards. Still, the story offers some nice twists and tweaks and is quite enjoyable.

Being a port from the PSX version of the game the graphics are far better than in the original NES version. Vibrant colours, characters designed by Akira Toriyama and some 3D effects if you press L or R buttons: the game looks decent with its Anime–like art style, although some towns look quite similar to each other and you could have some problems remembering each town just by its name (that happened to me: at one point in the game I was stuck just because I couldn’t remember the name of one town and thus had to warp over and over again until I had found it). If you like Dragonball or other mangas by Toriyama you will also like Dragon Quest' s style. Just don’t expect to be blown away by the graphics.

The sound consists mostly of classical Dragon Quest themes. A nice over world theme and different battle music definitely help to improve the tension. You’ll listen to middle age – like music in castles and typical casino melodies in… well, casinos. The sound quality is good, although it consists solely of midis (computer based sounds) and fits the fantasy theme of the game quite well. Again, if you do not expect to be blown away you will definitely like the sound of the game and find it quite enjoyable.

Dragon Quest is a classic RPG in its traditional form: Fights are turn based and you can choose between attack, magic, items and defend. There are dozens of different spells, although modern RPG games feature a wider range of magic. Combat is special in the way it presents the battle to you: In Dragon Quest you see the fights from a 1st person perspective, enemies are visible on Touchscreen, while your stats will appear on the upper screen. What makes the game somewhat unique is the number of characters you can control. Unlike some RPG classics like Final Fantasy VII, your party can consist of up to 10 members you can switch during battles in groups of four to get the formation you want. Each mix has its own weaknesses and strengths which helps you to fit the style you prefer. This way you can decide on your own how much damage you are able to make in one turn and if your active party is focused on strength or magic. Skills are represented by health (HP), magic (MP), attack, strength, defence, speed, luck, intelligence and stamina. Items help you to improve your stats.


Some characters have special play styles, they will randomly collect more energy for a critical hit or tell your enemy bad jokes to bore them to sleep (yes, really). While your basic party will consist of about 8 members, towards the end there are other characters in the game that will only help you with your quest for a small amount of time. Those characters are mostly played by the computer, although the characters you played from chapter one to four can be controlled by you if you wish to. There is also the possibility of giving them certain tactics like healing, attacking or defending. Most of you will prefer the possibility of controlling them directly by yourself, though, so there is no need to go into detail here.

All in all the game (including an additional chapter 6 with a different ending) took me about 30 hours to finish and most of you should need 25 to 35 hours as well. There are not many side quests besides the famous mini medals (although they are not comparable to Heart Pieces in Zelda, for instance: You’ll just get items for them, most of which can be found in the game as well) and “Boom Town”, a city you have to find citizens for to make it grow big (but you will actually need to grow Boom Town to finish Chapter 6, so that isn’t really a side quest, either).

The game can be difficult at times if you try to attack without thinking but isn’t too hard to beat when you use some actual tactics. Sometimes just a small number of level ups decides whether a boss fight ends in a tragic defeat or a glorious victory for you and most often you should just come back after you have levelled up your party by 3 or 4 levels.

If you want to avoid mild spoilers head to the next paragraph, but I absolutely have to tell you that *mild spoilers* the last boss fight in chapter five was one of the closest calls ever for me in a videogame. I had lost all but one of my party members in the end, had 0 MP left, exactly 11 health points (for your interest, this particular character had a maximum of over 400 health points for me at this point) and the boss was able to give me damage as high as 150 points for each character in a single turn. I already wanted to turn off my DS and start the fight all over again when I thought : “Well why not die in honour?” and tapped the “attack” button… and actually won. I am still not sure if I should be proud or ashamed by this lucky victory but I thought I should mention it. *spoilers end*

So here it is. The first Dragon Quest for a Nintendo handheld in the western hemisphere. Is it fun? Definitely! Is it an epic step forward for handheld RPG games? I wouldn’t say so but hey, this is a port of a more than 10 year old game, so we shouldn’t expect it to be either. All in all Dragon Quest IV: Chapters of the Chosen was for me what I had hoped for: A good, classical RPG with nice character design and (for its time) a decent story. If you are looking for the next AAA game on Nintendo's Dual Screen you will be disappointed but if you are looking for a good old school RPG and – most importantly – a good way to start your experience with the Dragon Quest universe, you should definitely give this game a try. In the end you should see this game as what it is: A herald of one of the biggest RPG games of this generation - Dragon Quest IX. And if you see it as that you will definitely be looking forward to the next Dragon Quest game. Give this series a try. You won’t be disappointed. But always remember: This is just a small foretaste of what is still left in the Square Enix pipeline, and I am really looking forward to it now.

Thanks to Square Enix and Koch Media for supporting us with the Reviewers Copy!