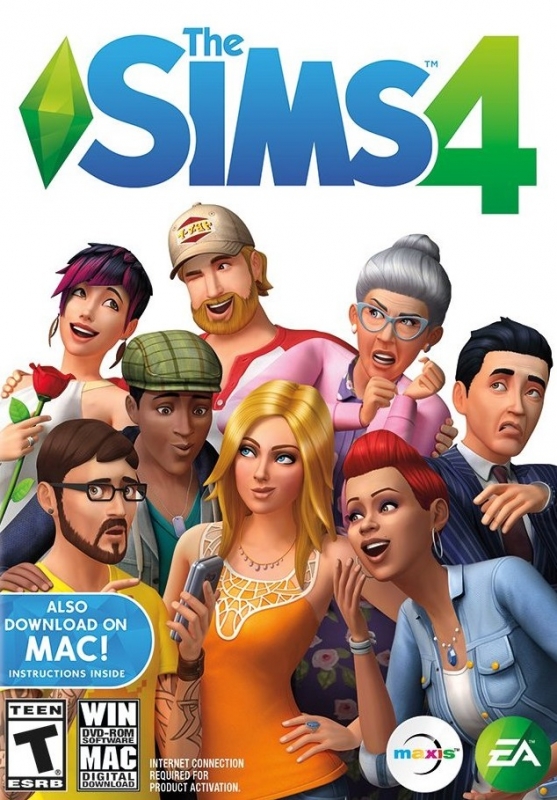 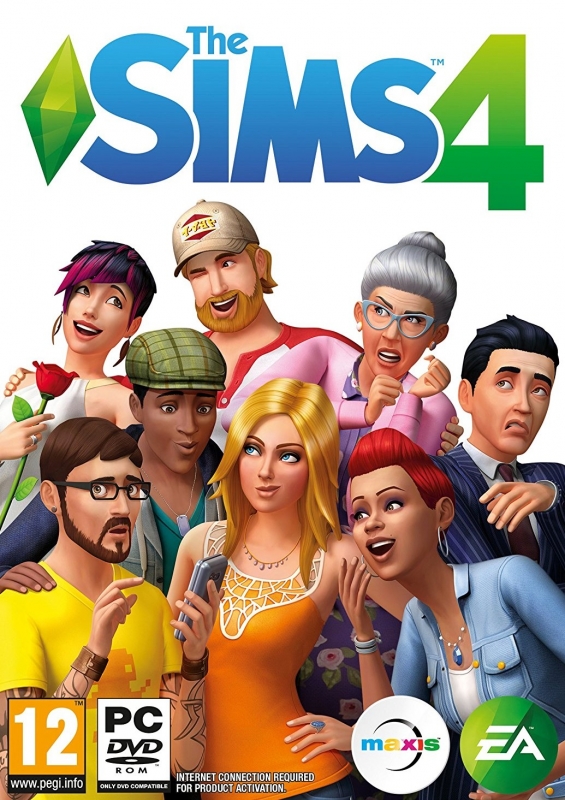 Dan takes a look at EA's latest in its long line of Sims games, The Sims 4
Already having three successful mainline entries in a blockbuster franchise like The Sims under your belt must make approaching the next entry a daunting prospect. On top of coming up with fairly typical incremental improvements you're also likely tasked with needing to re-invent the series. The pressure must be immense. Unfortunately, having played over ten hours with one character in The Sims 4 and then experimenting with different families and additional characters, I can confirm my fears - The Sims 4 is in no way better than The Sims 3, and is in fact a step backwards for the series. If this game had been released just after The Sims 2 it would've been great, but times (and expectations) have changed, and so too have EA, who in The Sims 4 have held back and seemingly sabotaged their own title. 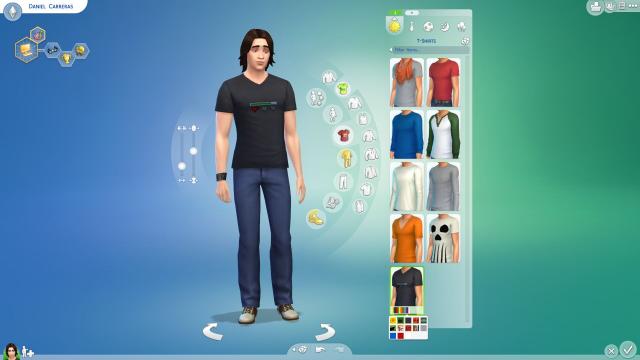 Things start off in standard Sims fashion, with the game prompting you to play around with the new character creation system. The new tools, I must say, are a delight to use; there are no cumbersome sliders or menus to click through, you merely click and grab the part of the Sim that you wish to change and start making your desired alterations. Jawline not the right height? Just drag it into your desired position. Belly looking a little too fat? Just rotate your sim and drag their belly inwards. It's a breeze, and happens to be one of the best improvements in the whole game. I can easily envision millions of gamers creating and sharing families of Sims that closely mirror their real-life counterparts, using the family sharing features EA have incorporated into the game to easily share their creations with one another. This aspect of the game isn’t too dissimilar to The Sims 3’s online sharing system, but it's a little more streamlined and easier get to the families and popular Sims you want.

Upon creating my perfect Sim (it’s just like me and even boasts all of my traits) it was time to put him into a lovely home. The game provided me with $20,000 simoleons to get me started, which is used to purchase a starter house. The house was unfurnished, which allowed me to set about decorating it and checking out all the new items, as well as the 'new and improved' building mode. The new build mode does away with a user having to search through individual items. Instead, users can either perform a general search for the item they’d like to buy (searching 'computers', for example, will bring up everything related to the term computers), or can look for an item based on a variety of categories, such as by room type, or whether the item fits a certain descriptor (such as 'comfortable', for example). The intention is to make the experience easier for end users, allowing you to create your dream sim life as quickly as possible. It doesn't, however, account for cultural linguistic differences, so those of you who use British English may come to have a few gripes with the search system. 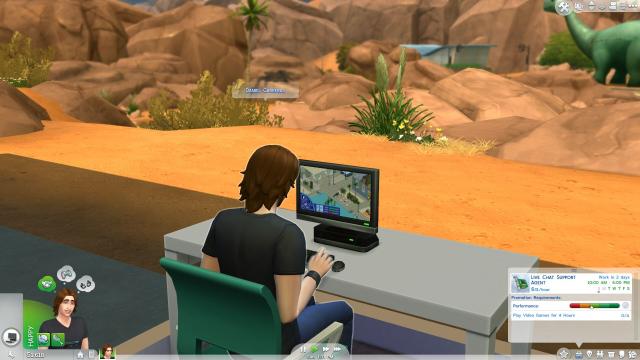 House building has been overhauled too, with The Sims 4 giving players the ability to buy entire pre-built rooms and just plonk them into their homes, making it faster and easier for those who prefer simply making the sims live their lives to do so. Unfortunately the inclusion of this system seems to have come at a cost - you're now much more limited in the number and types of items you can build. For example, as was widely reported prior to release, the developers have taken out the ability to build swimming pools entirely. I personally didn’t come to mind the lack of swimming pools myself, but those Sims fans that love to build lavish and fantastic houses will no doubt be angered by their removal. There’s a lot of room for improvement in this aspect of the game, to say the least, and this is reflected in the score I've given the game, but there’s no doubt that EA will add countless content packs to the game in the weeks and months ahead which will allow you to open the currently barren world up and truly make it what you want.

The way you interact with your Sim(s) hasn’t changed too much; they're quite autonomous until you specifically click on an item and have your Sim interact with said item. I usually found myself getting into a routine of making sure 'Daniel' was plenty fed and washed before playing games all day and programming without worry about him moaning. The autonomy is so omnipresent that it’s now hidden away in a sub-menu in the bottom right of the screen, and the bottom left is now taken up by your Sim’s face and current mood. This mood is dynamic, and can change at any given moment depending on what the Sim is doing. When I had Daniel ponder chess moves at a chess board, he would become focused and would even work better later on, or if Daniel is in a conversation with someone and decides to bring up a topic which doesn’t go over too well he’ll become embarrassed and will want to get away through fear that his stats will go down and he’ll lose friends. It’s a nice system, but one that constantly made me feel like I wasn’t actually doing anything in the game; it's almost as if the player has become a casual, almost neutral observer who will occasionally push their Sims in a certain direction.

Some of the traits that you pick for your Sims at the start of the game can also prove problematic later on. My intention was to build a Sim who was a loner by personality trait - one that was more than happy to be alone throughout the day and was content with just playing games and programming. The problem is, EA are quite adamant that your Sim must have social interactions, meaning Daniel was always sad as he hadn’t spoken to anyone even though he was supposedly a loner. It seems strange that your Sim's traits can be the opposite of your stats, and stranger still that you must always adhere to these stat bars for fear of making your Sim unhappy. Eventually, I had to cave in, and went about ordering Daniel out to bars and clubs to ensure he got out and met new people. Whilst at the bars, however, he would become bored or sad due to his loner trait, which meant that he didn't like being around strangers. 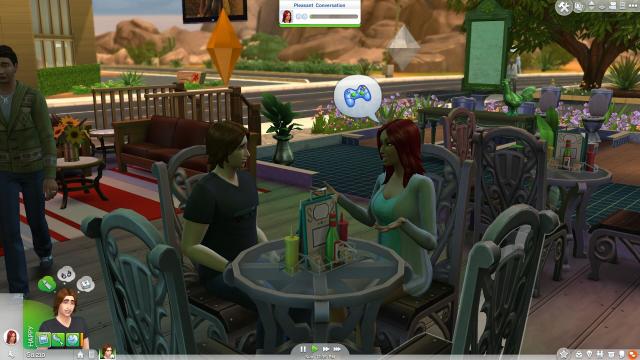 The town itself now a strange mix of cul-de-sacs, rather than a single open place you can explore. This feels like a backwards step when compared to the freedom granted in The Sims 3. When travelling you have to select one small location and travel to it, which in turn brings up a loading screen that leaves you waiting for a while before the game opens a new house or building. These building designs themselves are fine - there's a small amount of variation between the two locations you can choose from - but all of the designs feel very plain; The Sims 4 is simply screaming out loud for an expansion to add the fun factor into locales.

Graphically, The Sims 4 is average-looking at best. In some series such statements can easily come about as a result of diminishing returns, but in The Sims 4’s case such an argument doesn't feel applicable; there's only a small difference between The Sims 4 and its immediate predecessor. The most noticeable change in the look of the game is the result of aesthetic choices rather than technical graphical improvements. It all really begs the question of whether a direct sequel was actually needed, rather than simply another expansion, as very little has been overhauled outside of the social features and new sim creation system. 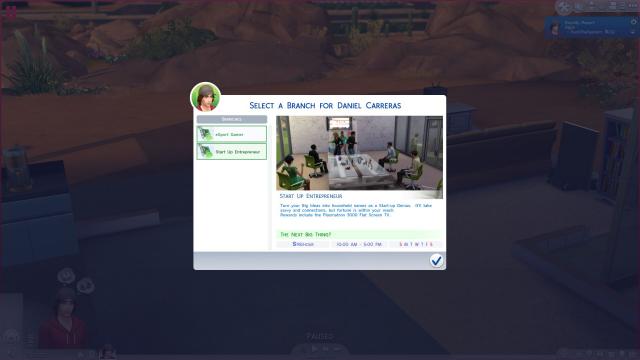 That's the key problem with The Sims 4 - it's a decent game, but one that fails to provide a reason for its very existence. The graphical staleness that is presented as an update, slight overhaul to building mode, and new sim creation system don’t make up for the wholesale removal of content and features that are now expected to be mainstays of the series (most notably a completely open world map, numerous customisation options for building mode and creating sims, pools, toddlers, and more besides). If it were a new IP, this would be a perfectly good and fun game in its own right, but given what came before it and the reasonable expectations fans therefore have as a result, The Sims 4 as it exists at launch is very much a disappointment.

This review is based on a digital copy of The Sims 4 for the , provided by the publisher.