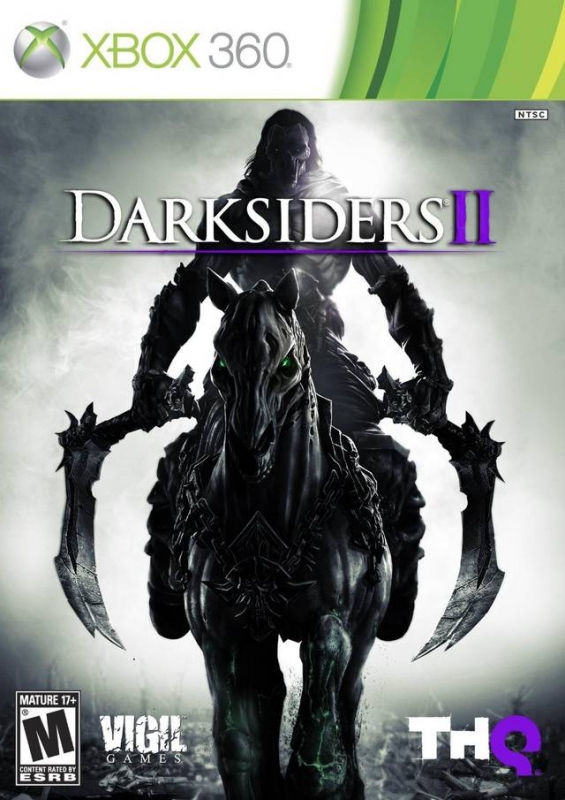 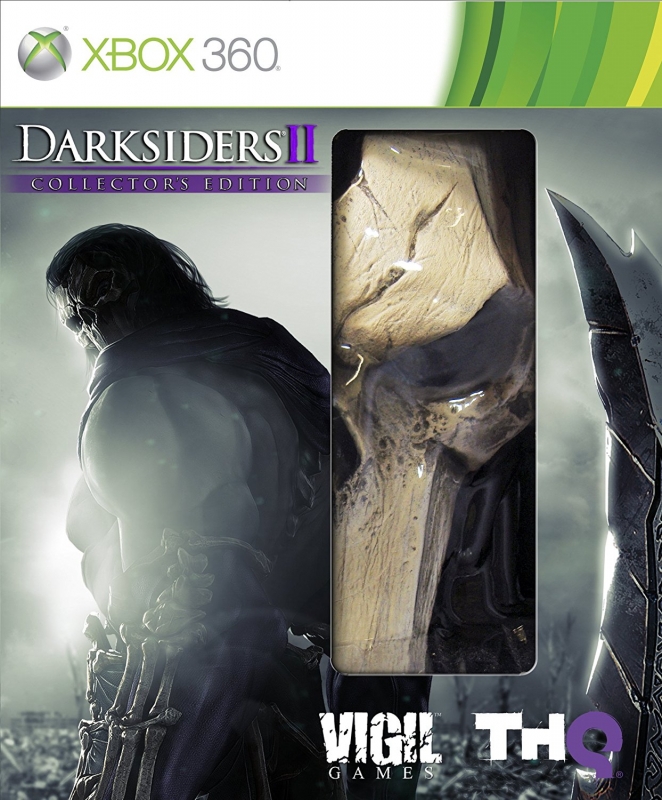 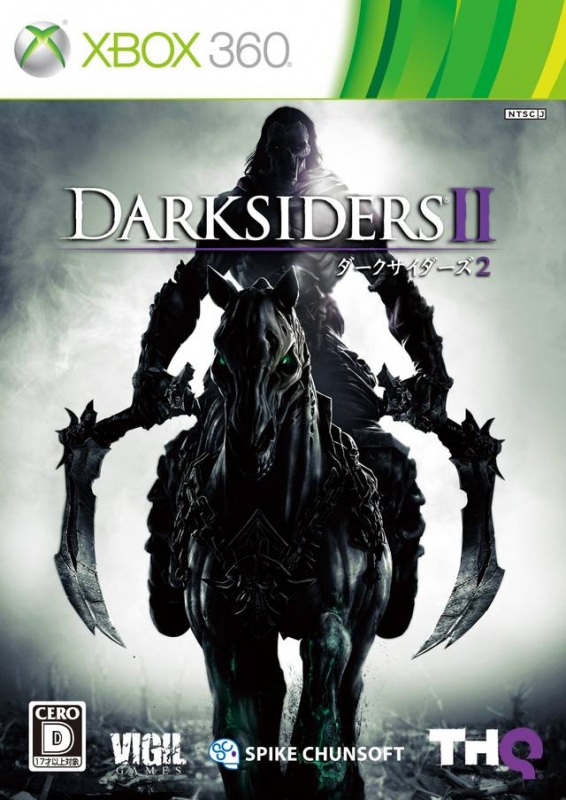 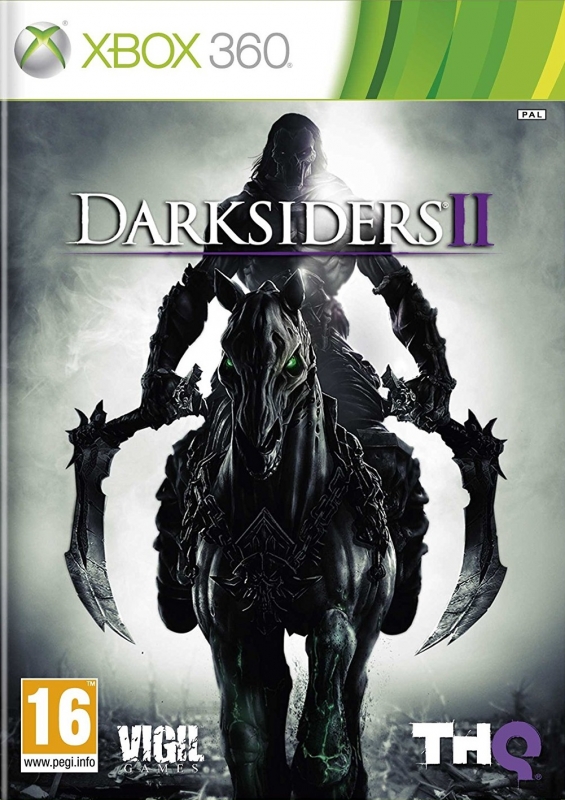 Death is the breath of life this franchise needs.

It's been a tough year for the guys at THQ, with many cancelled projects and some unfortunate layoffs. Despite it all, Vigil Games' sequel to their 2010 hit Darksiders has powered on, and is finally heading to a store near you. The first game was always known for combining concepts of other popular games, and the second continues that tradition. In addition to Zelda and God of War roots, you'll find some Diablo, Prince of Persia, and even a little Portal mixed in this time around. The question is, will Darksiders II be a beacon of quality and commercial success for THQ to rally behind, or the company's last hurrah? The good news is it's got the quality part down, for the most part.

If you were hoping for a continuation from the cliffhanger ending of Darksiders, you're going to be sorely disappointed. Darksiders II follows Death through events parallel, and largely unrelated, to those of his brother War in the first game. Death is trying to redeem War by reviving the humans killed in the apocalypse, and through it must confront the demons of his past and the dark threat known as Corruption. The world is even richer than that found in the original game. Darksiders II takes you through far more of the universe than the first game, which was largely focused on Earth. The story itself is serviceable, but fails to impress. That said, the rich, living universe and lore are enough to make everything around you interesting. You could play Darksiders II without playing the first game, but some of the terminology and setting nuances would be lost on you.

When you hop into the world its breadth is immediately apparent. The game takes place across two main "adventure fields," both of which are fairly large and have a variety of main and side dungeons and hidden secrets. There are also two smaller areas, but these are much more linear and only feature one main dungeon apiece. The optional dungeons can be interesting to explore, but many of their secrets will remain hidden to you until near the end of the game, when you have the tools to access locked-off portions. This can make exploring early in the game a bit disheartening. There also isn't really any side content outside of extra dungeons. The world itself is large, but mostly empty. There is the occasional chest or collectible in a corner, but much of the world is linear empty paths between content-filled dungeons.

Of course, the meat of the game is in its multiple gameplay systems. Darksiders had a reputation of being borrower more than an innovator, and the sequel maintains that tradition. Starting with the combat, while the first game had the weight and impact of God of War, Death fights a bit differently. While the basics of the combat are familiar, Death relies heavily on dodging and agility, more similar to the Devil May Cry series. You'll still have a main weapon (scythes) and a sub weapon (hammer, axe, claws, etc.). You'll also still attack by mixing the X and Y buttons together in various weapon-related combos while also using abilities.

While all that sounds familiar, there are plenty of differences. Instead of preset abilities, Death acquires his by spending skill points as he levels. Yes, Darksiders II has added RPG elements. As you level you'll put points into one of two skill trees: Harbinger and Necromancer. Harbinger abilities focus on physical strikes, while Necromancer is more the "caster" route. There are only a few actual abilities in each tree. The rest of the skills are just enhancements to those core actions. Unfortunately, you'll need almost all of the abilities related to a skill before it starts to feel even remotely effective in combat. This is especially true of the Necromancer tree, whose skills take a lot of investment to mature into truly helpful attacks. That said, the combination of a faster battle system and customizable characters makes Darksiders II a large improvement over the first on the combat front.

Another RPG concept is on show in this sequel: loot. Death can find and equip items in 7 equipment slots (including two weapon slots). Items follow a fairly standard RPG practice of being colored white, green, blue, and purple in increasing order of rarity. There are also orange items which are unique, and generally dropped by bosses or offered as quest rewards. While there are tons of items in the game, there aren't a whole lot of unique models for those items. Death will probably only wear 5 or 6 different styles in any one armor slot, despite going through dozens of pieces of equipment. That said, the armor looks good, and it's always nice to equip some new pick up and find it looks very cool.

Among the returning features from the original game is a familiar Zelda-inspired dungeon design. Dungeons are filled with puzzles and enemies, and culminate in a large boss, often with a puzzle mechanic of its own. Unfortunately, unlike Zelda, the item variety isn't the best, and many of the dungeons, especially for the first half of the game, have puzzles that feel simple and uninspired. These usually involve activating switches through rolling balls or explosives, and don't evolve past that much until well past the halfway point. As new abilities are obtained the puzzles get more complex and more interesting. Later in the game you'll be able to split your character in two to operate multiple objects, and create and jump through portals at designated spots. There's even a time traveling mechanic in one dungeon (in case it wasn't enough like Zelda). These can be a lot of fun, but it would be nice if the early puzzles had been closer in quality to the later.

There is an expanded focus on platforming, which gives the dungeons a bit of a Prince of Persia feel. Death runs along walls and swings from grapple points. These acrobatic feats are a frequent part of Death's dungeon traversal, but are ultimately less-than-satisfying. The problem is that there is no actual challenge to them. You have plenty of time to react to any change in a platforming sequence and movement through them happens almost automatically, with just a few simple button presses in-between runs. Compounding the issue is the fact that there is no penalty if you do happen to fail a sequence. The result is platforming that's much more like Prince of Persia 2008 (or even easier) than Sands of Time.

Collectibles are a huge part of the design as well. Vulgrim will have you collecting pages of the Book of the Dead to assemble into chapters and sell to him for big rewards. Boatman Coins can also be found and traded to Vulgrim for random items. Many side-quests will send you to find or collect items as well. Fortunately the game has lots of side-quests, and almost all of them are worth doing. Some of the best boss encounters in the game come from one of the side-quests, and completionists will have no trouble scratching that itch.

On the technical side, Darksiders II is not graphically impressive. Luckily, good art direction helps make up for it. It's also nice that the game doesn't use CGI for cutscenes, instead electing to stick with the in-game engine. There is a great variety in the world Death explores. From the Nordic-style Forge Lands to the dreary and dark Underworld, the variety in visual style keeps Darksiders II fresh. This makes for a very pleasant visual experience overall, but on the downside combat is often so busy with visual effects and enemies on-screen that it can be frustrating to figure out what's going on and read visual cues from enemies in time to dodge them. There's also a noticeable lack fo detail when you get close to anything. Audio also fares very well. The voice acting and music are very good. Though some of the music is less than memorable, it always feels appropriate for the game.

There are also a number of bugs that impact the presentation. Audio desyncronized quite often when I used the audio sliders. Voice acting would drop down to being ridiculously quiet on occasion, and sometimes voices would drop out altogether. At one point an entire cutscene conversation glitched out, causing me to only see Death's side of the discussion. Other major bugs hit regularly, including glitches which would prevent events from triggering. On two occasions the game prevented me from advancing. Once was after a boss fight, when the boss simply froze in place, forcing me to reboot, and another was when the game itself froze, again forcing me to reboot. Both occasions cost me progress. There are also some framerate drops throughout the game, but these are generally tolerable.

If you're looking for bang for your buck, it's hard to go wrong with Darksiders II. The main campaign will run you 15-20 hours depending on how quick/skilled you are, but there are another 10 hours that can be spent doing side-quests and hunting for collectibles. You can also challenge the Crucible, a 100 floor gauntlet of enemies, for in-game awards, achievements and an avatar item. Leaderboards are present, showing stats like largest combo and highest critical hit. Furthermore you'll have access to New Game+ as soon as you complete the campaign, giving you a replay with all your equipment and abilities. It's great value for an action game, especially in an age where $60 often buys you less than 10 hours of play.

Darksiders II is an easy recommendation for most gamers. There are a number of noticeable missteps; the platforming just isn't fun, the overworld is pretty empty, the dungeon puzzles take a while to become interesting, and technical issues are frequent. Despite these issues, Darksiders II is a meaty and enjoyable game and a worthy sequel to the first. If you're looking for a big release to tide you over until the holiday glut, look no further. THQ has a winner on their hands.

This review is based on an Xbox 360 copy of Darksiders II, provided by the publisher.