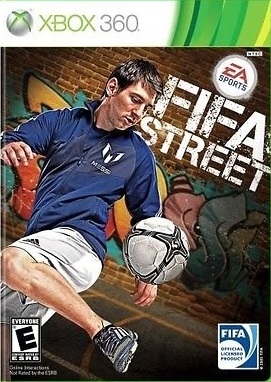 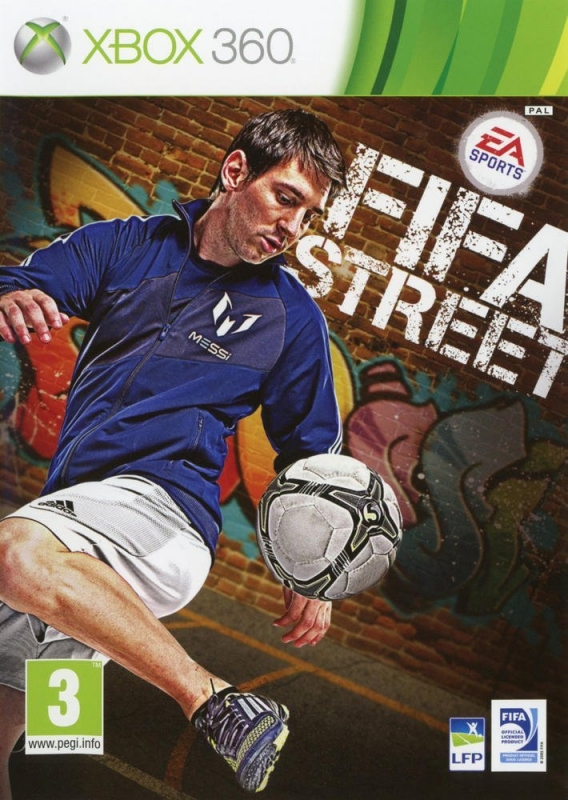 Quality Street or a Messi Outing?

FIFA Street, it is probably fair to suggest, does not fancy itself as the English N-Power League Two of football games. Possessing all the grit of an out-of-factory Ferrari, this footballing experience is all about how much bang you can get for your buck. Feints, dribbles, Cryuff-turns, Messi-wessi-decimal-triple-step-float-traps and the like are the order of the day, all accompanied by dubstep beats and an attitude problem. FIFA Street is definitely one for the show-offs, the fan-Dans of the hallowed turf, but can it really stand up as a self-respecting football title?

On paper, and off the menu screen, there is plenty to do here. 'Hit the Streets' is your exhibition mode, offering the opportunity to try your hand with a top-league club (no chance of Leyton Orient here) in a variety of different scenarios. The range of match-types is impressive; one can choose from 5-a-side, 6-a-side, last man standing (lose a man for every goal scored) and free-style, among others. The best, and most considered, is Futsal, the popular South American game where skill is mixed with tactical nous. Here, old FIFA hands can drag and move a team like they can on the traditional incarnation, unlike the more restricted and chaotic small pitch options. The online mode, like that of FIFA 12, is quality, with the excellent league and cup modes bridging the divide well. There is little lag, and most of the big team game types are available to use. Any points or glories earned are shared with a cross-account from FIFA 12, resulting in a sense of continuation and harmony with its bigger brother.

These game types are extended further in the career mode, where you take a bunch of prodigious street players (or 'show ponies') and turn them into world stars. It starts off quite cute, receiving texts from your captain and working up through local leagues (the Blackpool slum was a highlight of my North West England tour), picking up players and improving those you already have. Quickly, however, it becomes tedious and rather unrewarding. Matches against the same players soon become repetitive, whilst victories are rewarded with garments of clothing. Seriously. Show your skills and you're rewarded with socks, like some superficial Grandmother at Christmas. I hope Nike gave EA some serious funding for the product placement, because at times the game resembles more a fashion parade - a 'let's dress Messi' experience - than a football game.

This, in-fact, is a major problem with FIFA Street; at its heart, if it has one, it is a very shallow, superficial experience, and is a pretty damning indictment of the vacuous attitude many take towards modern football. FIFA Street is a game for individuals; gone is any resemblance of team play or spirit, replaced by posturing, show-boating and... nothing. There seems to be little real substance to the experience; beyond the tricks, the bling and the in-your-face attitude, what holds it together appears to just be a poorly structured football game. After the magnificent FIFA 12, arguably the best football game ever, FIFA Street is a massive, massive comedown.

The previously mentioned individualism has worked its way into the game design and the mechanics of the play itself. There is little reason for the opposition to actually be on the pitch, except to play the fool for a prancing trickster; a point exemplified by the appalling defensive system. EA appear to have gone out of the way to make it as difficult as possible to stop an opposing player; all too easily your 'stoppers' are just waltzed around as you lunge at thin air, or jockey a player ineffectually as he just strolls past you. Gone are the well-timed slides, the tactical artistry of a well organised unit or the sneaky pull-backs of an artful dodger. Instead, you may as well pull up a chair, get out a cigar, and just clap little man, clap. That's all EA wants you, as a defender, to do. What makes it all the more annoying is that it is these elements, as much as any trick, which really make street football. Every player knows that a quality defender is more likely to win a match than any decent attacker, whilst fouls are the order of the day; anybody who has played a 5-a-side game can tell you that for the most part it is thugs trying to mince people against the boards with very little semblance of skill anywhere to be seen. In ignoring these vital elements EA have ruined any sense of authenticity, as well as any semblance of balance that might have made for a better playing experience.

At times, however, there is no doubt it can be fun; doing an opponent, even better a mate, is satisfying, especially when a trick pulls off. The controls are intricate and require perseverance; akin to a fighting game, it is a case of practising combos until you know them well enough to use them with confidence. Often manoeuvres appear overly-complicated; you think you are doing one trick before your player spins off into an entirely different direction, ruining the flow of your attack. A tutorial mode attempts to help, but it fails to replicate the velocity of the in-game action. Things become easier against a human opponent, although that may be because they are equally hampered by the shoddy defending. Shooting is haphazard, and even the best players are as capable of missing from a yard as they are at scoring from their own half. Passing, on the other hand, is unerring; it takes a mistake of biblical proportions for a pass not to slot straight into the feet of your teammate. Goalkeepers are often the best players on the pitch, pulling off miracle saves which border on the ridiculous. For all that, for the most part FIFA Street is an idiot's game, and requires little-to-no thought process to play; like real street football, the best tactic is to just hit it down the middle for your striker to tap-in. No nonsense, easy success.

Inconsistencies like this plague FIFA Street; does it want to be an ultra-realistic version of street football, or an over-the-top thrill seek? Is it truly a stand-alone title or simply a bright, limited FIFA 12? Does it want players to have fun, or does it want players to make fun of others? Is it possible to gain any satisfaction from the attacking when the defending is so awful? In many ways it is a return to the bad old days of FIFA, when a match was simply a succession of pre-set animations and possession is decided by the luck of the clash. These were painful times, and ones which it appeared, until now, EA were well behind.

Such inconsistency belies itself in the overall presentation. Flash but somewhat hollow, the 'street-like' graphical style is akin to a movie set; there is dirt, but it is plastered with a sheen that makes it appear entirely fake. There is too much of this sheen for it to be characterful, yet slightly too grubby to be pretty. The arenas, the street ones especially, border on the insulting; the 'Aberdeen Cage'? C'mon, it's Aberdeen, not a prison island. Again, this would be fine if it had an arcade-like demeanour, but it does not; it takes itself too seriously for it not to be likewise judged with a poker face. Players move well, but the pre-set animations mean that any fluidity is hard to muster, whilst some of the likenesses are pretty horrific; the Zlatan Ibrahimovic monstrosity will give me nightmares for days. The music is fully licensed, as you would expect from EA, but there is little variety away from some pretty vapid grime and dubstep numbers, which quickly become tiresome; the lack of commentary, understandable but noticeable, accelerates the grind of the tunes.

Perhaps the real problem when considering FIFA Street is that, realistically, it could easily have been included as an expansion pack for the more polished FIFA 12. This would have been fine; even at £10, say, it could have been a justifiable and fun expense, with any faults laid aside by its add-on status. Consider the awesome indoor pitches of FIFA 98 for an example of what it could have been. Instead, what we have is a full-price game which just doesn't really have enough to hold it all together as a coherent experience; the career mode becomes tiresome quickly, whilst most games descend into nothing more than animations clashing into each other. This is a shame, as there is potential on show here, but it is so lost in its own self-important shallow charade that any goodwill is quickly diminished by frustration and disillusionment. What could have been light-hearted fun is instead an over-competitive and complicated headache, akin to being smashed against the boards at a park in Bolton over and over again, like real street football. If this is the way the game is heading then give me a pie, Bovril and Rochdale vs Doncaster any day; at least I know what I will be getting from my football.

This review is based on an Xbox 360 copy of FIFA Street, provided by the publisher.