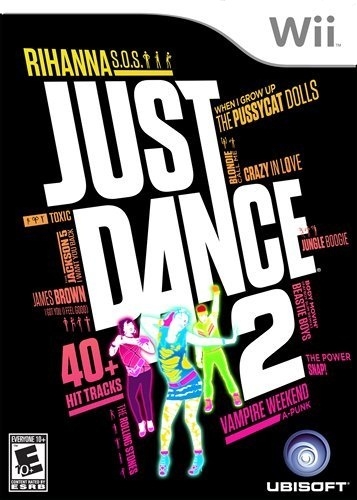 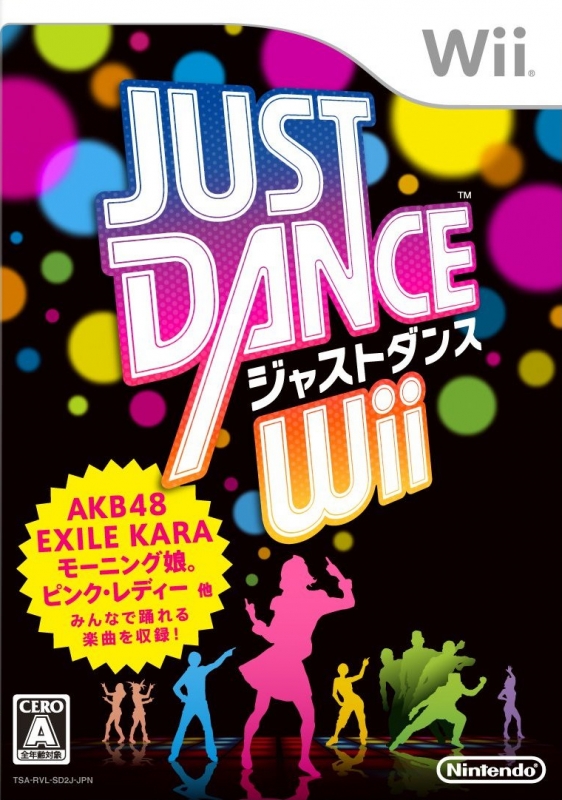 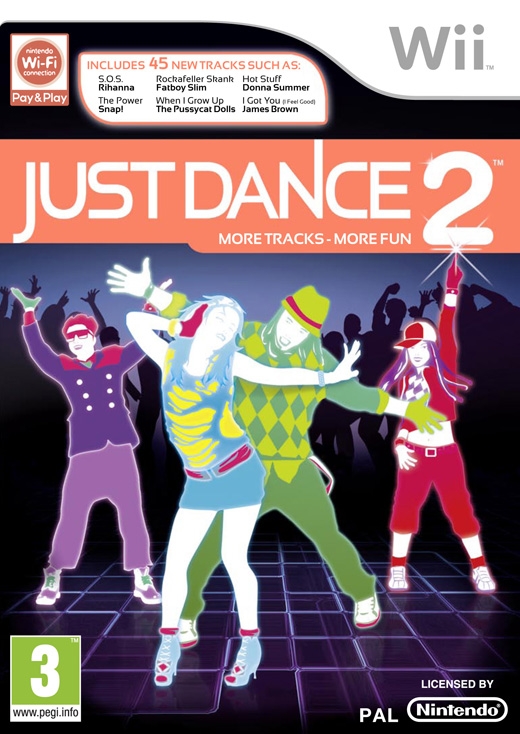 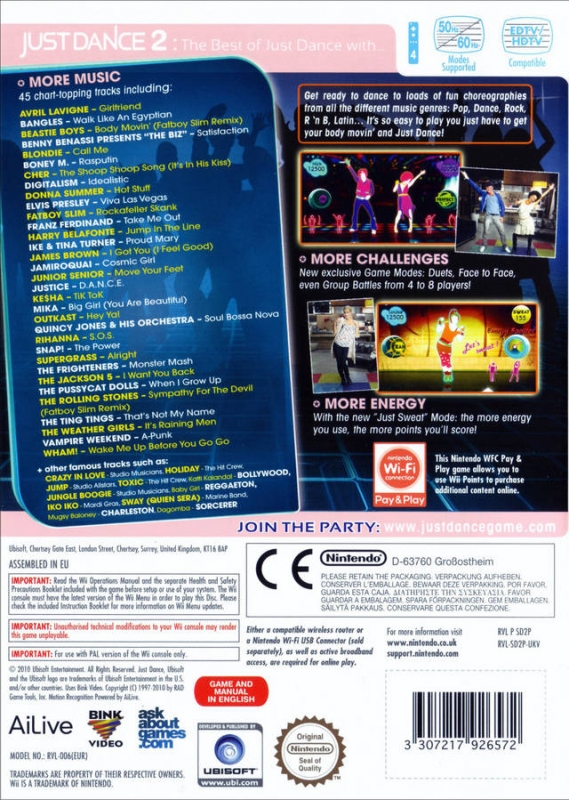 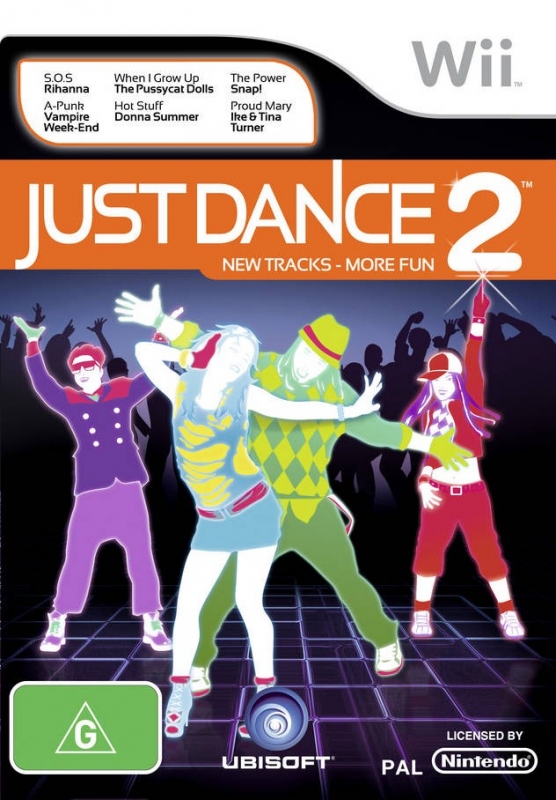 Just dance the night away.

Last year Ubisoft dropped a bomb on us in the form of the original Just Dance, a game so simple yet so, so fun. All you did was dance, there was no rhyme or reason to it, you just did it and it was a blast. Now the game wasn’t perfect, heck it was far from perfect, the controls weren’t responsive, the graphics we’re… shocking and once you had enjoyed all the tracks that was it, nothing more to see here, but it was still fun, a rare example of a game being better than the sum of it’s parts. Well we’re all a year older now, so has Ubisoft fixed these issues and delivered the ultimate dance experience or should you just stop dancing?

As the titles implies Just Dance 2 is all about dancing. You follow both an on screen character and the scrolling moves at the bottom of the screen in order to dance the right moves. In an attempt the shake things up, the developers included three new modes; Dance Battle, Just Sweat and Duets on top of the classic Just Dance mode. In Dance Battle you (and up to eight) other friends go head to head in a team dance off. Just Sweat is an exercise mode that counts how much ‘energy’ you use dancing and encourages you to dance harder to burn off some calories. Duets, by far the best new addition to the game allows you (and again up to eight) other people to dance the same track but with complementing moves.The game’s controls are immensely simple. All you have to do is hold the Wii Remote and follow the on-screen action. Now while this works well in principle this game would have benefited so much from Wii Motion Plus support as most gestures the game just guesses what you actually do, often times you can get a perfect score by just shaking the Wii Remote violently. That being said theirs a great deal of fun to be had in Just Dance’s simplicity and those we choose to play the game the way Ubisoft intended you to will have a blast.

The dances themselves are all fun to play. Every song in the game offers a different way to play and you will rarely find yourself doing the same moves twice. Often times, especially in duets, you will have to do a ‘power move’ to earn more points. Successfully pulling off these moves can be the difference in finishing with a high score or losing the dance off. I should also point out that Just Dance 2 is an excellent family party game; if you ever need to throw a birthday party for young children then this is the game to pull out. Not only will they have a blast but by the end they will be so tired that they will be quiet for the rest of the evening, win-win.The biggest drawback however is that Just Dance 2 is almost purely a multiplayer experience. Sure, you can dance solo but by going it alone you are losing out on the best aspect of the game, the social experience. It really is something else to get a bunch of people together dancing together and with Just Dance 2’s eight-player dance floor, you will never run out of hilarious good times while playing this game.

The graphics have not really changed in the past year; the entire game is presented in a glitzy and colourful art style that while attractive can rapidly become overwhelming. One thing that the developers did change was give every song a ‘context’, so if a particular song is jungle themed you will be dancing with a tribesman in the Amazon or with a robot to the more techno-inspired tracks, etc. The menus are also clean, vibrant and easily navigated which speaks to the games casual appeal but theirs a real lack of depth and variety here for someone looking for a more meaningful dancing experience.The audio for this game is remarkably well done. All the songs come out clear and crisp and the quality is surprisingly high for a Wii game, so even if your playing the game through your standard TV speakers or a full surround sound system the experience will generally remain the same. Even the lyrics don’t get lost in the background as much as they did in the original Just Dance.

Of course, for any music game, the real sticking point is the song selection and Just Dance 2 does not disappoint. With a catalogue of over 40 songs including dance club favourites: “Hey Ya!” by Outkast and Kesha’s “Tik Tok” and some more ‘mom friendly’ tunes like “Viva Las Vegas” and “Monster Mash”. However if your into different styles of music in general then look somewhere else as Just Dance 2’s soundtrack is pure pop and dance inspired. The game even features ‘Pay to Play’ downloadable content in the form of new tracks. Unfortunately the selection is currently locked at seven songs and it is unknown if Ubisoft will continue to expand on its downloadable selection.Just Dance 2 is fun, simple as that. Sure, the presentation and gameplay may not be the strongest in the genre and the song selection does not offer up much variety past ‘high energy dance tracks’ but just like the original, Just Dance 2 is a game that is better than the sum of its parts. Pull this out at a party or family function and you will immediately have a crowd gathered, waiting for their turn. This is a game that brings people together, just for fun, just for laughs, just to dance.