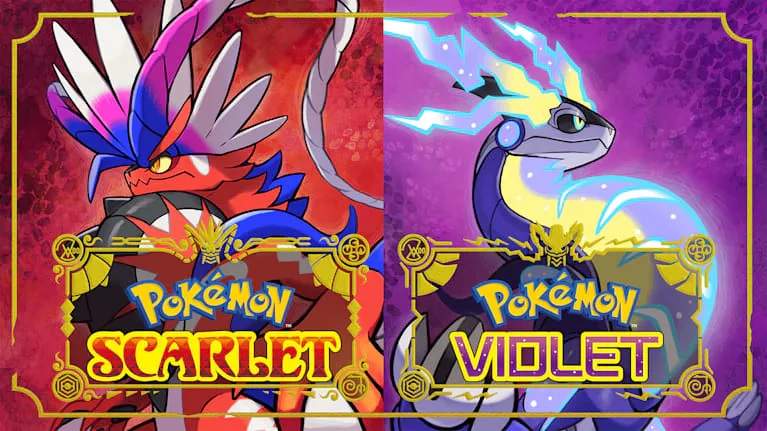 Scarlet & Violet bring alluring open-world gameplay and a slew of colorful new monsters to the fold, but quirks and spotty performance keep it from being the Titan it could've been.

Pokémon games have proven something of an enigma during their vast, rich history - much like the title in question, Pokémon Scarlet/Violet. This renowned series has varied quite a bit in quality, despite adhering closely to an established formula. While journeying to collect and fight countless strange creatures has maintained a rewarding, addictive charm, it's hard to deny it's grown a bit dull over the years - until now. In many ways, Gamefreak's latest entry rekindles that excitement, wonder, and innovation scarcely felt since the GameBoy debut.

There still exist many familiar, even formulaic elements here, yet the amount of freedom and depth offered largely overshadows them. The much-welcomed open-world gameplay proves enjoyable and befitting, and makes this offering particularly hard to put down. Now for the bad news: there are notable technical issues and a general lack of polish throughout. The rough, often buggy performance, coupled with some fairly empty, lifeless regions and basic visual design bog down what could have been a truly stellar romp. 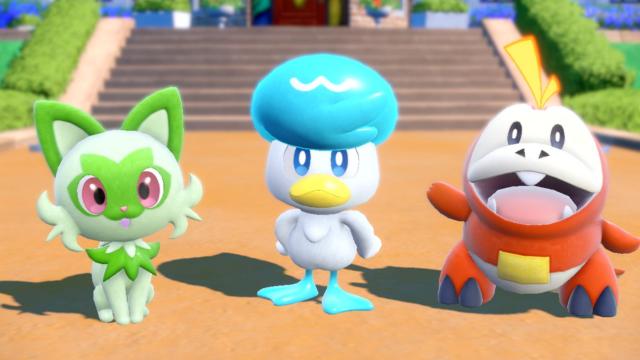 Ample shortcomings aside, I can safely say that this is some of the most fun I’ve had questing to be a Poké-master since perhaps GameBoy’s Gold/Silver. Gamefreak injects a few new elements which breathe some much-needed life and entertainment value into the experience. The main factor is the vibrant open-world locales, represented by the new region Paldea. There’s no segmented “Wild Area” ala Sword/Shield or Arceus' style zones, but rather a full-fledged seamless world... well, largely fledged anyway.

Modeled (loosely speaking) on Spain and Portugal, players will enjoy exploring Paldea’s winding paths, towering mountains, glistening rivers, and vast caverns, as well as the various monsters crawling within them. Honestly, the open-world environment and nonlinear progression alone bump up the fun factor quite a bit. I found myself having a good time simply wandering the wilds of Paldea, finding colorful new Pokémon, battling trainers (which yield rewards at the Pokémon Center), or just nabbing different items off the ground. 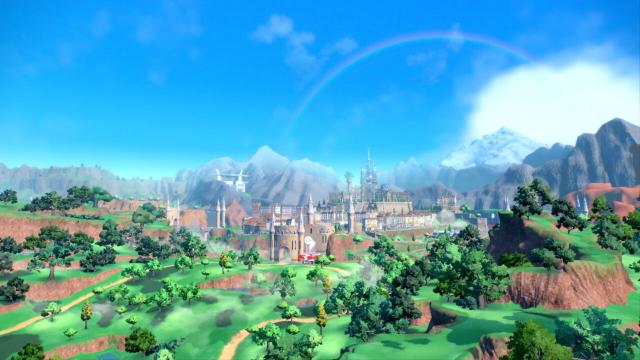 As touched on before, this is unfortunately tempered by some rough environmental models and bland visual elements. Performance issues also rear their ugly head quite a bit, especially when docked. On a technical as well as artistic level, Scarlet/Violet can be considered a mixed bag at best. Impressive draw distances can be tainted by polygons and shadows popping in and out. Various moving parts in the environments often give way to choppy, stuttering frame rates. Battle screens can be marred by awkward camera placements, sometimes getting stuck underground and revealing a vast nothingness below.

Even when disregarding technical rough patches, certain design elements are lacking in a more general sense. The aura of the sprawling, diverse biomes tends to be weakened by the flat, basic textures, blocky buildings, and rough edges that comprise them. And while featuring several towns that each have a unique thematic charm, these can be tempered by a lack of detail, repetitive food shops, and scant features within said towns. Character customization is sorely lacking in options as well. Although negligible to some, most of the trainers, townspeople, and NPCs in general are also rife with trivial, uninteresting dialogue. 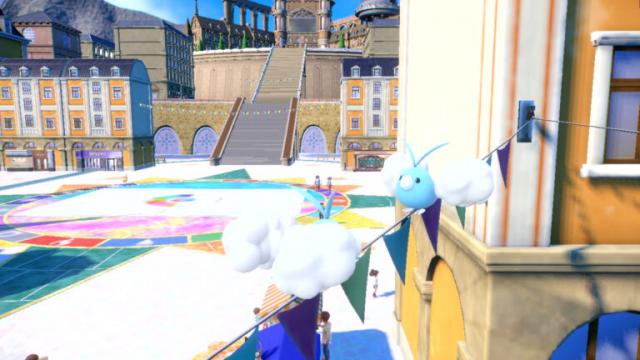 There are some impressive moments to be had presentation-wise, enhanced in part by the dynamic weather system and day-night cycles. It was a joy watching a sunset from atop the towering snowy mountain, or gliding across the plains with my legendary dragon Pokémon (who serves as your mode of transport). And speaking of these majestic monsters, the designs and models of the creatures themselves are actually quite sleek. It’s just too bad the same organic feel and detail couldn’t have been brought to the environments. The game has received at least one semi-major patch as of this writing, and as a whole my experience with major tech issues has been tame compared to some accounts. But in terms of presentation and performance, Scarlet/Violet can feel borderline unfinished or rushed at times.

With that all aside, I was able to forgive quite a bit venturing through Paldea and gathering from a diverse pool of 400 Pokémon, both new and old. Pokémon can be seen wandering about in mostly pre-designated areas, often in packs, and varying in size. While randomized battles are done away with, it’s still quite easy to be overwhelmed - and often ambushed - by gaggles of monsters. You now have the ability to bypass the typical drawn-out fights (which can get cumbersome and repetitive), by sending your lead Pokémon forth to clash with targets in the environment, prompting quick auto battles. 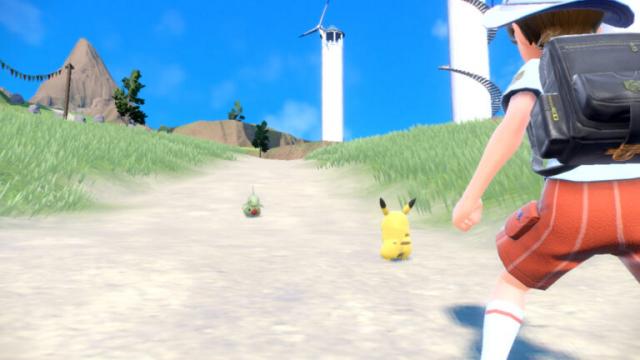 It can be tempting to spam this feature for faster progress, though Gamefreak incentivizes normal battles too. This is done by way of flashy move animations and far greater XP rewards compared to auto battles. In either case, scouring for new Pokémon is a satisfying experience that rarely gets old, given the seamlessness and added immersion. Being more of a retro GameBoy era player, I relished finding and battling old, familiar favorites like Azumarill, Magneton, and Dugtrio, while my prized Paldea native Meowscarada often led the way (I find the Grass-Dark combo pretty cool). But it was similarly fun running into strange new critters - like the boxy Minecraft-esque Naclstack or the cute-but-intimidating Psychic giraffe Farigiraf - and rounding out my party with them.

It should be said that there's a notable lack of elaborate dungeons, side quests, or other activities despite the vastness of the world. Still, there’s much to do in this 25-40 hour epic just by way of Pokémon hunting and grinding, as well as aimlessly exploring. I embraced the fun challenge of venturing off the beaten path to find awesome monsters well beyond my level, or running into trainers that gave me a run for my Pokedollars (or, if you prefer, the alternative currency called League Points). There's no scaling, mind you, so the difficulty can be quite inconsistent. Yes, Gamefreak basically permits to you wander off almost anywhere from the get-go. This doesn’t include a few regions which are inaccessible until upgrading your Poke-transport with more mobility following gym wins.

You’ll eventually enhance your Legendary rider given at the start (either Koriadon or Miraidon depending on if you have Scarlet or Violet, respectively), with the ability to move across water, glide, and climb mountains. This, of course, makes travel far, far easier - which is liberating considering navigation can be a bit tricky early on. Being deprived of these fun means of travel initially serves as the only real restriction or linearity. Oh, there's also the annoying feature of Pokémon refusing to fight for you if their level is too high, which is dealt with by getting those triumphant gym wins. So you can't go too hog wild when it comes to shortcuts in progression. 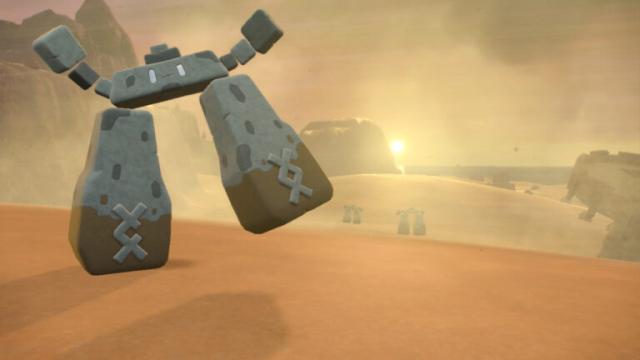 This erratic pacing and progression may be understandably frustrating to some. Yet I quite enjoyed this perilous journey into the unknown, missteps and all. Sure, you’ll inevitably hit regions where you’re overpowered to the point of feeling dull, or get trounced by overpowered beasts. Yet it's this unpredictable nature that made it exciting. Indeed, the abundance of dialogue and (relatively) strong plot aside, Scarlet/Violet emphasizes the individual experience; making your own narrative untethered to the linear restrictions of prior games.

It does maintain a loose focus by emphasizing a few main goals or “story paths” to beat, the locations of which are scattered about the map, and can mostly be done in any order. The first are the aforementioned gym trainers, which each offer random challenges prior to the epic showdowns. These include some occasionally goofy missions, like rolling a giant olive through a winding track. Why not?

Another path, Starfall Street, grants a unique way to progress while learning more about the game’s villains, the rebellious Academy students called Team Star. These missions have you infiltrate various Star bases and wipe out 30 of their Pokémon using the auto-battle feature. This culminates with a major battle in which you fight the leader’s Pokémon, as well as their monstrous “Starmobiles”. While these missions were amusing, I wasn’t huge on the frequent auto-battling, nor the relatively trivial rewards upon winning (TMs). 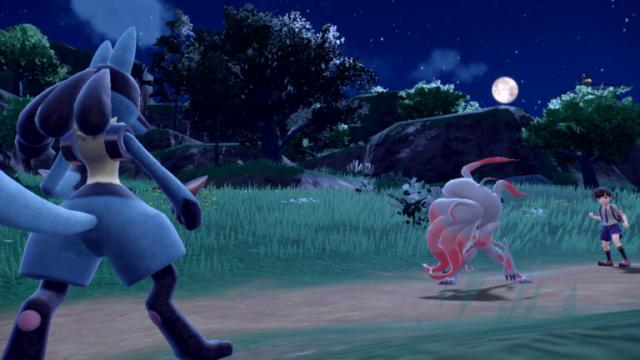 The last path, Path of Legends, might be the most fun and significant. Featuring an intertwining story involving the rare, restorative Herb Mystica, you’ll seek out a handful of huge rare Titan Pokémon. Portions of these wars of attrition are fought alongside your Academy friend Arven. This story path brought the most fun and intrigue for my money, especially given its useful reward of Koriadon/Miraidon transport upgrades.

Aside from the open-world gameplay and new story paths, the biggest addition in Scarlet/Violet is the new “Terastallizing” feature. Serving as a more creative version of Sword/Shield’s Dynamaxing, fighters can gain an upper hand and shift the battle dynamic with this cool new crystallization power. Tapping into a rechargeable “Tera Orb”, players can choose to power up their monster and enhance their elemental type. This is represented by a hypnotically shining Tera Jewel on their heads. What makes this really interesting, however, is that Terastallized Pokémon can sometimes take the form of a different type - shuffling the deck with regard to elemental advantages. Along with the factors of Abilities and Berries, craftable TMs, and Breeding (via Picnics), Terastallizing adds a bit more challenge and strategy for those who seek it, giving battle matchups an added dimension. 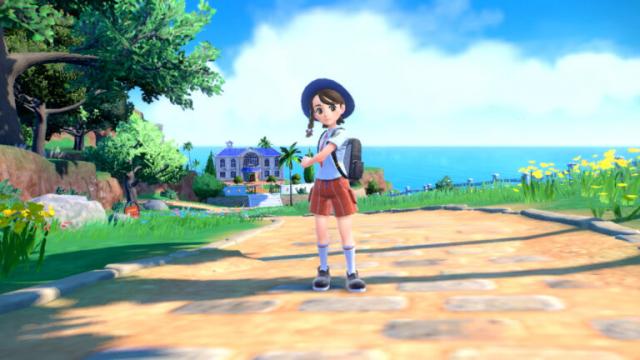 Finally, thrilling multiplayer battles and useful trading make their return. For the most part they prove fun, rewarding, and fairly simple to execute. But additionally, Gamefreak incorporates a system of local and online co-op this time. It’s great to see that, at least in a sense, cooperative multiplayer is being widely supported, though it can be a tad cumbersome as it relies on link codes for matchups. Players can opt to invite up to three friends to roam around Paldea untethered with them in real-time, go exploring together, have picnics for buffs, and score version-exclusive Pokémon (assuming players have different versions).

The most notable feature on this front is the game’s version of multiplayer raids, where players can take on powerful Terastallized Pokémon. These vary wildly in difficulty, represented by an illustrated star level. It should be said that, while fun and thankfully numerous, this is unfortunately the bulk of the game’s truly cooperative gameplay. Most of the multiplayer experience is far more passive, as players will have to battle Pokémon and achieve most tasks separately despite occupying the same environment online. 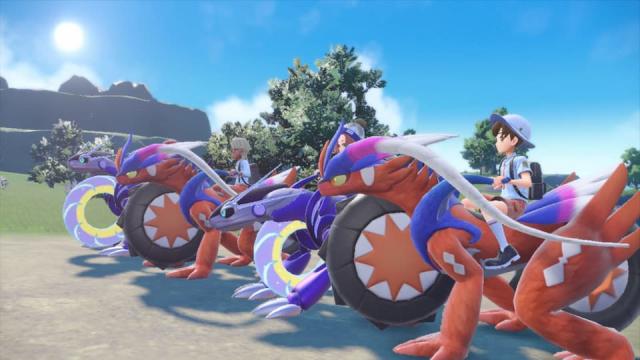 This was a tough one to analyze and review, as I’ve scarcely played a game so simultaneously gripping and so crudely crafted technologically. From a pure content standpoint, Scarlet/Violet mostly satisfies, and rises above performance blemishes - thanks mostly to the fun exploration and rewarding progression. With its balance of nostalgic/familiar gameplay, new features like Tera Raids, and a full open-world system, this is a delightful Poke-epic that should entice newer, younger fans and old school vets alike.

Even if the game sees some major fan-requested patches, it’s hard to see this one ever shining like a Tera Jewel, but at least the potential for improvement is there. For the time being, Scarlet/Violet is an enjoyable RPG with a titan of squandered potential. Now we just need a mainline Pokémon game that fuses the polish and charm of the early generations while running with the open-world depth of this one.