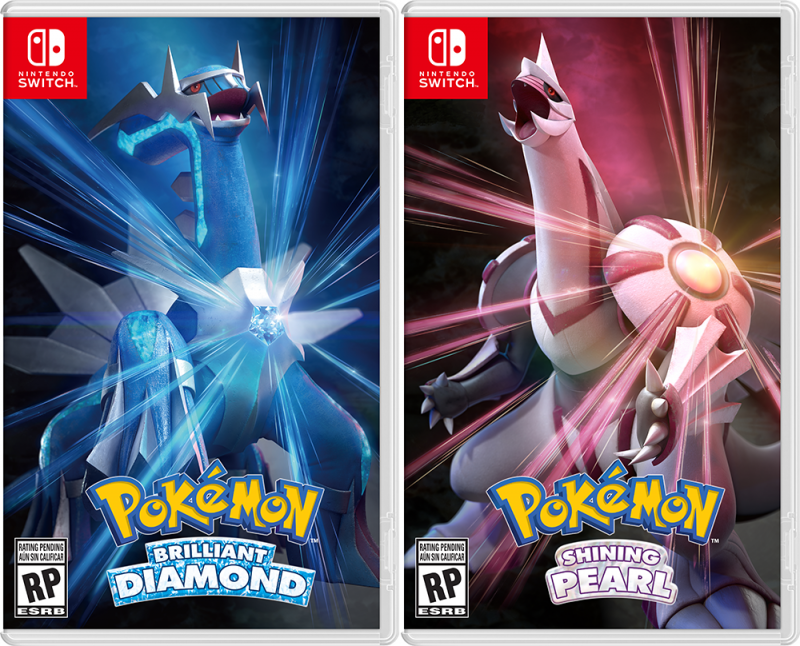 Nintendo is a company of ups and downs. For every Donkey Kong Country: Tropical Freeze, there must be a Paper Mario: Color Splash to balance things out. For every Pikmin 3, a Star Fox Zero. Yin and yang, maintaining some bizarro world sense of balance. And after the release of October’s excellent Metroid Dread, I was worried I might be starting to build up a dangerous amount of goodwill towards Nintendo. Fortunately, Pokemon was happy to oblige and take the blow to ensure we all remember that Nintendo-published games can be disappointing just as often as they are exceptional. 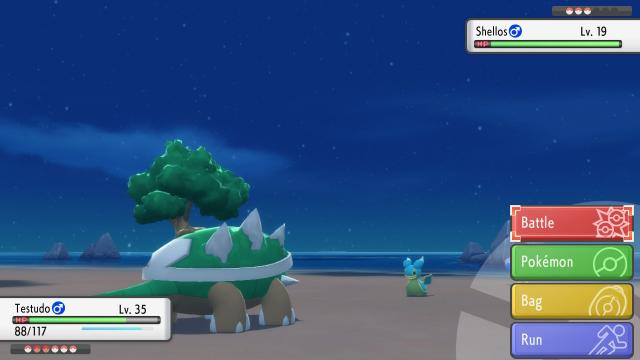 Perhaps that sounds overly harsh. Still, I don't think it's an unfair assessment to say that Pokemon Brilliant Diamond is one of the worst remakes, or remasterings, or whatever you want to call it, that I've ever played. Nearly everything that a revised version of a game should do, Brilliant Diamond does not. Does that mean that there is still a halfway decent game at the core of Brilliant Diamond? Sure; if you enjoyed the original Diamond and/or Pearl on DS, then you'll probably still enjoy this. But as far as what a remake/remaster should accomplish, it's hard to view Brilliant Diamond as anything short of an absolute failure.

Pokemon has long been a series that’s done the absolute bare minimum to innovate between titles, so putting out a low effort remake of a past game feels like standard operating procedure in a way. I’d spend this time summarizing the story, but these things basically come pre-installed with the Pokemon sourcemaker at this point. Some child with far too little parental supervision (that’s you), gets recruited by a professor who very obviously isn’t answering to any IRB. Said professor tasks you with wandering around and researching a variety of wild animals by making them beat each other into unconsciousness. Your player character proceeds to traverse the island of Sinnoh, exploring the different environments and engaging in some… “research”, either with wild Pokemon hiding in bushes or the occasional domesticated Pokemon hiding in someone’s undoubtedly massive pokeball. 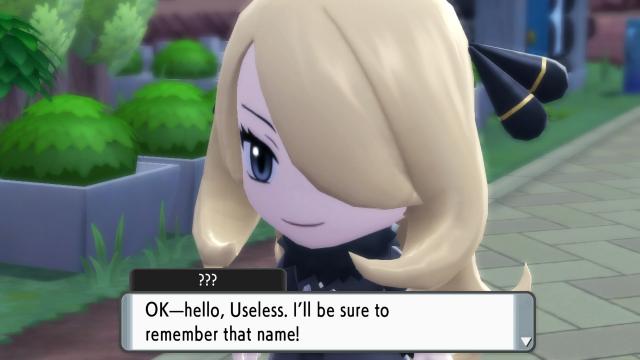 Nothing much has changed with respect to the story from the original title (or indeed much from the very beginning of the series), so let's talk about the gameplay instead. Unless you’ve spent the last 25 years living at the bottom of the Mariana Trench, you almost certainly know what a Pokemon game entails. Travel between towns, occasionally foil the plans of whatever group of local idiots is attempting to use a legendary Pokemon to create a perfect world (in this case named Team Galactic), fight some gym leaders for their badges, and then once you’ve beaten everyone else’s domesticated attack dogs up you can challenge the most powerful attack dog owners in all the land for the right to become champion of turn-based dog fighting. The strategy remains exactly what it was back on the DS and indeed in every mainline Pokemon release: form a team of Pokemon who have type advantage against most of the major Pokemon types and you’ve pretty much won the game, bar 20 or so hours of disinterestedly shuffling around Sinnoh and having old men demand you stop every few feet so they can fight you.

But let’s focus on the differences that do exist between the original DS title and this version, small though they may be. Organizing your Pokemon is easier than it has been in many past installments, carrying over Sword and Shield’s fast swap mechanic. Exp share is also a welcome boon from Sword and Shield, at least for people like me who don’t quite find any psychotic joy in slowly grinding up 50 different Pokemon on the same file, although it does mean the difficulty curve breaks in half around the second town and never recovers. The stupid context sensitive blocks from the original game that would just randomly wall off certain pathways in the overworld and could only be broken with specific attack types that were almost never useful in battle are back, but at least you can now basically automatically use them as long you’ve learned the prerequisite move, rather than having to carry a Bidoof around as one of a limited number of slots. 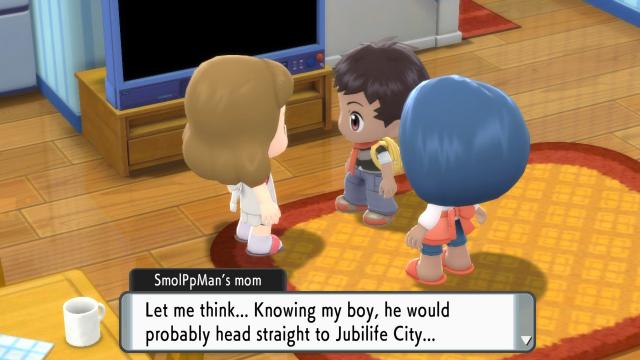 The biggest change in terms of content is the Grand Underground, an expanded version of the Underground from the original titles. The Grand Underground basically serves as a big area for finding and grinding certain Pokemon types, although the practical upshot of this meant that I was able to absolutely shatter whatever semblance of balance still remained by going underground, capturing some higher level Pokemon, and then just running roughshod over the ensuing gyms. But, hey, it’s a nice thing to have to cut down on the grinding required to beat the game, and it is optional, so you can ignore it if it makes things too easy for you.

And that’s about it. While all of these are fine additions, a game with the price point of an entirely new title needs to put in a lot more effort to justify its price point. Nintendo has consistently made a habit of putting out low effort remasterings for full price for a while now, and quite frankly it's getting old. It's not like there wasn't additional room to improve; there are plenty of QoL features that Pokemon could really stand to benefit from like harder difficulties, cutting down on tutorializing, and greater accessibility options, and a remastering like this is probably the easiest place those features could've been implemented, given much of the game's design is already laid out. Alas, these are nowhere to be found. 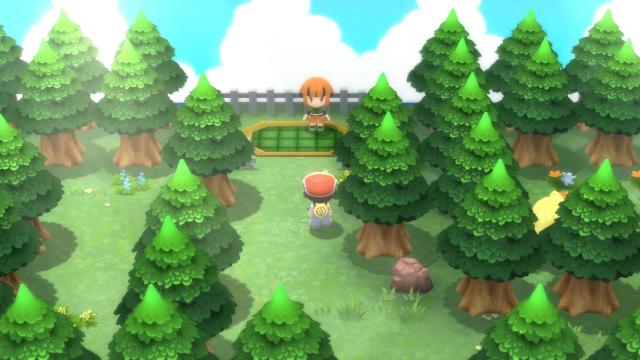 I suppose the devil's advocate position would be that Brilliant Diamond justifies its price point with the graphical overhaul, but that definitely doesn’t cut it here, because Brilliant Diamond somehow manages to look worse than the original DS title. The player characters have this weird chibi design which makes Sinnoh’s residents look like characters from Jetpack Joyride that got turned into 3D models. The DS version’s sprite-based style has aged wonderfully since the mid 2000s, while this change to 3D models is far less enjoyable to look at. It also robs the game of any tension or realistic chance of being taken seriously at all when the main antagonists look like bobbleheads that have come to life.

Granted, games don’t need to look great to be good, and questionable visuals don’t usually break a game. It does however raise the question of how Brilliant Diamond justifies its price tag. It certainly isn’t for the graphical changes, and the few gameplay alterations that make exploring more convenient, while nice, certainly aren’t worth $60. 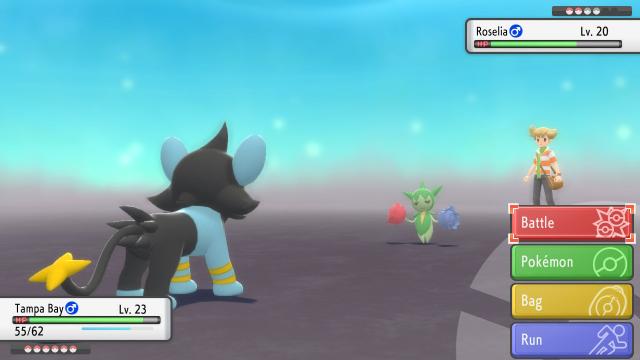 The final nail in the coffin of what is unfortunately a waste of time is that Brilliant Diamond is missing most of the extra content that came with the initial “definitive edition” of Diamond and Pearl, namely the new features in Platinum. So if you were hoping to play around in the Distortion World, or hang out with Looker again, then you’re just as well off spending your money on a giant tub of peanut butter to bury your sorrows in. Brilliant Diamond doesn’t even measure up to the better version of these games that came out a decade and a half ago now, and if that doesn’t guarantee that it isn’t worth your cash, I’m not sure what does.

What I’m trying to get at is that Brilliant Diamond isn’t just not a significant improvement over the previous versions, it’s a downgrade from the actual definitive version. Paying full price for a worse version of a title isn’t just questionable, it's flat out loony. Remastered versions of games should have more content than the previous versions, not less. Remastered versions of games should look better than the previous versions, not worse. Buying this title is paying $60 for less content and worse graphics, in exchange for a few quality of life improvements. There are very few worse value propositions on the market today. 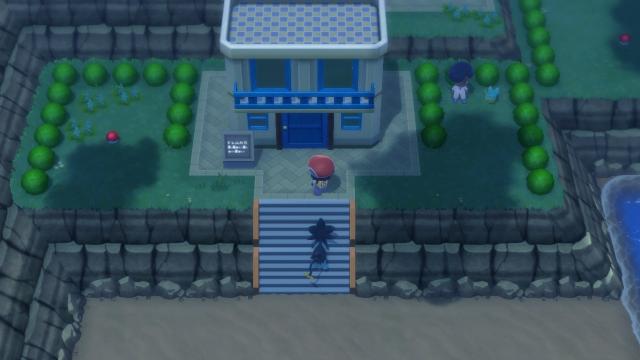 The lone bright spot in the midst of this sea of disappointment is the soundtrack, which is quite good. There are some very audibly-pleasing remixes of the original Diamond/Pearl tracks, and I’d be remiss in not acknowledging the work done by the composers here. I can’t imagine it must have been easy to come in and put in actual work every day when the rest of the dev team certainly wasn’t.

In short, Brilliant Diamond is frankly exasperating. The Pokemon Company is an entity with resources beyond most developers’ wildest dreams, and yet it consistently creates some of the least inspired and unadventurous titles in the industry. Brilliant Diamond is no exception. Even with the leeway for not changing things up that being a remake carries with it, this is just a rip-off. Please, don’t financially support this; hopefully someone at Pokemon eventually takes notice and realizes that they need to start putting in a smidge of effort to warrant continuing to get people’s money.

This review is based on a copy of Pokemon: Brilliant Diamond for the NS