If there's one flaw among anime fighters like Guilty Gear and BlazBlue, it's a steep learning curve. Enter Blade Strangers, an old-school 2D fighting game with understandable button commands and intuitive controls. While it lacks the mechanical complexity and tactical depth of the best of Arc System Works, it's far more approachable — especially for beginners. If you gravitate toward classics like Street Fighter II or modern brawlers like Super Smash Bros., this is the anime fighter for you.

An accessible four-button control scheme sits at the heart of Blade Strangers. The Y button performs a fast, light attack that's ideal for starting combos; the X button initiates a slow, strong heavy attack; the A button triggers a skill, a powerful attack (sometimes a projectile); and the B button is reserved for unique moves — used to evade opponents' attacks. All of these have down and sideways variants; the sideways heavy attack can actually be charged, similar to a smash attack in Super Smash Bros. There are more complicated moves like heavy skills (heavy + skill), EX skill (skill + unique), and ultra skills (skill + heavy + unique) — the last two deplete a Skill Gauge — but in general this system is designed to strip away the complex commands, overdrives, guard crushes, and cancels that make arcade fighters intimidating to the uninitiated. 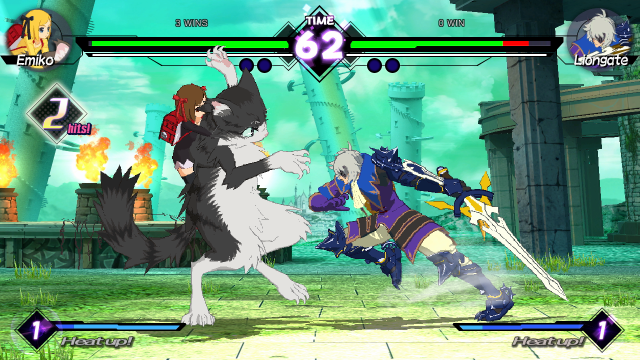 If the game's controls are refreshingly pared-down, its collection of modes is quite extensive. In addition to classic modes like Arcade and Versus, Blade Strangers enjoys a Story mode, a robust Tutorial, an Online arena with casual and ranked matches, a Training area, and a Missions mode with combo challenges and survival (a fight against consecutive CPU opponents). In addition, there is a Profile page, where players can check online and offline records, and swap in unlocked titles and character face plates. While not every mode is a winner — Story mode is disappointingly inert and the Missions mode a missed opportunity — they all combine for a substantial fighting package.

Equally substantial is the game's fan service. A joint venture between developer Studio Saizensen and publisher Nicalis, Blade Strangers contains among its roster fan favorites from Code of Princess, Umihara Kawase, The Binding of Isaac, and Cave Story, and each is given his or her own stage and a selection of alternate color settings. Other entrants include Gunvolt from Azure Striker Gunvolt, and that most promiscuous of indie darlings, Shovel Knight. If you're a loyal follower of one or more of these series, Blade Strangers might be worth a glance on nostalgia alone. Moreover, Studio Saizensen has done a spectacular job transforming these 8-bit and 16-bit mascots into fully-animated anime fighters. 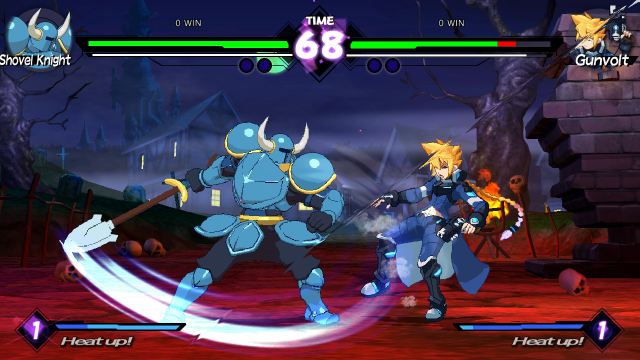 As each character belongs to a unique franchise and, in some cases, genre, and retains his or her unique skills, the range of fighting styles and move sets on display in Blade Strangers is diverse. Shovel Knight, for example, excels in short-range, close-quarters combat, while Ali from Code of Princess and Lina (an original character) are fast-moving combo artists. Quote from Cave Story is a fan of long-range projectiles and Solange, also of Code of Princess, a master at spacing, thanks to her enormous sword.

Considering the eclectic mix of backgrounds, body types, and weapons thrown together, Blade Strangers is remarkably balanced, with no one character dominating the dojo. Only Isaac with his relatively small stature — think Oddjob in GoldenEye 007 — stands out, but his small hitbox is offset by a short reach. 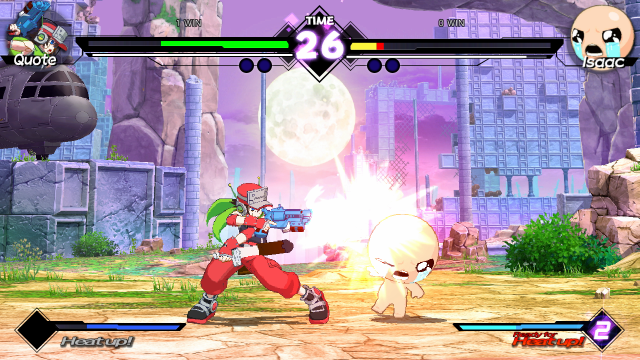 Graphically, Blade Strangers is a mixed bag. Many stage backdrops sport low-quality textures and suffer from some unsightly aliasing, but the characters themselves all look great. The game uses a proprietary development system that converts 3D character models into 2D sprites. The result: amazingly fluid and detailed animation. Backgrounds notwithstanding, Blade Strangers looks at times like an anime sprung to life.

Blade Strangers is fun retro fighting game, wrapped in anime packaging. It's held back somewhat by a couple of dull modes and uneven presentation, but is buoyed by its intuitive control scheme and assortment of crossover characters. Most importantly, it delivers interesting, balanced, rewarding 1v1 fighting. Eschewing the Byzantine systems of many modern anime fighters, Blade Strangers invites fans weaned on early 90s arcade fighters back into the fold.

This review is based on a digital copy of Blade Strangers for the NS, provided by the publisher.