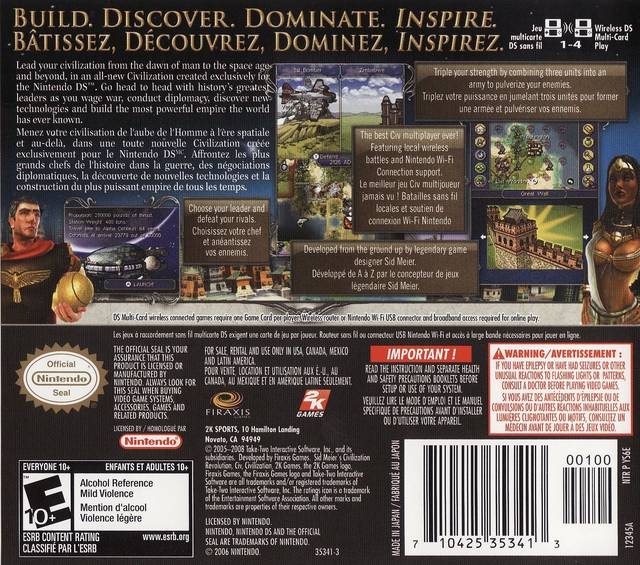 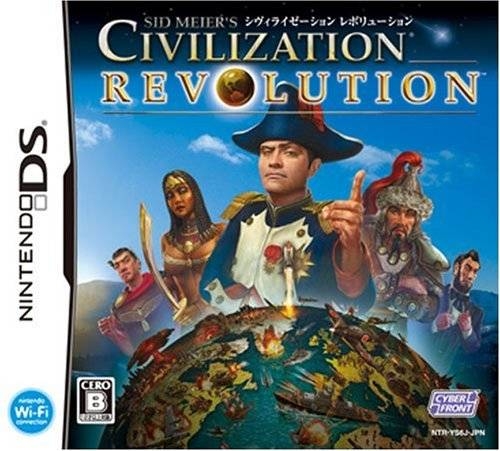 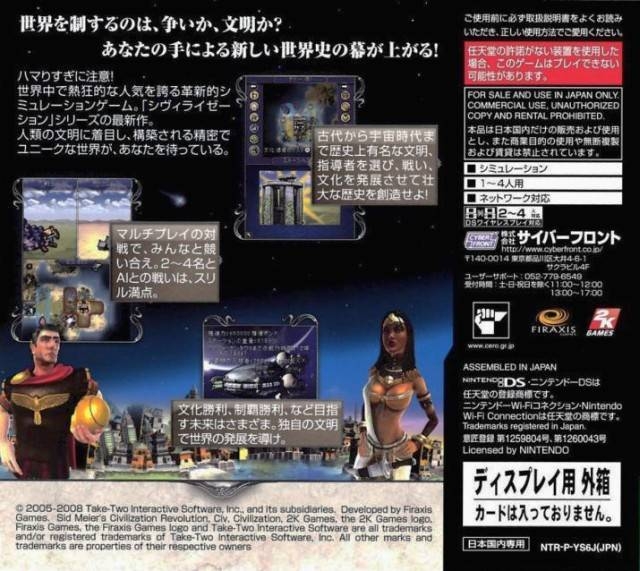 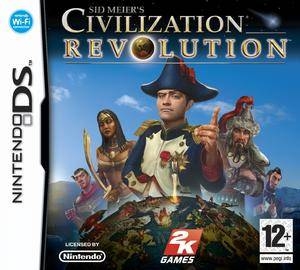 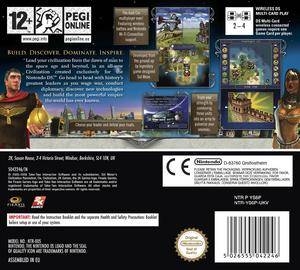 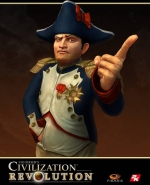 Is a Civilization in your pocket fun to play? Find out in this review.

There has been a growing tendency lately to adapt classic PC games to the Nintendo DS. Due to the unique gameplay opportunities afforded by the capabilities of the DS, it was no surprise when a new version of the PC classic Sid Meier's Civilization was announced for the system. Now that I have tried it out, I am very happy to confirm to all those aspiring conquerors out there who dig this sort of game that the adaptation was successful and the game retains most of the elements that made the franchise a success in the computer gaming world.

Nevertheless, for those of you who are not familiar with the series, here is a brief description regarding what this game is all about. Civilization Revolution is a turn based strategy game in which you assume control of one among 16 possible historical civilizations and compete against the others for world domination. Unlike other games in the genre, in Civilization-Rev the military aspect is only one of many components that can lead to victory. To win you have to factor in details such as economy, scientific prowess, urban development, government system, culture, and diplomacy.

Sounds complex? Don't worry - the game does a great job making it simpler for you. On the one hand, decisions are presented to you in clear, multiple choice formats and through very user friendly options menus. On the other hand, there is an ever present team of advisers offering their expertise on the consequences of each decision. In the end, you realize the process is very intuitive, and can be easily mastered with a little practice and common sense.

The civilizations in the game are the following: the Americans, the Spanish, the British, the French, the Germans, the Russians, the Arabs, the Romans, the Egyptians, the Zulu, the Aztec, the Hindu, the Chinese, the Japanese, and the Mongols. Each one is unique, and enjoys a couple of civilization-specific bonuses respective to the others. For instance, the Aztec begins with additional gold reserves, while the French start out with a powerful cathedral that provides them a cultural head start over their neighbors.

The gameplay centers mostly on the cities of each civilization. You start out with one or several cities, but you can multiply their numbers by training colonists to found new ones. Each city reclaims a territory around it in order to grow (and this territory increases as the city becomes larger). As you may have guessed, the cities compete over territory, so it is very wise to spread out your towns somewhat in order to keep your own subjects from stunting each others’ growth. If a city manages to territorially overwhelm a neighboring enemy town, this may be peacefully ‘swallowed’ by your civilization and switched to your team (the other way of obtaining enemy cities is by outright military conquest). In the end it is the addition of new territories to your cities that determines the boundaries of your civilization.

The other key resource in the game is time. Since each city can only perform one action per turn, you have to choose wisely how you administer them. Depending on your need and strategy you can focus on training military units for armed conquest and defense, or buildings to improve and help grow your cities. Or perhaps you will opt to build ‘Wonders’, which are very slow building structures that endow your civilization with special abilities.

Another way of obtaining special abilities is through the use of historical icons. These historical characters have special abilities (for instance, Tipu Sultan improves the gold yield of the city where you install him, while Salvador Dali increases the cultural power of his assigned hometown). These characters can be obtained when you reach certain trigger points in the game such as when you advance up in the age tree.

There are a total of tour types of victories in the game. The Military Victory is achieved when your armies have conquered all the enemy capital cities. The Economic Victory happens when you complete the World Bank Wonder in one of your cities (you require 20,000 gold in your reserve to unlock this wonder). The Cultural Victory is achieved when you build the United Nations Wonder (which can be built only after you have collected 20 conquered towns or historical icons for your civilization). Finally, the Technological Victory is achieved when you manage to be the first to land a colonist in another planet (you need to have all the technologies researched to build the spaceship). In standard games all these modes of victory are valid, but there are several game types in which victory conditions are restricted to only one (often Military).

Let’s talk now about controls and visuals. It is possible to control the game either by using the stylus and touch screen or through the more traditional method of using the buttons and the D-Pad. As mentioned earlier, most of the commands are issued by navigating through pop-up menus that appear automatically every time a city needs new orders, although you can voluntarily pull up the menu for each city or military unit and change the commands. Regarding graphics, there isn’t all that much to praise. The game is reduced to a series of highly polygonal maps where the resources, units, geographic landmarks, and cities are all represented by tiny and fairly angular icons. The animations in the top screen (be it the advice of your counselors, the threats of enemy governors, or battle clips) are also very primitive and repetitive. There is no dialog, and all voice acting is guttural (you get the message by reading through text).

However, to be fair, Civilization Revolution DS was never meant to be a game that wowed its fans with pretty visuals. This is a game were it is all centered around the strategy and gameplay experience, and in that respect, it delivers. The replay potential is nearly infinite and you can have a blast playing it either alone (the AI is fairly challenging in the upper modes and overall very satisfactory) or in multi-player with friends. The number of maps is almost endless (although they tend to be very similar) and the number of game types is just daunting. Add on top of all that the 16 civilizations you can choose from and you’ll realize this title offers a very rewarding and long-lasting return on your investment.

Furthermore, who among us has never wondered if we’d be able to conquer the world if presented with the chance? Even if it is, as in this case, the pocket and somewhat polygonal world of Sid Meier’s Civilization Revolution DS…