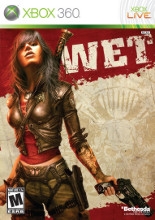 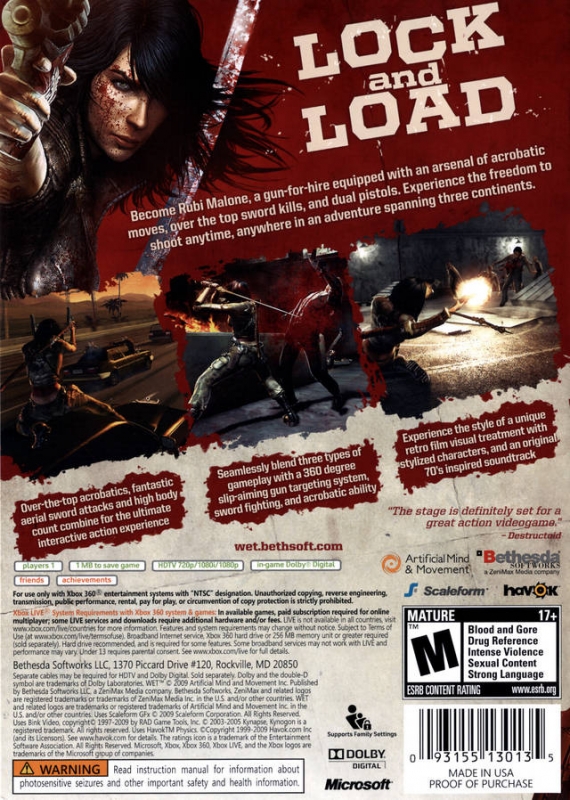 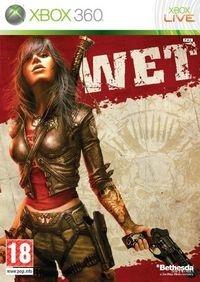 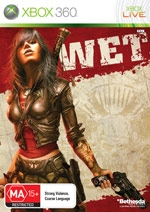 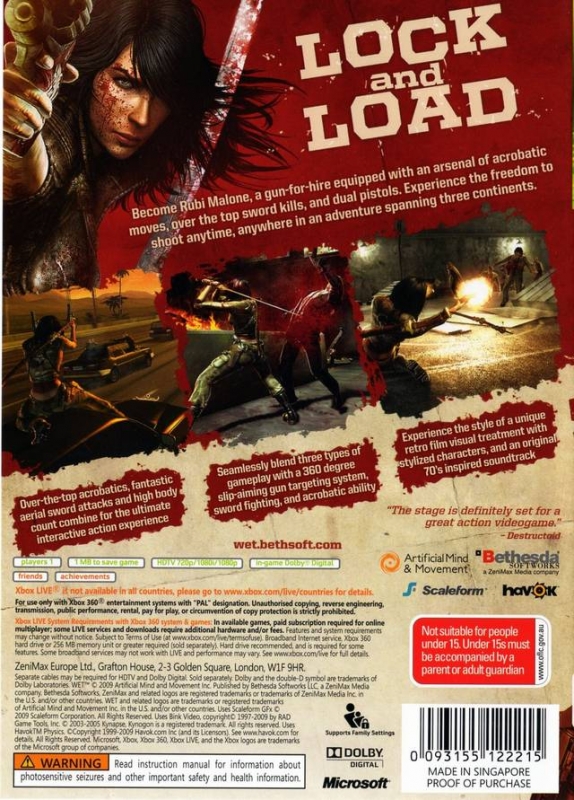 A bloody tribute to grindhouse that just ends up being a bloody grind.

WET is the classic revenge exploit film from the 70’s turned into an explosive action game. If you can imagine a cross between Stranglehold and Heavenly Sword, you will have a pretty good idea of what to expect. You may argue that aiming to replicate a B movie feel in your game is not the best way to strive for quality. Well, you would be wrong on some levels and irrefutably correct on others, because WET has some ideas that are a blast and others that just don't pan out the way they should.

Gamers assume the role of Rubi Malone, a gun for hire who will do anything for the right price. She is the type of girl that likes to drink hard liquor, bounce off walls, and has dual pistols and a katana as her choice accessories. The game starts with Rubi on a bullet-wasting mission in Chinatown where she must track down a special briefcase. Here you will receive your first taste of the combat system that drives WET.

Never has the ratio of bullet time to real time been so skewered in a game. Slow-mo happens any time you slide or jump while firing at enemies. Because Rubi dual wields at all times the game automatically targets a nearby baddie, leaving your other gun free to fire at any other enemy. When in bullet time you have 360 degrees of split-aiming control. This system feels surprisingly intuitive as it makes it possible to dispose swarms of enemies quickly. The sword combat isn’t as refined, a single button affair that can feel satisfying at times but evolves very little throughout the game. Points are earned for gracefully defeating enemies and stringing together large multipliers. These points can then be used to upgrade both Rubi’s weapons and abilities.

The set-up for the gameplay is consistent throughout the experience. In between taking down the usual onslaught of foes, Rubi will run along walls, swing from poles, slide down ladders, whatever it takes to maneuver through the linear levels. Several times throughout a mission, you will enter an arena area where enemies will spawn from numerous doorways that you must physically close off one by one to eventually purge the entire zone. The game grades you based on how timely you completed the objective and how many multipliers you managed to collect.

Every now and then, WET tries to break up the monotony by dropping Rubi into fast moving high-octane gameplay segments. These include chase sequences where the raven-haired warrior perches atop a speeding vehicle and relies on quick time events to hop onto other cars, leaving massive carnage in her wake. Another example comes in the form of a level where you are falling out of an exploding airplane and must shoot enemies while falling, and then later on you must avoid being struck by large chunks of debris in an attempt to secure the only parachute. It’s very similar to that scene in the movie Shoot Em Up, only very frustrating and not nearly as much fun to witness.

As nimble as Rubi may seem, there are still a few problems when it comes to moving around the game’s environments. Some jumps require overly precise timing to complete or else you will fall to your death. Pressing LT activates Rubi vision, which highlights objects and geography you can latch onto in order to progress through the level. Even with this and the occasional marker as hints, it can still be tricky to figure out exactly what you are supposed to do. As a result, jumps that should be a sure thing aren’t, which when coupled with the rare instances of camera problems makes getting around a chore.

The game’s title, WET, is a euphemism for the bloody nature of Rubi’s line of work, and this is represented best in the rage mode. Always introduced by a scene where blood splatters all over Rubi’s face, the rage mode turns the visual style on its head with a very stylized look. It's akin to Madworld, where everything is either colored black, white or red. This change has no effect on the gameplay, other than in accentuating the elegance of the combat and bringing out the best of the game’s soundtrack.

The combat system wears thin after a certain point. Things are shaken up a bit with the inclusion of three weapons to choose from other than your pistols. Blasting away with the twin shotguns, machine guns, and even exploding crossbows can be fun the first few times, but they run out of ammo in a hurry so you will fall back and settle on your infinite ammo pistols. One of the biggest disappointments is that the game isn’t built for boss fights. This flaw leaves one-on-one encounters to result in underwhelming quick time events right up to the game’s anticlimactic finish.

That brings me to the game’s story. The script is cheesy and predictable; paying homage to the pulp classics it is based on. None of the characters are memorable at all, including Rubi who is surprisingly unlikable for a leading lady. Yes, there is lots of blood involved, and the cutscenes can be rather ruthless and twisted, but it is also tamer than you would expect. The appropriate shock value just is not there to draw you in and keep you invested in the narrative.

Story and characters aside, the rest of WET’s retro-geared presentation is well put together. The visuals can be rough at times with framerate hitches and awkward character design, but then again this is supposed to a B movie production, so B rated visuals are what you get. The grainy film filter (that can be toggled off), which the entire game is put through, is one of the more engaging design decisions, and the aforementioned visuals of the rage mode are spectacular. One of my favorite things about the presentation are the classic drive-in movie advertisements interspersed throughout the action. The soundtrack is an unexpected high point for WET, featuring punk/rock explosions that synchronize almost perfectly with the onscreen action.

As seems common with action games featuring shallow combat, WET really lacks value. The 12-mission story mode can be cleared in a long afternoon sitting. There is no real reason to come back to it unless you want to collect all of the hidden toy monkeys, or try your hand at a harder difficulty. You can go for the highest score possible by playing through the adventure in the Points Count mode, or tackle the many time trials in Rubi’s bone yard playground. The point is, you will not get much mileage out of this game at all.

WET misses the mark by a very thin margin, which will leaves gamers mourning over what could have been. There is just too much frustration condensed into what is ultimately a short, shallow experience. The game is worth checking out for a quick thrill or two, but will leave anyone who buys it feeling high and dry. Oh the irony!