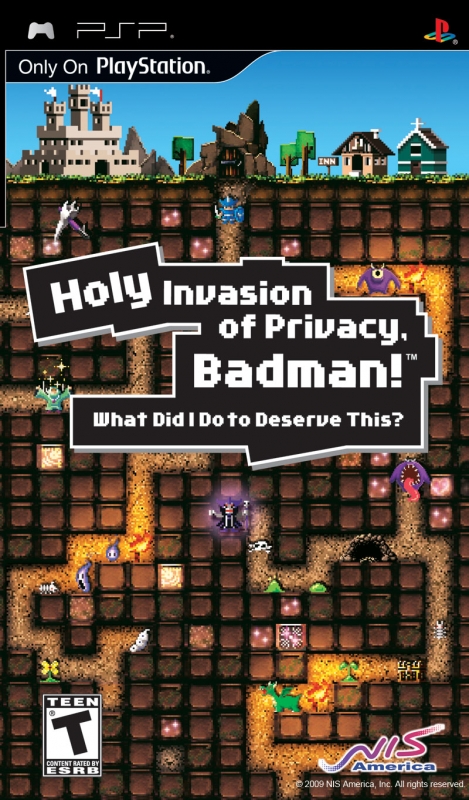 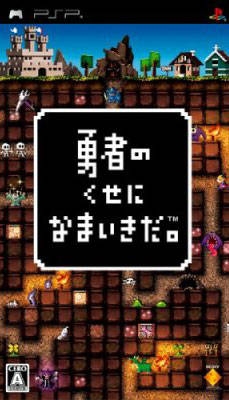 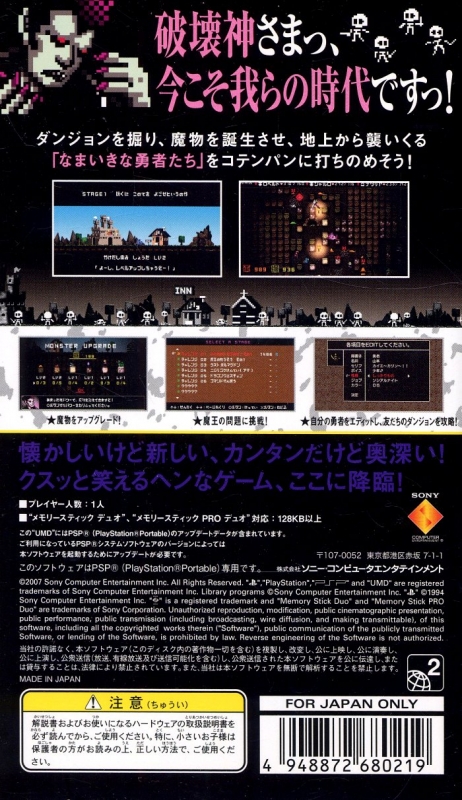 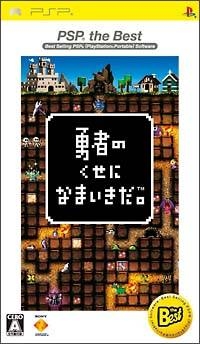 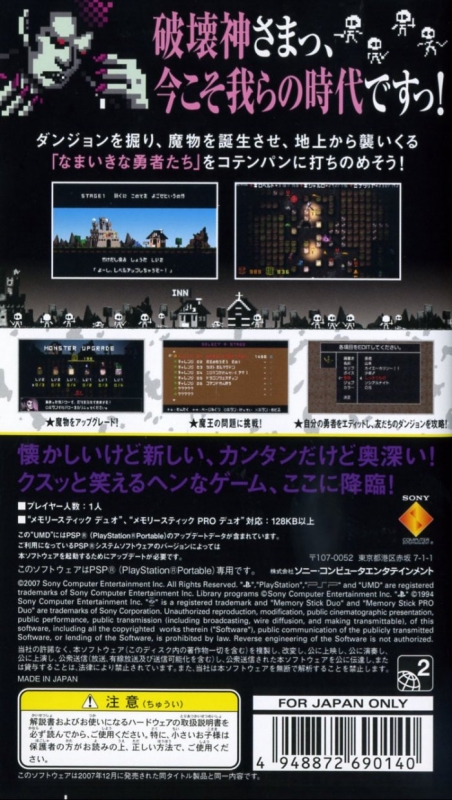 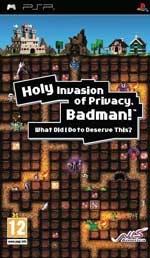 Holy Invasion of Privacy, Badman! What Did I Do to Deserve This? (PSP)

Badman welcomes you to the first day of the rest of your life in Dungeonology 101!

I personally believe the title says a lot about a game. For instance, a wild title like Holy Invasion of Privacy Badman! What Did I Do To Deserve This? (henceforth known as Invasion, for short) tells me to expect a one-of-a-kind experience. Brought over by NIS, this strategy game centers on the other side of dungeon crawling by teaming you with the forces of evil. Uniqueness isn’t everything though, because, despite it’s simple exterior, Invasion may be too niche for its own good. Everything from the gameplay to the humor is geared to specific type of gamer. Some will find an interesting strategy game with a witty script. Others will find a frustrating adventure where end control is too far removed from the player. One thing that is indisputable though is that you would be hard pressed to find anything else like it.

You are the God of Destruction. Summoned to the Netherworld by the Overlord Badman, you control a disembodied pick-axe from above. Your one goal is simple; construct the deadliest, deepest dungeon possible to fend off the pesky heroes trying to capture Badman thus ending his quest for world domination. The user interface is simple; navigate the grid-like underground and press square to carve out a maze littered with monsters to impede the approaching heroes. Pressing the L button will quickly move to places of interest in the dungeon, and triangle will quickly zoom in or out of the playing field.

Constructing a dungeon is all about following the rules of Dungeonology 101. Mastering the laws of dungeon building is the only path to success. And there are plenty of rules to learn. For instance, you can only dig blocks adjacent to already carved out blocks, and the number of blocks you can dig is dictated by your dig power which will decrease until it eventually reaches zero. Some blocks contain nutrients that when dug will spawn monsters called slimemosses. Slimemosses are the building blocks of the dungeon and in addition to attacking heroes, serve to cycle nutrients to generate more and stronger monsters. On the other end of the spectrum, blocks can be filled with mana, and with the help of spirits will create magic based creatures such as liliths and dragons. The different type of monsters affect the dungeon ecosystem differently, and attack more effectively the varying classes of heroes, mages, knights, etc.

There are two main game modes in Invasion; Training and Story. Story mode follows Badman on his ultimate quest of evil as eleven heroes march to capture him. You are given one dungeon to build and protect the Overlord in. The story is broken up into chapters where 1-3 heroes must be defeated to progress. At the end of each stage you can use your remaining dig power to upgrade your army of monsters and are graded on your performance. The next stage starts immediately afterwards as you continue to lengthen your maze until the next party of heroes arrive. There is no real narrative to the Story mode, just Badman spouting snappy lines of dialogue or words of advice and the heroes shouting snide one-liners. Sadly, the Story mode is bogged down by problems primarily stemming from its excessive difficulty. There is no way to control monsters once they are born because they follow predetermined movement and attack patterns. The power of the invading heroes ramps up quickly meaning a clear strategy is necessary from the get go. Also the story is played arcade style so once Badman is captured it’s game over, forcing you to start from square one.

The only way to stand a chance in the story mode is to complete the 30+ missions provided in the Training mode. Other than teaching the basics and principle strategies of Dungeonology, the missions challenge with such objectives as creating a certain set of monsters within a set time limit or defeating a strong hero with limited dig power. Completing the missions is long and hard but ultimately satisfying. Many of the missions offer brain busting puzzles which inevitably lead to great “eureka” moments. More of Badman’s eccentric personality is revealed in the Training objective briefings than in the story.

I can’t stress enough just how much there is to learn about the ways of the dungeon. On top of a food chain there is also positioning Badman in the place in the dungeon where he is un-reachable to consider. Frustration sets in as you realize success depends on factors simply out of hands from the player. There is fun to be had though. Watching your monster army swarm and take down a tough hero is definitely worth the effort. The addictive quality of the gameplay comes through as the hours pass by and you are still attempting to overcome a tricky challenged or finally conquer the story mode.

Humor is a major focus of Invasion. Both Badman’s and the heroes dialogue are riddled with references to many facets of pop culture; from music to anime. Some of the jokes are gold (Gurren Lagaan references!) but some puns are cringe worthy (the Fresh Prince of Hel- Air?). The in-game almanac is another vital part of the experience. There you’ll find information on the heroes and creature types to encounter. The humor is likewise sprinkled into thee pages of the almanac and to miss out on its funny content is to miss out on some of the best Invasion has to offer.

Invasion’s visuals are unique like the rest of the game. The retro-pixilated style serves the title well but never impresses. There is a certain sharpness to the graphics thanks to the PSP screen. The same sprites are used over and over with only variance in color to highlight the difference. The soundtrack is enjoyable, reminiscent of great fantasy titles of the 8 bit era such as the Legend of Zelda. Voice acting is completely absent, but Badman and company do provide nice sound effects to keep the audio interesting.

If you have 40 MB of free space on your memory stick, this PSN exclusive download offers decent value. Frustrated gamers will likely give up before a couple hours pass, but those who become invested should squeeze 5-9 hours to complete the Training and Story. An Edit mode is also available where you can customize your own suite of heroes to try and conquer Badman’s dungeon. These heroes can be swapped with friends via ad-hoc multiplayer, but the fun it provides is limited.

I had high hopes for this game, and I came away from it mostly satisfied. When the difficulty and monotony mounts it can at times be hard to find a reason to keep playing. Still, there is enough inventiveness and personality here to warrant a recommendation to anyone willing and patient enough to earn a PhD in Dungeonology.