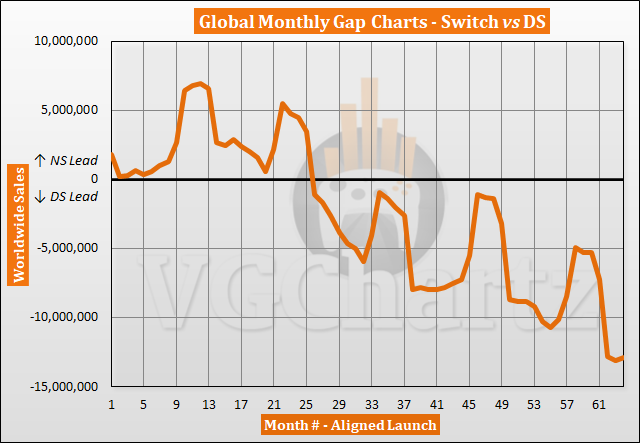 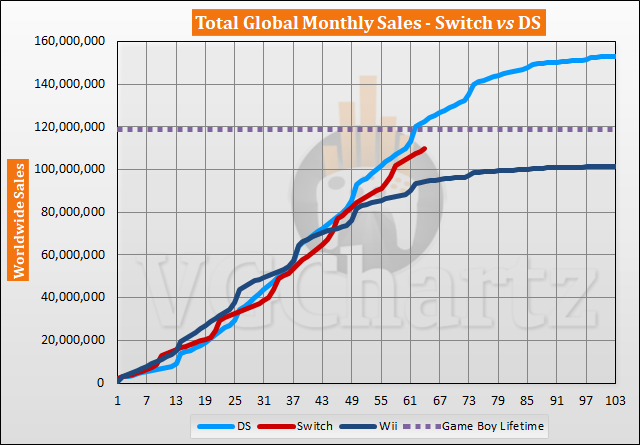 June 2022 is the 64th month that the Nintendo Switch has been available for. During the latest month, the gap grew in favor of the Switch by 221,192 units when compared to the DS during the same timeframe.

This looks really hard to Win for Switch, but we haven't received any New Console announcement and the soonest they have announced a new console is 5 months before (That I remember).
Some points of why I believe Switch can be the Best selling Console:
• Switch still has high demand and production problems
• Becase all the World problems and the last point, Next console has been delayed for sure
• Portable and Home games are in Just One Console now, nowhere to look for Nintendo Games
• No Price Cut or good mainstream Bundles yet
• No Direct competition and Japanese Market domination
• We still have Big games for this and next year

Time is definitely the switch's best weapon at this point. If they hold off for about 3 years, it'll be close.

But yeah, price drops and bundles could also push it along. Nintendo doesn't really do price drops much anymore though unless they have to. But at this point, they're probably happy enough keeping the profits high and letting the sales taper off.

Yeah, I actually really want the Atlan chip inside the Next Switch, that chip it's going to sampling in 2023 and a release date in 2025.

And yeah, hopefully they have a little more confidence in the switch 2. I'm impressed with what has been done with the x1 and happy with the switch. But it would be nice to have a system that can get ports without devs having to break their backs so much.

All that said, I have my doubts about Nintendo going with something so modern unless they can get a good deal on it. Or else we'd be looking at a price jump over the switch.

Yeah, it's the Nvidia Tegra chip for 2025. I really wish Nvidia be to one to push Nintendo to release Switch 2 with their newest chip for a good deal.

Most people (Including me), thinks that Switch 2 is gonna be $400, I would pay a lot more if I could get a better hardware.

400 certainly wouldn't bother me. They released the Wii u at 300 and 350. That was previously the most expensive. A lot of time passed since then though, so 400 might be likely.

But yeah, a little more future proof hardware would be nice.

The longer the Switch's livespan lasts, the better. I hope there's no talk of a new console until the chip drought is thoroughly over.

Same. I feel like it will be later than sooner, but it's really hard to say. These companies try to plan these things years out. So hopefully they didn't miscalculate.

The Switch needs to deliver a good blow for the next Q3.

140-145M is considered a lowball at this point. Nintendo is forecasting the Switch to sell 21 Million between March 2022-March 2023 putting Switch at 129M by March 2023. A reasonable drop off to 16 Million for FY between March 2023-March 2024 is likely putting Switch at 145M by March 2024, so the Switch will easily reach 150M+ in total. I have no idea why you keep expecting 18M for FY 2022 when all signs are at least pointing towards 20M for this FY. And 12M next year is way too significant of a drop off when BOTW 2 is releasing with no signs of a successor. Most likely Switch will hover around 155M.
The 3DS at this point in the DS's life was already announced, there are no signs of a Switch successor announcement anytime soon so Switch should be able to close the gap on the DS, which is around 9M when they have the same # of Holiday Seasons.

Do we still have 2027 and Beyond for the Switch Successor??

I haven't given 18M, and not for FY but calendar year. I am giving this calendar year 2022 - between 18 and 20M, why are you taking 18M ? I am giving range.
2023 calendar will be between 12 and 16 (depending on if successor is announced and if there is price cut). and 2024 and beyond I already said. And again don't look only the lowest number, I am giving ranges. between 12 and 16. If for example there is no price cut and with this the next switch is announced then I think Switch will finish at 12M next year. However if it's not announced it may do 14M or even 16M if there is a pricecut.

What numbers are you expecting if Nintendo releases a Switch Pro next year?

I don't expect Nintendo to release a Switch Pro. But if it does then it's again questionable because they may release it for 399$ or even more for example. Which wouldn't push so many sales as let's say if it release it for 299$ and price cut the other models. Then it will obviously has a nice boost.

With this year practically being guaranteed to be 20 mil at minimum, I don't see much reason to expect it to drop to 14 mil or lower next year, even if they were to announce the sucessor during 2023. The DS only dropped around 25 % in the year that the 3DS was announced and that was in the spring of that year. Obviously beating the DS is very far from a given regardless, but it mostly comes down to when the successor is announced/launches.