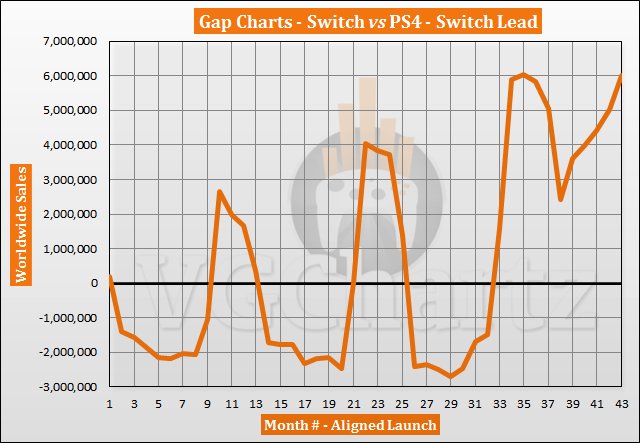 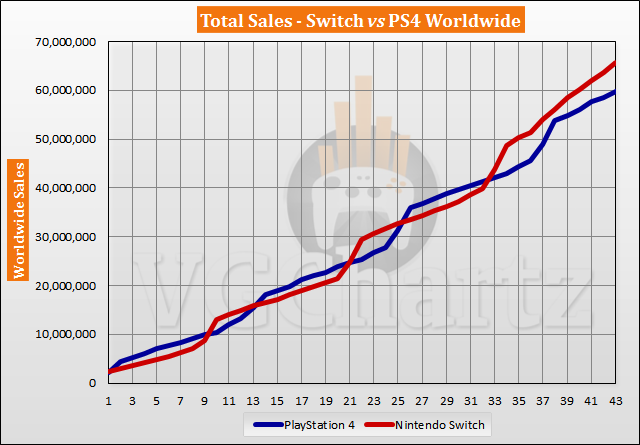 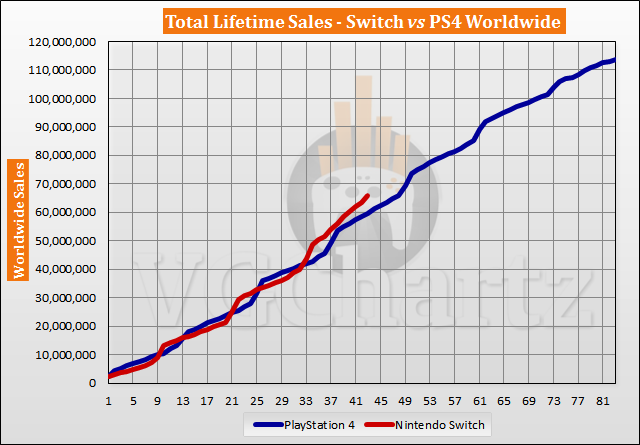 Unless Switch drops like a rock in water, I think we are safe to say this fight is over. Switch will win this gen.

Lets not say stuff like that and wait. Ps4 will end in about 120mill,only beaten by ds and ps1. Switch in march 2021 is going in its 4th year.

Given that there hasn't been a price cut made to the Switch yet, its seems likely that it will outsell the PS4. Also, let's keep in mind that Nintendo doesn't have two platforms to support them anymore. Releasing a new console is always risky and so I suspect that Nintendo is going to milk the Switch for everything they can get before retiring it, like they did with the 3DS.

So what you're saying is, the Switch still might fall off a cliff?

And this is before the holidays hit for Switch.

Looks like the Switch has its largest lead of this comparison thus far. Will likely pass 7 million with next month. And 12 million by the end of the year.

At this point - and under considering the upcoming months - I think if's pretty unlikely that Switch will ever lose the lead again. I wouln't have thought that a year ago. Ongoing pandemic and Animal Crossing really changed the whole game...

Damn 5 months ahead. The switch is just a beast. I hope it sells over 30 mil this year and becomes the best selling console in history down the line.

Switch is about to deal the PS4 a massive blow in this race this holiday season. Tough to see the PS4 come back but Sony always have longevity on their side..

People are really sleeping on Sony ... Big mistake. Sony for the most part is looking to start of this 9th gen correctly. Well besides their stupid Japanese censorship at the moment. History shows when Sony starts off correctly they tend to dominate that said generation. Nintendo Switch is over taking the old champion the Sony PS4 quite easily ... to be expected ;). Sony PS5 is right around the corner and Sony is out for some blood. This fight has only just begun ;")

the difference here is pretty much EVERY major console maker is going about it the right way for the most part. we've never had this since the SNES.

as for the ps5, im not sure how much it has to grow compared to the ps4, it only did that well becasue it basically had no competition, plus at this point the japanese market is a big L for them. bigger more powerful console japan does not want.

This comparison is launch aligned

Currently I can't imagine that PS5 can make 300k - 400k weeks like the Switch in year 4. Microsoft will be a much better competitor next gen who shares about the same target audience – and Nintendo is also big in the market. This will be a tougher fight for Sony than it was with PS4/XBO/WiiU, although they have two consoles right from the start.

Don't say I didn't warn y'all. People really seem to forget what Sony does when they start off a generation correct. But I don't know anything I guess ¯(ツ)/¯