In just a few years, VR’s popularity has grown at an exponential rate.  It's something I didn't pay attention to until recently—the change primarily due to Oculus Quest.  Despite being relatively new to the format, there are few better examples out there to ease myself into it than Pixel Reef's Paper Beast.  Founded by veteran designer Éric Chahi, his team's focus on heuristic game design harnesses VR in one important way: being wholly immersed in the game world requires a nuanced way of considering the environments and its inhabitants.  And though this origami-inspired simulation/adventure title has some moments I'd like to put through the shredder, fans of such design ideals may connect with it on a deeper level.

Lost within the morass of server data a new ecosystem has erupted: “Paper Beast.”  You control a disembodied character, the first explorer to venture into this binary soup dump of Big Data.  As you continue forward, interacting with both the environment and origami-shaped animals therein, more mysteries are revealed about this technological lost world. 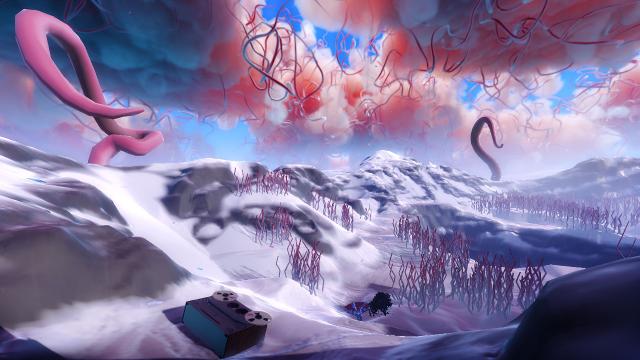 There's no narrative in the traditional sense here.  It's more proper to think of this as a quirky odyssey from one goal to the next, assisting the kinder wildlife all the while.  Even with that acknowledgement, I was still engaged to the series of events.  There are some memorable moments where the world's server code would corrupt the entire landscape, forcing creatures to adapt.  It has a techno-evolutionary ring to it: even within this simulated code there's a sort of natural selection occurring.  Perhaps I'm reading too far into it, but the fact that I think the team considered this is what I admire.

Even when transported from one world to the next, I felt a small attachment with the recurring cast of artificial wildlife.  It feels like you're in this together; how their disparate shapes and personalities accomplish something for both parties to excel forward.  There's also something to be said about Pixel Reef's interpretation of Big Data.  It's always been more popular to focus on the authoritarian aspects in the likes of Orwell or Observation, but Paper Beast displays this as a happy accident of sorts: a functional, beautiful simulation borne out of mismanaged 1s and 0s.

For whatever interpretation the slim story elicits from the player, there's enough there to feel substantial all the while.  Like some other artistically-focused games, the message can veer into pretentiousness; despite the flaunty behavior, its 4th-wall-breaking moments and subdued narrative beats are properly paced to keep your eye on the next objective. 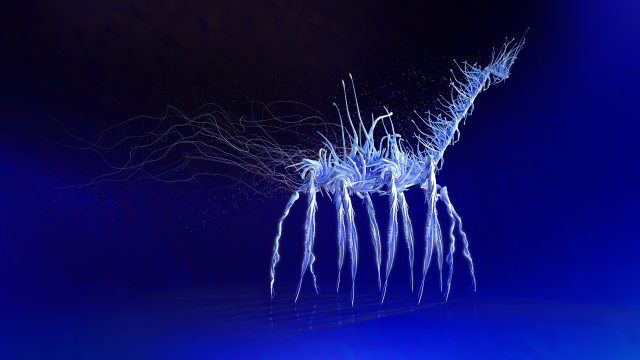 Visuals are a mixed bag of tremendous highs and sporadic lows.  The angular shapes of most creatures suggest a dedicated origami-craftsman spent precious hours getting the look of them just right.  The outdoor environments are oftentimes breathtaking, with my favorite example being the skyboxes; seeing orange-tinted clouds mangled with shredded paper pieces was a sight to behold.  Interiors or closer views of grand exteriors are where the limitations creep in for my base PS4's hardware.  Pixel Reef's visual artists aren't quite as able to cheat with harsh angles on surfaces as with animals.

Appreciating these graphics isn't limited to static images.  Since this is a world & creature simulation, interactivity plays a part in how you approach solutions.  With the right tools, you can create temporary dams to guide the game's goopy water in a different direction or build walkways on top of slippery obsidian floors.  Some puzzles incorporate weather elements too.  How these interlocking components flow together seems so hardware-demanding, yet I can't recall any framerate drops or sizable technical issues.

As with visuals, sound is another quality with some lows and great highs.  The soundtrack is split between Roly Porter and TsuShiMaMire: Porter handling the ambient electronic tracks and Mire incorporating a few j-pop/rock songs relegated to a gigantic stereo recorder lugged around in the game.  Although I enjoyed TsuShiMaMire's tracks the first time, I'm conflicted about the discordant duality it creates in the world.  I'm less conflicted about the fastidious sound design, however.  The binaural audio work sells you on this artificial world.  As an example: even when quickly turning my head I could catch subtle volume variations. 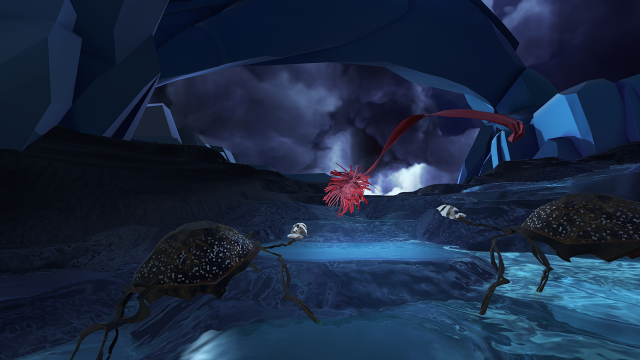 Paper Beast's gameplay requires some internalizing of a creature's purpose with the wider context around them.  Need to lure a troop of origami deer hybrids?  Pick up a paper wad and move towards your goal.  Such tasks are accomplished via DualShock or PS Move controllers.  Since I played with a standard DualShock, grabbing selectable items is focused on the R2 button (with up/down on d-pad moving it closer or farther away).

The first sizeable complaint comes down to the inconsistent quality of said puzzles.  As stated, I appreciate seeing Chahi's design ethos alive and kicking.  Getting nothing more than your controller's designated inputs leads to a greater demand in cogitating the creatures and world.  There will be some trial and error.  But what I dislike is knowing the solution and the game taking its sweet time to implement it.  The AI can be incredibly wonky, both enemy and friendly, so several animal-shepherding tasks felt incredibly tedious and unrewarding.  To avoid giving too much away: one later puzzle involving white-paper and multi-colored origami animals was terribly frustrating.

This can be compounded by infrequent mechanical annoyances.  Movement is reliant on click-turning (push left or right on the right thumb stick to shift 20 degrees or more) and teleporting to allowable locations with R1.  Although these actions are less nauseating than my experience with Separation, these impositions still feel constraining and slightly uncomfortable in narrower spaces; that said, perhaps Move controllers are a more natural fit.  There were also multiple random moments of my controller and PSVR camera being out-of-sync, resulting in the reticle aiming towards my floor despite the controller being in the default resting position.

Paper Beast's gameplay is a case where moments of successful puzzle-solving can leave you in awe while others make you grind your teeth to dust.  A modest amount of tasks have meaning and ingenuity behind them, and are slightly elevated by VR.  But as a cohesive whole?  It can sometimes feel like an expansive tech demo, with a creative story idea latched on.

The value proposition for VR games seems to be a bit more dynamic than standard titles.  For a $30 game, it likely hits the dollar-per-hour threshold as my campaign time fell between three and four hours.  Aside from that, a supplementary Sandbox mode allows you to play god by placing various creatures, items, and weather elements on a blank canvas.  It's enjoyable, if short-lived, entertainment.

Pixel Reef's freshman effort in VR is a kaleidoscope of wonder, surprise, and frustration of varying degrees.  Whether it's the Sandbox appetizer or the main course, there's a sense of more and better being just within reach but never realized.  Speaking as someone who's dealt with frustrating moments in games, Paper Beast has a few rare instances where my impatience simply got the best of me.  These complaints only distract from its successes as a distinctive dreamlike experience; but, as with most dreams, it can feel fleeting once you've snapped back to reality.

This review is based on a digital copy of Paper Beast for the PVR, provided by the publisher. 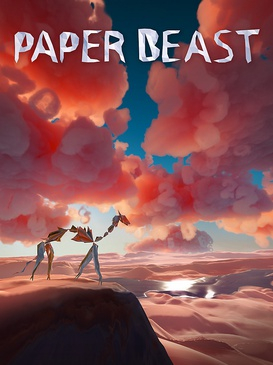