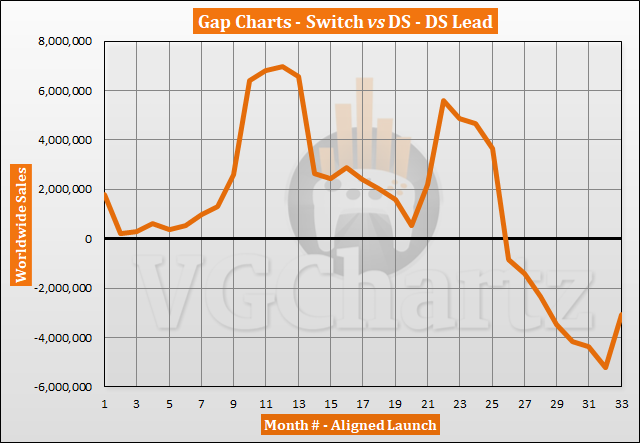 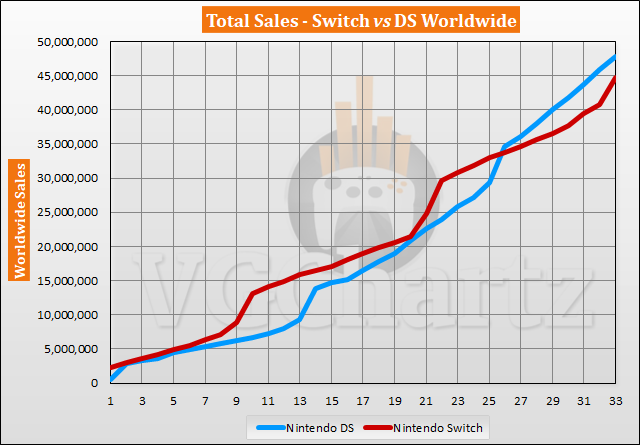 November 2019 is the 33rd month that the Nintendo Switch has been available for. During the latest month the gap grew in favor of the Switch by 2.14 million units when compared to the DS during the same timeframe. In the last 12 months the DS has outsold the Switch by 5.26 million units. The DS leads by 3.09 million units.

Nintendo DS sold 6 million units in the next 3 months, August-Oktober 2007, 4 more million in November 2007 and about 6 million in December 2007 (these are so amazing numbers...). So I assume Switch will take a lead for 3 month now, then fall back again and likely will never ever catch up again.

The Switch did incredibly well to stay in the fight for this long. But after this holiday season, I’m afraid this battle will be all over.

Pretty good that Switch is staying competitive with the DS. But the DS didn't really explode in sales until Holiday 2006 where it began selling an insane 30 million units per year. Unless Switch out of nowhere explodes in sales going into 2020 like the DS did (Which I Highly doubt), then the DS will leave the Switch in the dust

It would be kinda awesome if it did. I secretly hope one of Nintendo's consoles cross the DS lifetime

Considering DS sold over 150 million lifetime, I'd say Switch is holding up quite well.

When I read the title I was confused. Please correct it

Switch is fighting back. But this is going to be an insane uphill battle.

Nah, currently we see the effect of the different times the devices enter the holidays. As Switch has it's holidays, it can close the gap, but it will be brutal once DS reaches it's own holidays. If you look at the slow period for both, you see DS January/Feburary was much better than Switchs May/June. That says the Switch has no chance anymore.

in the best case scenario, switch's best periods of the year a.k.a. november - january the same as the worst periods of ds's sales which are in july august/february

If Switch catches up, it won't be until after the 6 year mark.

Yep, we're getting to the year where DS went from selling 20.7m in 2006 and then exploded to 29.5m in 2007, Switch will briefly overtake the DS after december, but when DS takes it back it'll never look back.

Compared to where the Switch is now, at this time in the life of the DS, the DSlite had been out for a year, and together with the freshly launched Wii, they were the talk of the town. Nintendo's "clean and white as an iPod"-look was hitting home with the entire planet, and in 2008 and 2009 combined they sold over one hundred million game systems.

If the Switch lite and Pokémon Sword/Shield can propel Nintendo to that kind of market position again, I'd be very impressed, but to start out with, just beating the DS -OR- the Wii individually would be a niceplace for the Switch brand to be.

Yeah, 2008 and 2009 had been absolutely unbelievable Years for Nintendo. I dont think any company in video game business ever (or lets say in the next 20 years^^) again will reach those hardware numbers with game consoles in such a short period of time. 100 million units in just 2 years was absolutely ... wow ... speechless^^