Monster Hunter: World was one of the most high profile games available to play at this year’s New York Comic-Con. The line to play the game grew quite large but the wait time was mitigated by the fact that four players hopped on the demo station at the same time, forming a party and simulating the experience of online cooperative play, with headsets to facilitate communication. 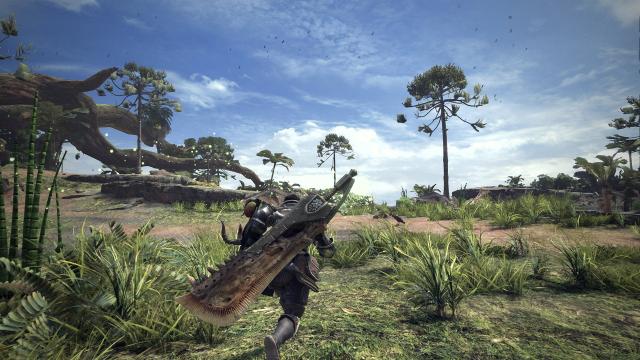 The demo started by having us select our weapons and armor. The appearance of our hunters seemed randomized for the sake of the demo. After preparing for battle our party focused its attention on two monsters during the demo level; Baroth and Diablos. In order to locate your target you have to follow its tracks. Swarms of Scoutflies - green luminescent bugs - help guide the way by signifying the footprints or other marks left behind by your desired prey.

Before long the trail of Scoutflies led us directly to Baroth, the smaller and weaker of the two monsters, so we focused our attention on defeating it first. During the course of our fight, Diablos made an unexpected appearance as well. At first it seemed as if fighting the two beasts at once would be an insurmountable task that split our team’s capabilities. However, If the two monsters were close enough together they would invariably begin to fight each other, causing massive amounts of damage to each other in the process. We used this to our advantage as best we could, but the creatures eventually tried to flee, so we had to take them down independently in the end. 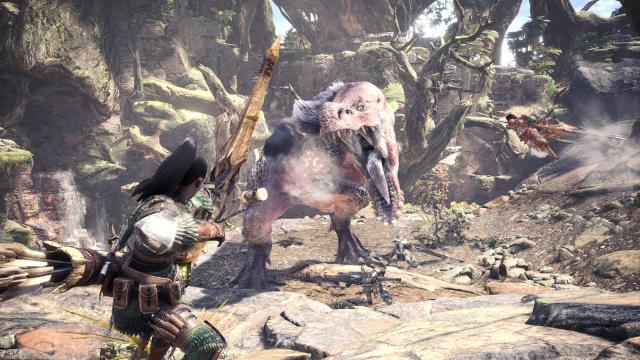 It is important to stay focused on your objective, because there are so many other things to take up your time. You can engage in fights with the smaller monsters in the area and scavenge supplies from them. You can also explore, looking for useful items, or just take in the beautiful scenery. During the demo I got a kick out of latching on a flying creature and swinging from it as it frantically tried to get away, although this distracted me from helping my teammates and took precious minutes away from the timed demo.

After first failing to be much help to my party with a heavy projectile weapon I decided to return to the tent and switch out my weapon for a Wyvern Blade. You have a whole host of other items at your disposal that you can use to make the monster hunting easier, including Barrel Bombs and Shock Trappers that you can place strategically around the battlefield to hurt your enemies. 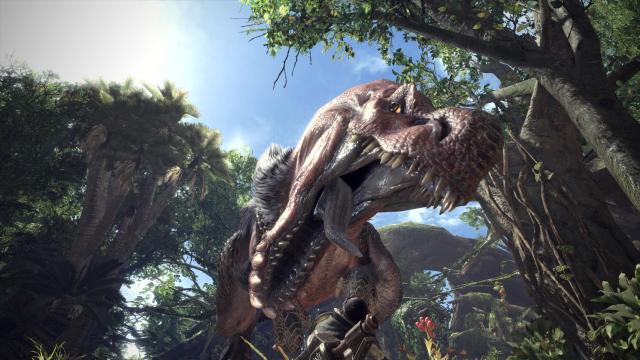 When you run out of potions to heal yourself with (which happened to me quite suddenly), Health Boosters that create a field that gradually replenishes the health of any player standing within its area, and these become vital to the survival of your party. In addition to your health you have to stay alert to the condition of your equipment. After my blade grew dull I had to use a whetstone to sharpen its edge on multiple occasions.

If you faint your character gets sent back to the nearest camp and will have to travel back to meet up with your party on foot, or fast travel to another campsite. You can fast travel to other campsites by bringing up the map with a press of the PS4 touchpad. If all of your party faints at once, however, you fail the mission and must start over. 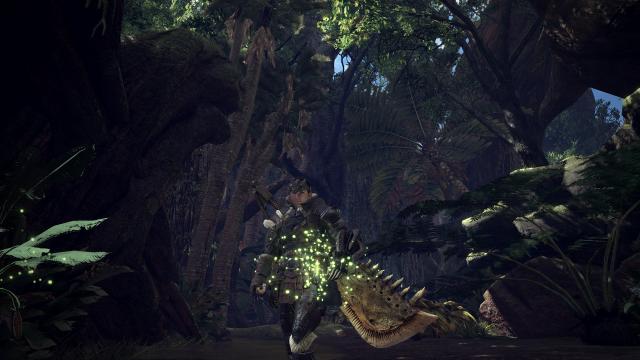 You can mount monsters and inflict more damage while riding atop them. As you repeatedly land attacks on monsters and drain their HP they will lose body parts, which serves as a marker that you are getting closer to slaying the beast. These occasions where they lose limbs and other appendages may manifest as a monster losing its horns or hardened outer shell. Knowing when to dodge attacks and when to get in close to deal some damage is also very important towards success.

There are many different types of weapons to choose from and it works to your advantage if your party has a balance of combat styles that complement each other. For example, our quartet of hunters consisted of one Heavy Bowgun that could fire from a distance, one Switch Axe that could land heavy blows as either a long-reaching axe or a swift sword, Dual Blades that can land a combo of attacks in quick succession, and a Great sword, which makes up for what it lacks in speed with devastating offensive power.  With more than a dozen different weapon types, the potential combinations and styles of play are extensive. One handy tool you have regardless of your primary weapons choice is your slinger. This can be used to hurl nuts or stones at enemies or objects in the environment but it can also be used as a grapple hook of sorts to swing from place to place. 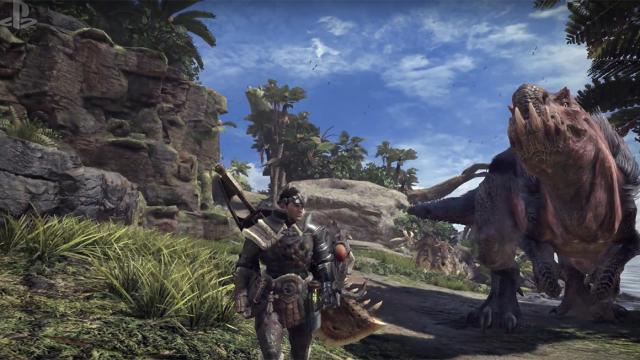 One major critique is that Diablos took way too long to defeat. I am not sure what stage of the game the demo took place in or how well optimized our characters were but the beast took what felt like an unreasonable amount of time to destroy considering a full party of four steadily attacked him. Diablos attacked by whipping his tail, charging head on, or burrowing underground only to pop back up and deliver a devastating blow. Sometimes he would burrow underground and leave the locale of the fight, forcing the party to track him down elsewhere on the map. This felt tiring and needlessly repetitive. Ultimately though it was certainly satisfying to finally fell the resilient beast.

Monster Hunter has appeared in HD on consoles before, on the PlayStation 3 and Wii U, but this is the first one that feels like it was built from the ground up to take advantage of the more powerful hardware and not just an upscale of a portable title. Monster Hunter: World boasts some lush environments and ecosystems. Within the demo alone we encountered wildlands with varied topography, ponds, caver and vines to climb up.

The animations are both fluid and vibrant, particularly those of the monsters you will be hunting. The music is appropriately grandiose for a game of this scope. It starts to swell dramatically when you encounter a large enemy, but even during more tranquil segments it provides a whimsical orchestral accompaniment to your exploration, and it looks like there will be a lot of exploring to do once the full game releases.

Monster Hunter: World will release on January 26th, 2018, for the PlayStation 4 and Xbox One. A Windows PC release is set for later that year.

If by unleash, you mean kill, then sure.

I wanted to get into the series, but it was a huge time sink.

Nice impressions. Are there any penalties for dying (like decreased awards)? Did players die regularly?