Things are Getting Political in White Paper Games' The Occupation - Preview

It’s been three long years since I first reviewed Ether One and praised it for its fantastic storytelling and ability to make you care about characters that weren’t even actually there. But while Ether One was a great starting point for indie start-up White Paper Games, the small team there have much more ambitious plans for their second title - The Occupation.

Set in 1980s North West England, in The Occupation you play as a whistle-blowing journalist who is trying to uncover the truth behind a recent terrorist attack which killed 23 people, and brought about a controversial new law called The Union Act.

I sat down with the game's lead developer and played through an early demo for about 15 minutes. The demo starts you out in an extremely detailed office, which acts as a sort of start menu/hub, and it's immediately clear just how much work has gone into the team's new project. Wandering around the office you'll see and interact with incredibly detailed objects, from an old school PC complete with floppy disk drive, to even the trash in the bin, which can be picked up and unwrapped to discover more about the world.

The office doubles up as a tutorial, giving you a good idea of how The Occupation will pan out; an adventure game consisting of mightily detailed environments, intricate interactions, and a strong focus on narrative and world-building. As positive as I was about Ether One, The Occupation is set to be even more beautiful and atmospheric. 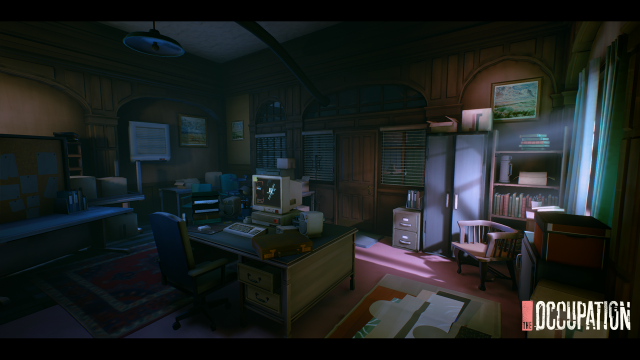 Proceeding from the office space and starting the game proper, you find yourself in what looks like a museum of sorts. Moving through the security zone, you interact with a security officer who behaves in a very life-like way; he'll ask for your suitcase so that he can check it in, interact with objects in the environment, and is well-acted and animated. It all comes together to quickly give the impression of a real, tangible world.

Once past security, you’re told you have a meeting scheduled for a specific time and where to go, but it’s entirely up to you whether you attend it or not. I used this opportunity to walk around the complex and take in the environment, but time management will actually be incredibly important in The Occupation when playing through it properly because the game works on a real-time clock - a minute in the real-world is a minute in the game. This mechanic has great potential and hopefully the developers are able to make good use of it. It reminded me a little of the time mechanic in Majora’s Mask, allowing the player to take part in scripted events at certain times. 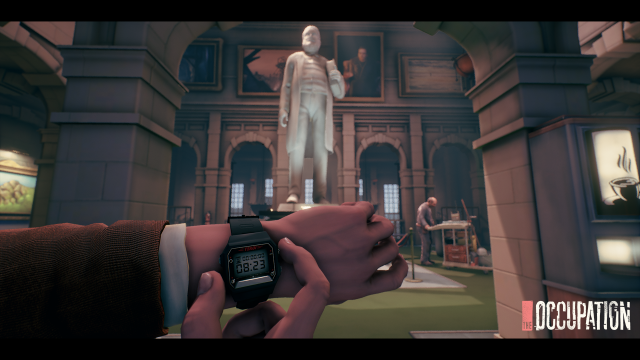 The AI is also a highlight. Take, for example, the museum's cleaner. He will actually carry out his tasks in full, so if you want to you can follow him around the complex and appreciate the fact that he'll empty each and every bin. You can even mess up his routine by, say, placing objects in the bins and accessing his cart while he's distracted.

Once I had finished exploring I made my way to the meeting's location on the second floor of the building and advanced the story a bit. A showfloor isn't exactly the best place to experience immersive storylines, but what little I did see looked good and the entire demo has me excited for The Occupation's full release.

Loved Ether One so I got my eyes on that one!

Interesting how half the article focuses on the game 'improper'.