It’s been 18 long years since the original Banjo-Kazooie hit the N64 back in 1998. During that time we’ve seen the traditional platformer go from the most prominent, almost default genre, to the underdog of the industry, to a resurgent force. And now, thanks to new funding methods like Kickstarter, developers who still wish to recreate traditional platformer experiences are able to do so with financial support from fans.

Yooka-Laylee is, of course, one such game. After having secured over £2 million from backers on Kickstarter, Playtonic Games, which is mostly comprised of former Rare employees, set about creating a true successor to a game that many have wanted to return to for years. Yooka-Laylee is now taking shape, as evidenced by the fact that it was possible to play an early version of the game at this year's EGX. 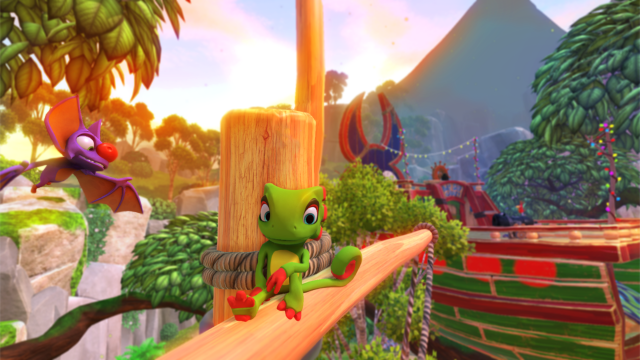 The demo starts off instantly putting you in front of a slippery slope that can only be navigated by pressing and holding the right trigger, which turned our duo of characters into a ball and gave them a boost of speed. This is familiar, if not taken directly from its spiritual predecessor (Kazooie’s legs were used for slopes and sprinting challenges back in the day). Similarly, the duo is able to spin attack enemies, glide, and double jump.

All pretty standard for a platformer, but it’s the iguana’s ability to eat different flowers and, as a consequence, gain new abilities that mixes things up. During my time with the game I came across a number of platforms that, for example, had to be stopped by firing an icicle projectile at buttons spread around the world. This novel way of adding new abilities of your characters should provide plenty of opportunities for the development team at Playtonic to introduce varied platformer challenges.

The duo genuinely feel like a delight to control, which is vital for any platformer. I was able to put the game through its paces in that respect - the demo has you scaling multiple platforms and completing a number of different puzzles - and am happy to report it's coming along well. 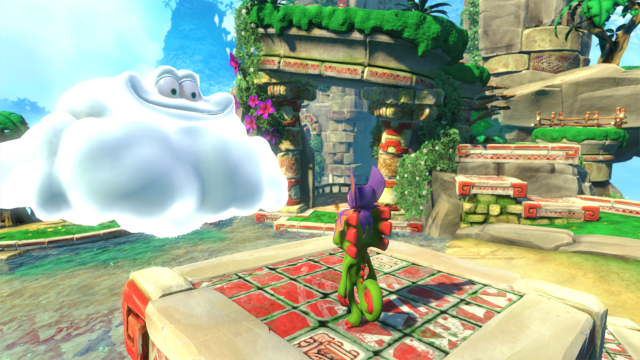 Exploring the world you’ll come across characters that are just as unique and memorable as those found in Banjo-Kazooie all those years ago. The trouser snake 'Trowzer' was brilliant to talk to, with his fitting accent adding a series of s's to almost everything he said. Then there’s the pig-knight 'Sir Scoffsalot', who was just as amusing as his name implies. One thing's for certain, Yooka-Laylee should feature plenty of memorable characters.

Enemies are easy to kill, but varied, with some being stronger due to their 'armor', requiring multiple blows before they are defeated. Getting hurt will cause you to lose one of your many butterflies of health, but these can easily be recovered by finding a butterfly on the course and pressing the B button to eat it.

The demo that I played had plenty of stuff to collect as well. It's obviously early days, but the demo included the following collectibles:

There may have been more, but in my limited time with the game this is all I managed to find. It seems that the Pages are akin to Mario’s Stars in Mario 64. They’re gained by completing tasks for people or after successfully navigating puzzles found in the world. Time will tell exactly why you’re collecting them - it wasn't made apparent in the demo - and what the reward for doing so is. 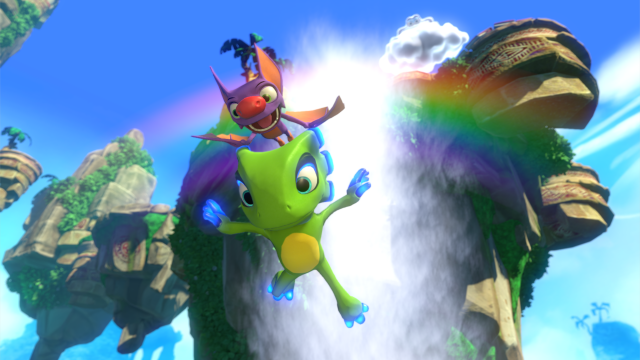 It should be noted that the game looks gorgeous. It feels like the art department was able to really unleash its imagination on this generation's hardware and the amount of polish on display was almost unprecedented for a Kickstarter project. Yooka-Laylee at times looked like a piece of pre-rendered footage, taking on a kind of Pixar quality in terms of visuals. I only hope this remains the case come the game's actual release.

Yooka-Laylee doesn’t really bring anything radically new to the platformer genre, instead it looks like it'll be a fantastic call back to a time when the genre was at its zenith. Playtonic's sense of humour and adventure should also make it a fun and entertaining experience. I certainly enjoyed my time with Yooka-Laylee's demo, but time will tell if it's truly representative of the full game. If it is then fans have good reason to be excited.

Please be as awesome as you look like you will be.

I long for this game so much!!

This game will be MINE !!

can't wait to play and hear the music!

My most anticipated game of next year! Can't wait!