The Xbox timed exclusive Rise of the Tomb Raider sold 301,028 units first week worldwide at retail, according to our estimates, which can be viewed on the VGChartz Global Weekly Chart for the week ending November 14th. 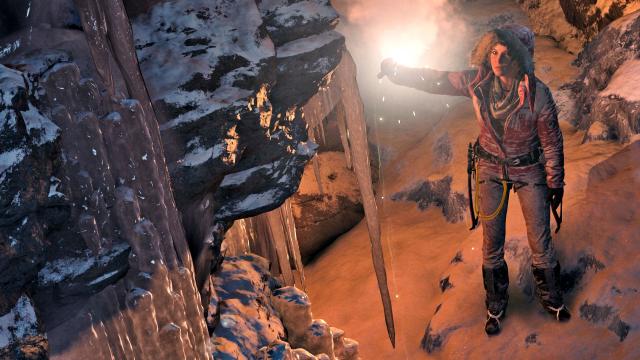 Rise of the Tomb Raider launched on November 10th in North America and November 13th in Europe for the Xbox One and Xbox 360.

I think the Xbox numbers are what you should be comparing it to. It some 480k units FW on 360, so RTR is still down from the last game, but it isn't AS back as an all-platforms comparison makes it seem. I would blame the poorly timed launch, and just disastrous PR/marketing leading up to release for these disappointing numbers. Seriously, who's idea was it to prematurely announce the PS4/PC versions? And launching alongside Fallout 4? WTF?!

Hopefully the game has decent legs, but really. What a screw up.

The sad part is that you're comparing two totally different situations. When it released on those systems they both had over 60 million units each in hardware sold.
Xbox One has, maybe, 20 million sold. And Microsoft have said Xbox 360 sales have plummeted because of the new hardware. So you're comparing a game released to 120 potential customers and you're not looking at it from the side that is currently only around 16.5% of what it was last generation. Why did you look at it the way you did? Because you're a fangirl.

And you know what's funny about your comment? That you clearly didn't read this article properly. Othervise you would've noticed that it says RETAIL SALES. With digital it would probably get closer to 600 -700k making it quite a success (and don't tell me it's not true, because Vgchartz has 200k copies sold for Starcraft, and it's widely known that it has sold well over 1 million digital copies in 24hrs).

So, saying it in simple words for you, NO, IT DIDN'T FLOP ;)

Haha well Square that´s what you get if you discard the platform which roughly 66% of your fans own, I hope Sony releases Horizon on the same day as Rise of the Tomb Raider on PS4 as a gentle way of saying fuck you Square Enix you backstabbing bitch.

To be fair it was a terrible deal, however SE were in the financial mire at the time. Hopefully they never do this again.

I wonder how happy SE and MS are with these numbers. Releasing this game on the same week as Fallout 4 probably wasn't helpful either, and considering that the previous game needed to sell 6m copies to be considered successful by SE I think it'll take a while for RotTR to even break even.

I have a XBox one I like the Tomb raider franchise but I didn't buy it, fallout, star wars, I dont have infinite money. Tomb raider seems like a nice "pre owned" or "on sale" single player experience I will pick up later.

The sales are pretty meh. Only legs can help it from here on out.

Disappointing number even for Xbox One/Xbox 360 Only release, Only holiday season will help it.

SquarNix: "Fallout 4 will not hurt our sales"

Hope square was paid ridiculously well to make this an XBOX exclusive otherwise this is a train wreck....

Now that is what we call a BOMBA.

They wanted something to compete with Uncharted 4, they would've sold more units if they launched on the same day as Uncharted 4, hopefully word of mouth/YouTube/twitch can give this game some legs or the entire point behind getting it delayed on other systems really didn't help Square or Microsoft. Mostly Square.

Despite this saales the game is pretty '' meh '' Imo.

I just hope SE was well paid for the mistakes they did.

M$ shelled out $10 million for the exclusivity deal. I imagine, they're not sweating it too much right now. It'll sell even better in a year :P

We told them they were crazy to launch it alongside Fallout 4. Did they hear? Nope! And there you have the result.

Microsoft were overconfident in the game appealing to a different sort of gamer based on fallout being a different genre...i believe however they have a similar appeal. I for one want both badly...but the nature of fallout being so huge and time being ltd means tombraider will have to wait till the ny, being cheaper then is also a bonus. Stupid stupid microsoft.

Well that flopped miserably. I hope they make it back on PC and PS4.

This game should have come out the same day as Uncharted 4 and not Fallout 4.

Would have done very little on PS4 and, roughly, the same on the Xbox consoles. Thus, no, that probably wouldn't have changed much.

It's only on two systems so far but still, those aren't very good numbers :(
Then again that's what happens when you release on the same day as Fallout fucking 4!

Or when Microsoft pays you a stupid amount of money for a year long exclusivity deal... Just saying.

This would be a disappointing number if the game was released with nothing else really competing. But I wonder if SE and MS altered their expectations when November became rather oversupplied with new releases.

Dude, it was Microsoft's fault. They set up the date, and the exclusivity deal. They're bastards, hoping ANYTHING will give them a one up on Sony, but they shot Crystal Dynamics in the foot instead. If this was multiplatform, it would have sold just fine. Uncharted Remstaers even sold over double this number.

I didn't expect millions like some, but I expected more than that. Will Square Enix actually be worse off than if they hadn't sold out? We'll never know.

Hmmm, if only this was multiplatform. Maybe it would have sold better. Guess Crystal Dynamics doesn't mind a whole lot, since M$ lined their pockets with 100 million first. Greedy, stupid business.

Why does it bother you about business decisions? If you want to play TR buy an X1, no one is holding your hand back from making a purchase. Business is business.

MS paid just over 10 million, not 100 million. Where dis you get that figure? or was it a typo?

I haven't played the game but it's apparently excellent. Maybe with word of mouth this game will have legs but you can't hide from the fact that these numbers are poor. I thought Halo 5 had poor sales in the wake of Fallout and COD but these Tomb Raider numbers...sheesh! Crystal Dynamics will never sign an exclusivity deal with Microsoft again.

Lol at that someone thinking Xone sold 20M.

Yes, that is a paltry total, however, not surprising when Fallout sells nearly 2.4 million between XB1/PS4 in North America. I really enjoyed the last one and I hope that it has steady sales and does well.

Not great. I wonder if the roughly 10 million SE got from MS is enough to offset these relatively low numbers?

You're right, I've fixed them. Not sure how Will managed that!

Sad start for the game. I hope the developer still has the drive to make the PS4 version spectacular since I for one would like to play this. And I hope that the games industry has learned the lesson: You do not create more value to some by blocking the others.

It will be interesting to see what the sales figures are when it finally hits PS4.

Still just waiting for the immanent 'Oh.. yeah... its coming to PS4 as well' statement.

Told them, the deal was bad idea, this is what they get sale without PC & PS4, even worse thing is release date is a bad time because of Fallout 4. So, overall.. Should've been released this late December with multi-platform PS3/PS4/XO/X360/PC.

Out of curiosity, I looked up every "major" exclusive released on PS4 and how those did week 1, and just about every one of them has done better, most by a significant margin, even titles that weren't reviewed very well such as The Order. The only exception is Knack (unless you count the odd sales spike when it was finally released in Japan, likely due to a bundle).

That being said, it's pretty common for games released during the holidays to pick up steam as we get closer to Christmas, especially given the crowded release window it had. It'll probably sell respectably well by the year's end, though I suspect it won't make its money back (or, turn a profit) till its release on PS4.

Those are not great sales but fairly reasonable for being on only consoles. Would be interested in a breakdown of retail vs digital s as less since there was a big too about this selling only 100k on physical

Not bad, probably end with 1m on X1 and 500k on 360 physically only, and again not including digital so not a bad effort. Loving the game btw.

that is the best case scenario and still fall behind compare to the reboot at 4m. the worst part is that the game isnt a system seller which is one of the reason MS threw out money.