by Stephen LaGioia, posted May 24th

Music games are coming back in a big way this year, if E3 is any indication. The kings of the genre - Guitar Hero and Rock Band - are both getting new entries after a near half-decade of absence, in the form of Guitar Hero Live and Rock Band 4. Interestingly, both are taking a back-to-basics approach, with Guitar Hero returning to its single guitar approach and Rock Band returning to the classic guitar-vocals-bass-drums combo (no keyboard, a la Rock Band 3). I decided to check out both music games on E3’s show floor to determine which is the rhythm game to beat this year.

First up was Rock Band 4, which has eschewed the excesses of Rock Band 3 and has gone back to the original simple line-up of guitar, bass, drums, and vocals. On the surface, not much has changed, especially on the drum and bass which play exactly the same as they have since 2008. The guitars, however, have received a new freestyle soloing mechanic, with individual notes being replaced by blue and orange streaks, with the blue representing the “lower” notes (closer to the guitar head) and the orange representing the “higher” notes (the five extra buttons closest to the guitar’s body), “suggesting” to players the range to stay in but otherwise giving them free range to “improvise” solos. 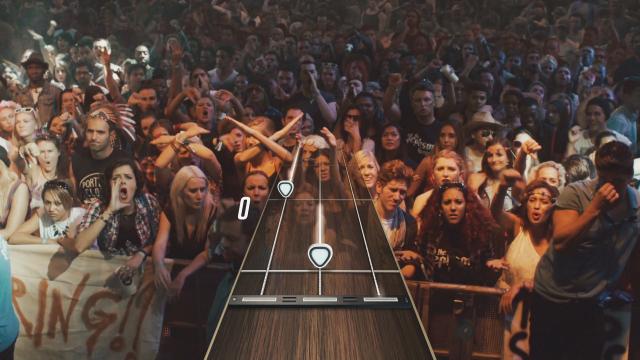 As something of a musical purist, I’m not sure about this mechanic - half the fun of Rock Band and Guitar Hero for me is the challenge of trying to nail difficult solos from my favorite songs, so I hope this mode has the option of being turned off in the final release.

I was most surprised by Guitar Hero Live and its new guitar controller design. Instead of the classic controller design of five buttons lined up horizontally along the guitar neck (the design kept for Rock Band 4), the new Guitar Hero controller now has six buttons, but aligned to three “frets” with two buttons per fret lined up vertically. Below is a crude drawing attempting to illustrate this change. 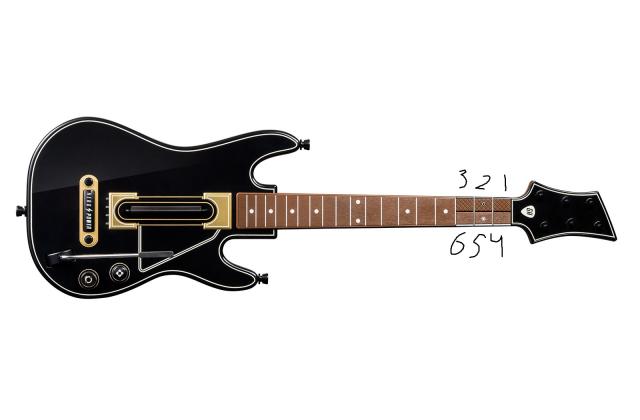 If you felt confused by my attempt to explain this concept, then please understand it is almost as confusing in practice as well. After years being conditioned to play plastic guitars one way, transitioning to this new style - not only moving up and down the neck but jumping “strings” as well - is disorienting.

That said, as a guitar player, I was surprised at how much more like actually playing a guitar this felt. That extra bit of verticality added the dynamism needed to make these plastic toys one step closer to feeling like the real deal. Ironically, Guitar Hero Live’s decision to incorporate live action footage (instead of 3D models, a la Rock Band and previous Guitar Hero games) in the background actually took me out of the experience, but it’s easy enough to ignore while focusing on the music. 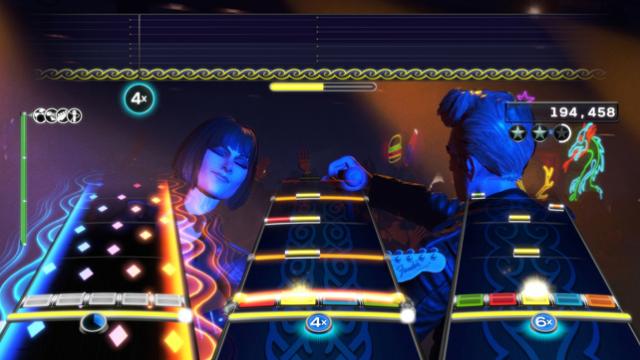 So, which music game “won” this year’s E3? To be honest, both were unique (and fun) enough to wholeheartedly be recommended. Rock Band 4’s backwards compatibility with instrument peripherals and DLC songs from the previous generation makes it an easy point to jump back in for lapsed fans, while Guitar Hero Live’s new controller is fun and answers criticisms of the series being unwilling to change.

I’m a little bummed that, due to Guitar Hero’s controller change-up, neither series’ guitar controllers will be compatible with each other, but both seem to be offering unique enough experiences that they will be worth checking out when they launch later this year - Rock Band 4 on PS4 and Xbox One, and Guitar Hero Live on PS4, Xbox One, Wii U, PS3, and Xbox 360.