Dishonored is a fast game. It begins quickly, moves along quickly and ends even more quickly. Indeed, the most fun you can have with the game is when you get it to slow down. The game is over before you know it, but it’s an incredible experience while it lasts, and it leaves you wanting more. 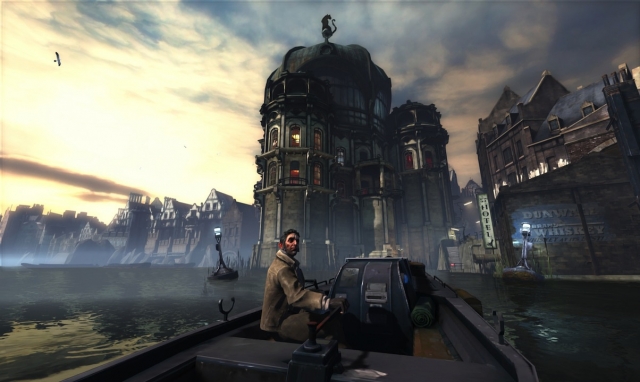 You play as Imperial bodyguard Corvo Attano, and you have a peaceful existence for all of five minutes before the Empress is assassinated, her daughter is captured, and all hell breaks loose as you are arrested by the High Overseer, the very man who arranged the assassination. Fortunately for you, however, a band of rebels called the Loyalists, led by Admiral Havelock, help you to escape from prison and set you to work eliminating key targets so that Lady Emily, the heir to the throne, can be helped into power.

Thrown into the mix is a mysterious character known as the Outsider, whose mark allows you to use special magical powers. The Outsider is fascinating, which makes it highly disappointing just how little he is used. He shows up near the beginning of the game, and at the end, and whenever you find one of his shrines, but the issue of his actual identity, his origin and his powers are never given anything resembling closure. He is an enormous wasted opportunity and is only one of the many things that make me hope that Dishonored gets a sequel.

The fascinating thing about Dishonored is that, despite the fact that you are ostensibly a hired assassin, you can go through the game without killing a single person, including your assassination targets (whom you can dispose of by other means). Alternatively, you can go through sword gleaming and pistol firing, and destroy any guard who stands in your way. But to do the latter is to almost completely ruin your enjoyment of Dishonored: the fun is in the stealth, in sneaking up behind guards having noted their movement patterns, in finding secret passages that let you bypass heavily guarded areas entirely.

That’s not to say, however, that the combat is not enjoyable when it is required. Your primary weapon is your assassin blade, which is invaluable both for stealthy assassinations and full-on swordfighting, unless of course you are trying for a nonlethal playthrough. Parrying at just the right time staggers your opponent and allows for a one-hit kill, which adds a satisfying element of skill to melee combat. However, you will quickly die on even the easiest difficulty if you rely on this method. Even if you connect the parry every time, your enemies surround you, and even pull out pistols to fire at you. To make things easier, you have a pistol of your own for sticky close-combat situations, and a crossbow that can take enemies out at a much greater distance when properly aimed. Springrazors serve as traps that cut unsuspecting enemies to pieces, and grenades can take out groups of hostiles with a single blast.

Much of the fun of Dishonored, however, comes from magic. Windblast knocks your enemies backwards and is excellent for gaining the upper hand in melee combat, whereas Devouring Swarm occupies your enemies with a plague of rats while you make your escape, or attempt to kill them before your own rats eat you alive. Bend Time gives you an enormous advantage by effectively speeding up all of your moves relative to your opponents. It is nearly impossible for them to parry your attacks with this power active. As satisfying as these are to use, even though I was making no conscious attempt to be nonlethal I didn’t find myself in close combat situations very often. I imagine these powers would be used more on the higher difficulty levels. 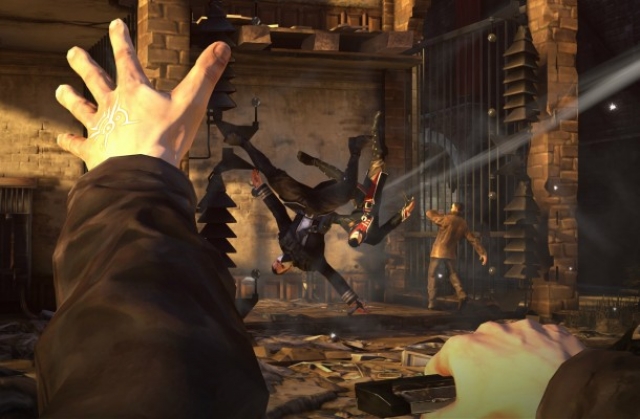 To provide some balance, three of the powers are more geared towards stealth, and I found myself using these much more. Blink is really suited to any play style, but where it is simply useful when you are seeking action, it is invaluable if you are trying to play furtively. It allows you to quickly traverse distances and climb up buildings, without being seen by any guards who are on duty. It is just about the only thing in the game that you will have to use irrespective of how you choose to play. Indeed, your magic bar is set up so that if you empty the bar and have no elixirs remaining, once the brief regeneration has completed, you will have just enough to use Blink once. Dark Vision allows you to plan ahead by allowing you to see enemies and their view radius even through walls. Possession turns out to be a rather underwhelming ability. You can only possess humans once it has been upgraded, and even then all you can do is walk around, pull levers and open doors. Possessing rats and fish is useful in a handful of highly specialised situations, but not otherwise.

Powers are obtained and upgraded (once only) with runes, which are found scattered through Dishonored’s nine levels as well as the Hound Pits Club that serves as your base. They must all be found, except for one that you purchase from vendor Piero, who also sells upgrades and equipment in exchange for money that miraculously appears when you pick up miscellaneous objects. Finding them is one of the best parts of the game – they are hidden in hard-to-reach areas that often involve Blinking, bypassing guards and making use of the environment (such as one that requires you to board a wagon on a rail). Similarly scattered are the Bone Charms, which give you passive abilities such as faster choking or increased healing from Health Elixirs. Only a handful of these can be active at a time.

In an interesting move, practically everything you use in the game is available from the second level onwards. At that point, you have enough runes for at least the first level of each power, and you have every weapon and plenty of ammunition for each of them. It’s true that you purchase upgrades to your weapons and powers, and gain bone charms as you move on, but for the most part you are using the same tools in increasingly difficult situations, and the effectiveness of this technique makes one wonder why it is so rare in modern games. 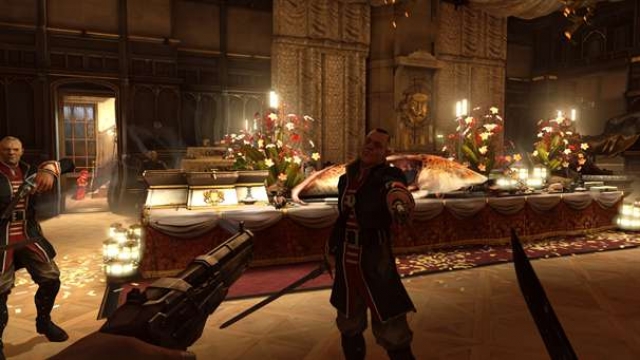 A big part of the game’s marketing was the ability to take multiple approaches to getting through each level. It is certainly true that you can choose not to kill a single enemy, but the levels are often rather linear, other than occasional diversions to find runes and bone charms, or complete bonus objectives (few and far between). Within these linear levels is some scope for making your own way around, helped enormously by the Blink power which really allows you to move in all three dimensions, but a far greater variety can be found in approaches to gameplay: stealth, magic, full-on combat, secret passages, whatever suits your mood when you are playing.

The story starts off promisingly, and has some excellent moments, such as the candid conversations that you hear between characters that voice their concerns and opinions of the world, but ends abruptly and unsatisfyingly. The game promises that your level of brutality affects the ending, but there was scarcely anything to affect other than a minute-long cutscene voiced by the Outsider. Books are found lying on shelves and tables throughout the game, but these seem to describe uninteresting details as often as they give genuine insight into the game’s setting. At its best, it feels like Rapture, a half-forgotten world filled with fascinating history, but too often you are simply reading about methods of preparing whale oil, or books about architecture.

The game’s visual design is excellent, with highly detailed environments conveying a sense of bleakness caused by the Lord Regent’s tyrannical regime. For the most part, voice acting is very well done, but occasionally the intonation of a line is completely wrong and ends up ruining the effect completely. Furthermore, there are disappointingly few well-explored characters, and due to the brevity of the game even they hardly get a chance to say anything. Corvo remains silent throughout the game, but his relationship with Lady Emily really helps to personify him better than most mute protagonists. Still, though, the game would have benefitted enormously from being double the length it currently is, and from including enough conversations with each of the characters (especially the Outsider) to let you really form an opinion of them.

A longer campaign would have been welcome. It will take about eight hours on a reasonable first attempt, provided you neither sprint through each level nor explore every alcove and reload until you finish each level without killing anyone or being spotted. The latter provides an enjoyable challenge for anyone who has beaten the game, but you won’t be anywhere near good enough during your first playthrough, and besides, it forces you to ignore half of the tools at your disposal. For an even greater challenge, disable your heads-up display (and the objective markers that go with it) or go through the entire game without using your weapons, or your magic. The different play styles are so distinct that this is genuinely a viable source of replay value. 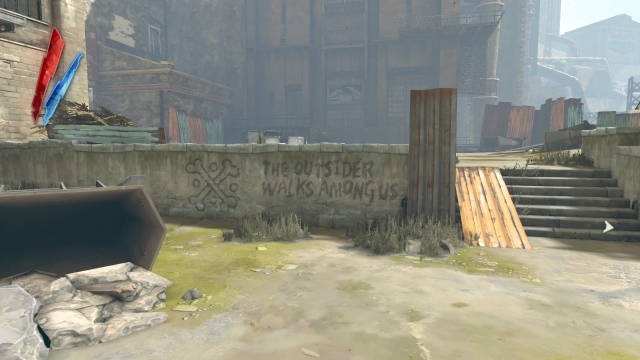 Dishonored is a curious game, because at the same time I love it, and can’t help but feel somewhat disappointed by it. Stealth feels fantastic, and close combat is visceral and satisfying and requires genuine skill. The world around you is darkly beautiful and filled with elements of reality like casual conversations between the guards whom you realise are only doing their job and often feel little sympathy for their cause. There is a hint of a fascinating backstory, but all that is ever clearly presented to you is a very basic plot with a twist visible from a mile away. The first few levels are sprawling and open, with a variety of genuinely distinct options, but the final level is embarrassingly straightforward, and the whole thing is over very quickly and gives no closure whatsoever.

To summarise, it’s enormously enjoyable while it lasts, and you won’t have a single complaint to make whilst you’re actually playing. But looking back, you see just how much better it could have been: the gameplay of Dishonored with a properly formed storyline leading to a sensible and satisfying conclusion would make for one of the best games of the generation. As a game, it is almost without equal, but as the interactive storytelling experience that I hoped it would be, it falls a little short. Even as it stands, however, Dishonored is outstanding in its genre, and I can fully recommend it to anyone seeking a stealth game with a difference.