Take a look at the most popular games of current times and you'll see some commonalities between many of them: dark, gritty realism with gory violence and guns blazing. Many people enjoy video games with those traits, but not everyone. Some people may have grown tired of this trend and wish for something completely different; a carefree, colorful, happy-go-lucky experience that tugs at the heartstrings and gives players that warm, fuzzy feeling. If you're one of those people, Tearaway is the game you need. It's a 3D platformer by definition, but in practice, it's truly a heart-warming, artistic adventure with an interactive video game as its choice of medium. 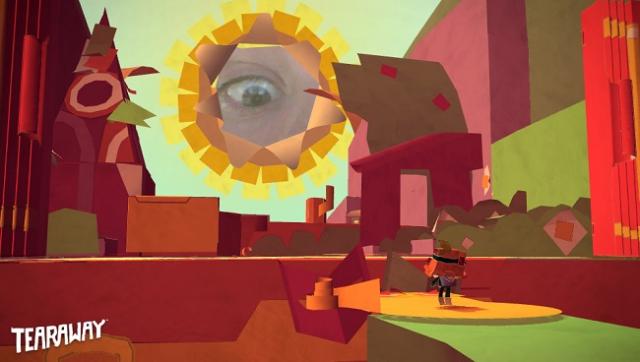 Tearaway tells the story of either Atoi (female) or Iota (male), two messengers with letters for heads. One day, the face of the Sun opens up to reveal a creature known as a You, which is actually you the player, captured by the PlayStation Vita's camera. It becomes the messenger's goal to deliver his/her message to the You in the sky in an effort to bridge the gap between their world and our own. On the way, two disembodied narrators guide your messenger through colorful hills, scientific laboratories and seaside villages. It's a simple, yet charming narrative, putting you into the game as the You and teaming up with your little messenger on their journey to the "real" world. If you don't feel even a little bit emotional when it's all said and done then you must not have a pulse.

I keep mentioning how colorful Tearaway is, and that's not because I don't know how to use a thesaurus. The world is made entirely of polychromatic paper craft art and is a total joy to move through. Gusts of wind visibly move through as curly pieces of paper, grass is represented by strands of paper, and critters are composed of elaborate paper craft, just to name a few. It's a style that makes Tearaway a joy to play through as you watch the environment flip, roll, and tear to reveal a world full of life. 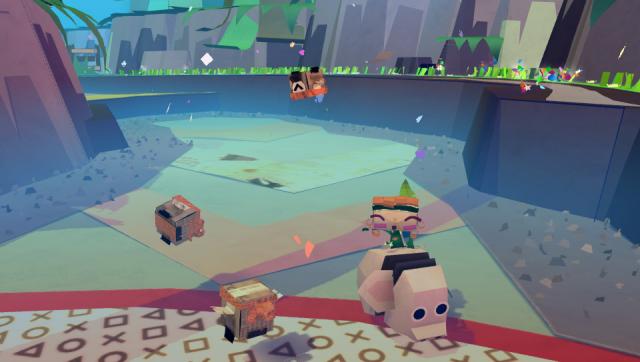 Adding to the artistic visuals are the charming music numbers and sound effects. The soundtrack contains examples from several different genres, such as folk music and electronica, to further engross you into the world. The music can be affected by your actions in certain levels, such as tilting the Vita in different directions to change the speed of the song. It brings out a wide variety of instruments to create appropriate background music for your adventures; playful in the fields, bizarre through the underground labs, and heroic as you climb mountains. If the environment can't reel you in on its own, the music will make sure you're hooked. Sound effects are also used well, including various paper sounds that are completely appropriate for the scenario they're used in.

There's also a video game within this blissful presentation and it's a good one. Tearaway is developer Media Molecule's first 3D platformer after crafting the 2D platforming series, LittleBigPlanet. For the most part, they do a solid job in creating a good platformer that will keep less experienced players interested while offering additional challenges for the seasoned veteran. The messenger's jump is better than Sackboy's oft-maligned jump in LBP but also feels a bit unsatisfying given how short the jump is. There is also combat, in which the messenger must combat waves of little box-shaped enemies called Scraps and keep them from harassing and troubling the rest of the world, but these combat segments are very mundane and feel completely out of place in Tearaway's world; the game may have been better without them. When it comes to traditional metrics, Tearaway doesn't make any waves. 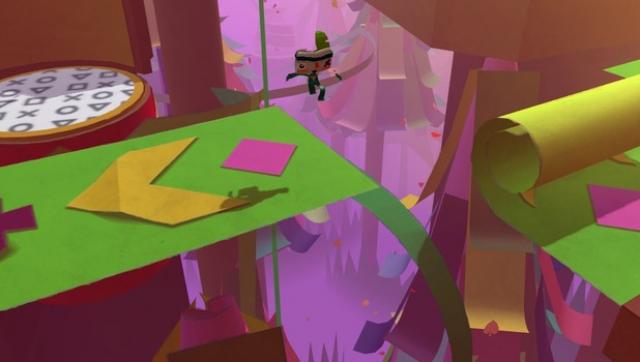 But when the game takes advantage of the PlayStation Vita's features, it becomes very engaging. Players will consistently be interacting with the environment to progress through the game. The touch screen on the front is used to create new paths or trigger new actions. The rear touchpad will (almost) literally put you into the game, as it can be used in specific areas to interact with objects. Pushing "through" the rear touchpad will cause a digital finger (with the size and skin tone you select) to appear on screen. The "You's" fingers are mammoth in comparison to the tiny messenger and will assist him/her in their adventures. It is a bit odd to get used to this at first but once it clicks, it becomes the game's best mechanic. There are also other uses, such as tilting the Vita to move platforms and objects which creates captivating levels, but many of these additional mechanics only show up in the latter stages of the game, which is disappointing.

Artistry isn't just presented to you in Tearaway. Players will get to introduce their own artwork onto the tapestry of Tearaway's environment. Certain characters will ask for something (eyes, a mouth, a tie, etc.) and the player will get to choose a color of construction paper, draw their object of choice and cut it out, then put it onto the character or environment as asked. Those who feel they're not creative enough can also use various pre-made objects. This especially lights up the world in one scene where you're tasked with creating a snowflake. The world then becomes full of your snowflakes and the snow becomes the color you chose. Additionally, you can interact with the environment through the use of the Vita's camera. I took a picture of my couch and then the moose fur was all decked out with my couch. It's really cool to see your own work used in the game like this. 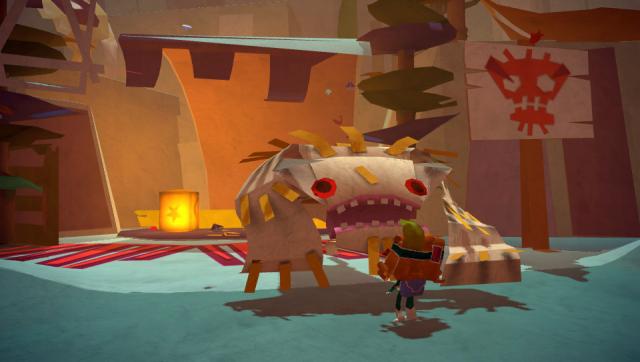 Though all of this is fun, Tearaway's major flaw is that it's so short. The game can be completed in about five or six hours. While there's something to be said about leaving the audience wanting more, it still felt like Tearaway hadn't completely explored all of its possibilities. Collection hounds can keep on playing to collect every hidden object in each level, but even then it pales in comparison to other platformers which can keep the collection hunt going on for longer. One thing that Tearaway does offer is real life paper craft plans. Taking pictures of white objects in-game will give them their color back and you'll receive paper craft plans for that object. These plans can be uploaded to tearaway.me, a community site featuring the best art projects and pictures (including, of course, messenger selfies). This method of bringing the characters of Tearaway into our world is engaging, and combined with the ending of the narrative, poignant. Artistically challenged players may not feel compelled to get into this, however. Also, your interpretation of the game's value may be affected based on your region - Tearaway's price is £19.99/€24.99 in the European region but costs the full $40 in the United States. 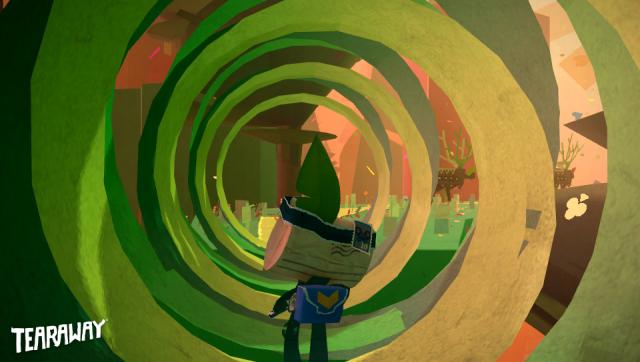 Tearaway isn't the best platformer ever made, but it's quite possibly the happiest one, with a bright paper craft world that brings you in and a narrative that pulls at the heart strings. It also takes advantage of the PlayStation Vita's many features that most games never dare try to utilize, let alone do so effectively. Tearaway is a complete showcase of what the Vita can do and we can only hope that more Vita games will be as ambitious as this in the future.